CHINA Tim Cook: China a leader in many fields

Tim Cook: China a leader in many fields 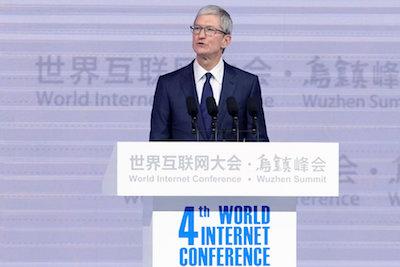 Speaking at the 2017 Fortune Global Forum held in the southern Chinese city of Guangzhou, Cook said he has witnessed a sea change in China over the past quarter century.

Cook said China is already "incredibly innovative" in the software industry and so many applications and ideas can only be created here. China also has a large pool of computer science professionals with skills that are very rare to find anywhere.

The Apple CEO said skills, rather than low labor costs, are what lure foreign companies to China.

"The products we do require advanced tooling. In the United States, I am not sure our tooling engineers can fill a room. In China, you can fill multiple football fields," he said.

Apple now has around 2 million developers using its platform in China.

Cook said many companies have come to recognize the importance of vocational expertise. But China understood that right from the beginning and gave it a leading position in manufacturing.

On other fronts, Cook said China is doing an unbelievable job in poverty reduction, which deserves applause. And the nation is very fixated on doing the right thing to avert climate change, according to Cook.

Turning to regulation, Cook said each country decides on its laws and regulations. As a foreign company, it either participates or stands on the sideline.

"You get in the arena because nothing gets changed from the sideline. When you participate, you are subject to the laws and regulations in the country," he said.