After nearly three months of intensive treatment by the neonatal department of Shanghai Children's Medical Center, a tiny 545 gram baby born 12 weeks premature has grown to nearly two kilograms and been able to go home.

The newborn is only the size of the palm of the palm. (Photo: Chinanews.com)

In mid-October, the tiny infant was transferred to Shanghai Children's Medical Center. The newborn fit into the palm of a hand, its skin was so thin it was almost transparent, and her thighs thinner than an adult's thumb.

The medical staff at the neonatal intensive care unit faced an uphill battle to save the fragile infant. The developed a plan for its respiratory management, nutritional support, and infection prevention. They also adopted the "kangaroo mother care" method, detailed in a World Health Organization guideline published in 2003, which involves frequent skin-to-skin contact and breastfeeding. 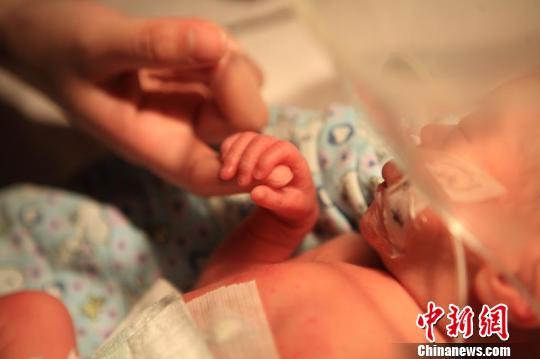 The baby is been taking care of adopting the "Kangaroo mother care" method. (Photo: Chinanews.com)