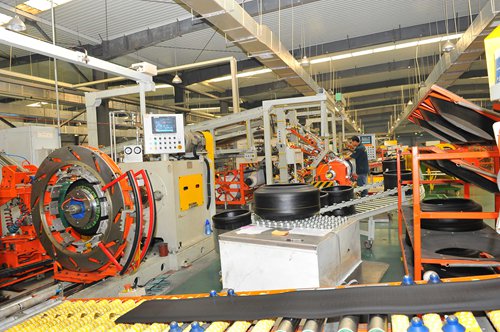 Tougher environmental regulations and tightened financial policies have left Dawang town, dubbed a cradle to China's tire industry, in shambles. An industry-wide consolidation is taking place in China, leaving only the most competitive tire companies, as described in a report released by domestic news portal jiemian.com on September 3. Some tire makers are hedging the domestic risks with production bases overseas.

Dawang town in Dongying, East China's Shandong Province had been experiencing a kind of prosperity rarely seen among towns in northern China.

Its villages have fine cement roads and residential buildings are tidily built with red bricks.

In an industrial zone not far away are the headquarters of several smaller tire companies including Shandong Hongyu Rubber Co and Shandong Yongsheng Rubber Group.

Such an industrial complex has made the town well known in China, earning itself a nickname - Hometown of the Tire.

However, a recession has hit the town hard in recent months - the once crowded streets of Dawang filled with businesspeople, workers and lorries loaded with tires and chemicals are now deserted.

At Yongtai, which once had a plant occupying an area of over 53.3 hectares and employed over 3,000 workers, now only several security guards and bankruptcy lawyers hang around.

A guard said the plant is currently being rented to another tire maker for production purposes and that he is employed by the latter.

The company, established in 1996, had been manufacturing tires, aluminum hubs and plates for cars. At one point, the company extended its business to heating, power supply and sectors related to new energy. In its heydays, the company had assets worth 3.5 billion yuan and had an annual production capacity of 7.5 million radial tires and 180 million kilowatt hours of electricity.

In a 2016 ranking of the 75 best tire makers in the world by US magazine Tire Business, Yongtai occupied the 32nd spot. Meanwhile, in the domestic market, it was listed as the No.10 tire maker. Its products under the "Durun" trademark were also listed as the province's key exporting brands and became the key national project supported by the Ministry of Science and Technology.

Such brands were even auctioned off by a local court with an appraisal value of 9.29 million yuan. Bidding had started at 6.5 million yuan.

But given the recent crisis, creditors now have little hope about getting back what is owed to them.

"The company went bankrupt after its cash chain broke," said an official of the town's economic development bureau, without giving his name.

"Raw material prices have been declining this year, giving more margins to tire makers," Jiang said, noting that now should be a time for profit, not bankruptcy.

However, this round of cyclical benefits came too late for Dawang's insolvent tire makers - their production has been in suspension since last year.

Prices for raw rubber rose 69 percent in 2016, reaching 16,400 yuan per ton by December. And thanks to export limit orders issued by authorities in Thailand, Malaysia and Indonesia as well as China's crackdown on environmental malpractices, rubber prices shot up to 20,837 yuan per ton by February 2017. Prices then fell.

Rubber price fluctuations disrupted the operation of unprepared tire makers, so their large inventories and weak cash flows drove them into a quagmire.

Hengyu, whose plants are just several kilometers away from Yongtai's, fell into the same trap. Also in the liquidation process, Hengyu is now seeking tenants to rent its idle plants and machines.

Shandong is home to about 300 tire companies, accounting for about 60 percent of China's total. Thanks to provinces like Shandong - a key player in the production of synthetic rubber - China has become the world's largest tire producing country.

In 2011, Dawang realized industrial revenue of over 100 billion yuan and soon became the leader among all towns in the province.

Massive spending by the Chinese government following the global financial crisis of 2008 had brought windfalls to Dawang's tire makers by 2010, but by 2012, the move ended up pushing many of them into an overcapacity trap, negatively impacting the town.

Tire makers tried to survive by cutting prices, reducing, and even halting production, borrowing from banks and seeking financial aid from the local government.

Han Xingcai, a former Hengyu employee, said most of the migrant workers who were seeking jobs in Dawang have since left, while an exodus of people have entered the town's real estate sector.

"The skilled workers who once worked here have gone to find plant jobs in other factories in Shandong. Some have even chosen to work in logistics and at hub plants," Han said.

Intensified environmental crackdowns also weighed in. In 2017, over 20 tire makers in Dongying were punished by local environmental authorities.

Adding to economic woes, many companies used each other as collateral. While this made borrowing from banks easier, in case of a default, many companies were involved, according to media.

After a deteriorating external environment began taking its toll in 2015 - when production and export volumes dropped while the costs of raw materials, logistics, financing and labor costs climbed up - smaller firms were then struck again with a consolidation wave, as more competitive companies started posting better earnings.

"A consolidation is taking place," Jiang said. "As a result of bankruptcy and through mergers, big companies will integrate smaller players. The number of companies will be reduced, but production capacity will not shrink too much."

The China Rubber Industry Association pointed out that environmental inspections, more expensive raw materials, rising costs and trade frictions are the major factors pushing China's rubber tire industry toward more intense competition. The phaseout of less competitive firms will be forced to cede the market to those with better performance, the association said.

Besides quality improvement and smart manufacturing that reduces costs, the association also suggested that globalization and differentiated product portfolios can help these struggling companies.

In fact, some tire makers are already one step ahead. Shandong Linglong Tire Co, based in Zhaoyuan, a city about 230 kilometers away from Dongying, has hedged the risks with its production bases overseas. In addition to its base in Thailand, the company announced just in August that it would establish a $990 million plant in Serbia.