CHINA To Chinese netizens, Spring Festival celebration can be a litmus test for patriotism

To Chinese netizens, Spring Festival celebration can be a litmus test for patriotism 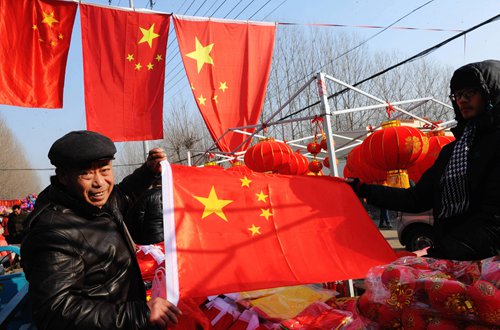 Celebrated for millennia by the Chinese, a new year has always been a time of harmony and happiness. But as the most recent Chinese Lunar New Year proves, the occasion can also get political.

Several Chinese celebrities learned a hard lesson about nationalism and patriotism this month after posting on social media about this year's Chinese Lunar New Year. Some netizens apparently think that how a person refers to, or celebrates, the New Year directly reflects if the person loves China or not.

Supermodel Liu Wen sparked a row on Instagram after wishing her fans a "happy Lunar New Year" instead of "Chinese New Year." Her post was soon flooded by comments from angry Chinese netizens who believe that "Lunar New Year" is a "de-sinicized" way to call the ancient festival.

Ethnic Kazakh actress Reyizha Alimjan's New Year posts on Sina Weibo, in which she said she doesn't celebrate the festival, on the other hand, was charged with "ethnic separatism," attracting thousands of criticisms before the Beijing-born actress had to delete everything on her Weibo.

On February 18, the third day of the Chinese Festival, Liu posted a picture on Instagram of herself and friend Wendi Deng Murdoch with text "Happy Lunar New Year!" After harsh criticism from netizens, Liu deleted her original post and published a new one using the term "Chinese New Year."

"Chinese New Year is a Chinese festival. If you use the term Lunar New Year, it will become a South Korean festival just like how the Dragon Boat festival has become," one netizen said on Instagram. "Are you kneeling down to the South Koreans? It should be Chinese New Year!" another comment read.

Taiwan actor Eddie Peng, who also referred to the "Chinese New Year" as the "Lunar New Year" on Instagram, was also criticized by netizens for his wording.

The traditional Spring Festival in China has increasingly become a national symbol. In recent years, hanging national flags at home alongside Spring Festival couplets has become a new fashion in many Chinese cities and rural areas during Chinese New Year. Many households erect national flags outside their homes. China's five-star red flag can also now be spotted in tourist attractions during the holiday.

To some extent, the concerns of Chinese netizens are not totally unfounded. Apart from China, the same holiday is celebrated by several Southeast Asian and East Asian countries including South Korea, Vietnam and Singapore. But not everyone from these countries are happy to call it "Chinese New Year" and many have tried to alter the term in the English world.

A 2012 blog post on NJ.com by author Yeomin Yoon, a business professor in New Jersey, said the term "Chinese New Year" fans cultural chauvinism. Yoon, a common Korean family name, argues that the correct translation of the name of the holiday should be "Lunar New Year," because it is "more inclusive, smacks less of domination by a majority ethnic group in East and Southeast Asia, and is consistent with the grounds of neutrality."

On change.org, a petition website, a netizen named Anthony Ngo in 2014 petitioned the Sydney city council, which referred to the festival as "Chinese New Year" on its website that year, asking the council to "stop assuming that Lunar New Year is Chinese New Year."

"While you ignore the minority races culture and choose to promote the more dominant one and assume that they are all the same, it is not correct politically," Ngo wrote. The petition found 1,868 supporters.

Such debates, however, never made it to the Chinese marketplace of opinions until Gao Xiaosong, a famous Chinese media personality, said during his talk show in 2013 that the term "Lunar New Year" has been used by South Korean immigrants to replace the Chinese New Year.

"South Korean immigrants in the US, especially in California, have been sparing no effort in lobbying and advocating every year [asking the term to be replaced]. Each year during the Chinese New Year, US mayors, governors and presidents send out new years' wishes, and previously the term they used was 'Chinese New Year.'"

"Following the efforts of Vietnamese and South Korean immigrants … who successfully influenced the government, now US authorities refer to it as 'Lunar New Year' as opposed to 'Chinese New Year' in recent years," according to a book adapted from his talk show.

Although Gao said he is personally okay with the change, as "some things are shared by different ethnics," his show nevertheless aggravated concerns among some Chinese netizens that the festival's Chinese roots will be diluted by the name change.

On Chinese social media, netizens have long been circulating a story that South Korea has "stolen" many Chinese cultural heritages and labeled them as South Korean, including the Dragon Boat Festival, a traditional Chinese festival which [they think] is recognized by the UNESCO as an Intangible Cultural Heritage of South Korea.

In reality, the festival that obtained UNESCO recognition for South Korea is the Gangneung Danoje Festival. Although it shares the same Chinese name, duanwu, as China's Dragon Boat Festival and both fall on May, the month-long Gangneung Danoje Festival is actually very different, celebrating a shamanistic ritual with mask dramas, oral histories and other traditions far different from China's.

China's dragon boat festival was also inscribed in the list of UNESCO Intangible Cultural Heritage, according to UNESCO's official website.

"If it originated from China, it should be called the 'Chinese New Year,'" Wufeng Jifeng, a leftist Chinese netizen, wrote on his Sina Weibo.

Many still question if it is right to pour criticism on the supermodel. "Liu probably has an international team managing her social media accounts, and they probably want to be more inclusive as she has global fans," one netizen remarked.

"Since primary school, I was taught in English class that Spring Festival can also be translated into Lunar New Year. Since when did it become a taboo word?" Another netizen said.

Commonly known as Reyizha in China, the 31-year-old Beijing-born actress posted on February 14 on her Sina Weibo: "To be honest, I don't celebrate this festival. But I still miss my family."

She then explained to a netizen in the comments section that she was talking about Spring Festival, and that she can do nothing about it because she is an ethnic minority. "I can't disrespect my ethnic group," she wrote.

Ethnic Kazakhs celebrate Nowruz, or Nauryz, which falls on March 21, the day of the spring equinox, as their New Year's Day. Most ethnic Kazakhs are Muslim.

The post attracted over 2,000 comments and over 1,000 reposts, many of which criticized the actress's "negative attitude" about Spring Festival, some going as far as panning the actress's religious belief and calling her a Muslim extremist.

Some netizens remarked that Spring Festival is not just a festival for the Han ethnic group, but a festival for the entire Chinese nation. If a person does not celebrate the festival, they feel, then he/she is not identifying with his/her Chinese identity.

Some even dug into the actress' former posts and found that she had sent fans new year's greetings in previous Chinese New Years and even Christmas. This was used as a proof that Chinese Muslims are "becoming less tame and more extreme," according to netizens.

After offering several explanations, Reyizha was forced to delete all of her posts on Sina Weibo. But discussions on whether Muslims should celebrate the Spring Festival continued on questions-and-answers website zhihu.com.

Other commentators sympathize with Liu Wen and Reyizha, saying those netizens are like red guards during the Cultural Revolution (1966-76). "When Liu rose to fame as a supermodel, these netizens idolized her for boosting China's image. Now she makes one little mistake and they scorn her and despise her," Weibo user JAS Miss Guan wrote.