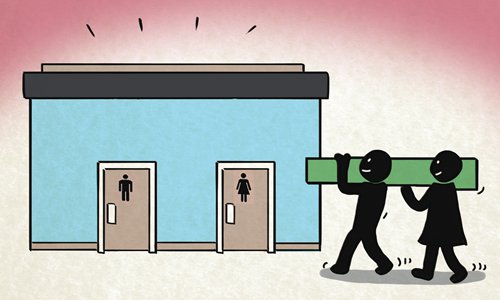 The worst toilet I ever saw was in rural China. We were in the town of Litang, in the far west of Sichuan Province, where there was a Tibetan grassland festival. My friend, a young Beijing girl, had decided we could stay in a Tibetan truck driver's rest stop for the princely sum of 10 yuan ($1.5) a night. The toilet was indescribably filthy. She hadn't noticed. I refused to stay, which was only compounded when the owner saw foreigners and doubled the price.Anyone who has traveled in China's rural areas will have similar stories of appalling facilities - ones built above the pig sty, being forced to do your business in places with no walls or doors, with many prying eyes. Even in downtown Beijing, where facilities have been modernized, you can't guarantee they'll be clean. So the recent announcement by President Xi Jinping, hard on the heels of World Toilet Day, marked every year on November 19, that China's "toilet revolution" is going to extend to all rural parts of the country, hasn't come a moment too soon.  It's already been taking place in tourism hot spots, and an upgrade in facilities in these areas is expected to boost tourist numbers and improve local economies and incomes. As a former tour guide in China, one of the most-asked questions was about the toilets - many Westerners not being used to Asian-style squat toilets (even though some say this posture is better for health), but also the quality of the facilities.But will a mere upgrade in bricks-and-mortar facilities be enough? After all, many in China have put up with relatively primitive sanitation facilities for years, and while they improve their housing, toilet facilities sometimes remain an afterthought.Still today, 57 million Chinese households are without private facilities, among which, 17 million face serious hygiene issues, according to figures quoted in the South China Morning Post. In rural areas, coverage of sanitary toilets is expected to rise to 85 percent by 2020, and 100 percent by 2030. The World Toilet Organization (WTO), an NGO that started World Toilet Day to draw attention to the woeful lack of attention paid to sanitation issues in the developing world, says that for every $1 spent on sanitation and clean water, it saves $4.3 on healthcare costs. The WTO is involved in providing sanitary toilets to schools in rural Henan Province through its Rainbow School Toilet Initiative, as well as other projects in Cambodia and India. This project is not only replacing old "pit-style" toilets in these schools, but is also educating the children about the necessity of hand-washing with soap and other good hygiene habits. It found that schools had been prioritizing decoration over clean toilets, yet across the globe, diarrhoeal diseases kill more children every year than AIDS, malaria and measles combined, the WTO says.Globally, it is thought that up to 1 billion people still practice open defecation, with some 2.5 billion lacking toilets, according to figures from UNICEF. Unsanitary conditions, both during pregnancy and while children are growing up, contribute to a raft of childhood diseases, including stunting and the spread of parasites, which causes malnutrition. Obviously, China does better in this regard than India (which led by Prime Minister Narendra Modi is also trying to tackle the issue) and some countries in Sub-Saharan Africa, but more needs to be done.Changing the mind-set of rural residents who have lived for years with sub-standard facilities is crucial - we've all heard the stories about China's grannies stealing toilet paper from public conveniences in parks, or notices in tourist destinations worldwide that ask people not to stand on the seats of Western-style toilets, but the toilets many rural residents currently use are cheap. They don't require water for flushing, there are no septic tanks to clean or pay for, and don't need products to clean them. Many farmers still use "night soil" as fertilizer.Upgrading toilets in urban areas is relatively easy - there should be sewages systems already installed - however, as we have recently learned from the demolitions of illegal or unsafe residential blocks on Beijing's fringes, many of these cheap apartments also had no private facilities. Once, I went down to look at the communal facilities provided in the basement of my building for people who live there, and they were almost as bad as the ones I saw in Litang. But the type of toilet installed must also suit the environment. The standard toilet we all use has barely been updated since it was first designed in the 19th century. There is no point giving a rural dweller in desert areas a water flushing toilet, or one they can't afford to use as there is no connected sewage system in rural villages with small populations. Organizations such as the WTO and the Bill & Melinda Gates Foundation are working on and offering prizes for the "toilet of the future." Companies and universities in China and abroad have had success in designing eco-friendly waterless toilets that are suitable for rural areas that aren't connected to sewage networks. This will include many tourist destinations, like China's scenic areas, and in the new network of national parks it is going to build. In 2015, the China National Tourism Administration announced it was going to partner with the Gates Foundation to build eco-friendly toilets in China, and it is to be hoped that local officials will give thought to what kind of facilities are needed to suit the conditions, otherwise they will remain unused and unloved. WTO's China project manager told CNN she wants to make toilets "fashionable." I have seen toilets in Chinese tourist sites that have fish tanks and TVs, but I'll settle for ones that are clean, with toilet paper and soap, and where people form an orderly line to use them. It will certainly take a revolution to change some of China's habits, but it is certainly a necessary one.