While protecting the ecology of Mount Fanjingshan, Tongren city in southwest China’s Guizhou province has been committed to developing green industries, including ecotourism, tea production, and edible fungi cultivation, in recent years, as key channels to boost villagers’ incomes. 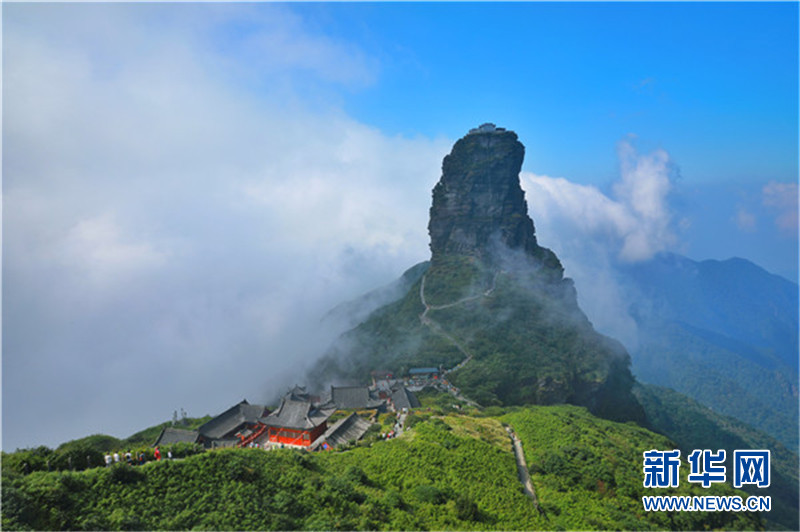 The mountain, a national nature reserve located in an area comprising parts of Jiangkou, Yinjiang and Songtao counties, was inscribed into the World Heritage List as a natural site in 2018. The nature reserve is also a national tourist attraction with the highest 5A-level rating. Moreover, Fanjingshan is home to over 7,000 species of wild plants and animals, including the rare Guizhou snub-nosed monkey.

In 2018, Tongren city released regulations to further protect the mountain and the primitiveness and integrity of its natural ecology. According to the regulations, the Fanjingshan National Nature Reserve and its neighboring areas are included within the scope of conservation efforts.

To advance protection and development in parallel, Tongren has taken full advantage of the mountain’s ecological resources to develop ecotourism, said Ye Dongkang, vice mayor of the city.

Zhaisha village, mainly inhabited by the Dong ethnic group, was a poor village lying at the foot of the mountain. As of 2010, the per capita net income of villagers was less than 2,000 yuan (about $313) and most of the inhabitants in the village made a living by farming. Like Zhaisha, there are 22 villages with more than 20,000 residents near the Mount Fanjingshan scenic spot.

“After going down the mountain, many visitors will go straight to our village to book rooms at homestays and enjoy home-cooked meals and a campfire party. Tourists need to book rooms half a month in advance during holidays,” said villager Xia Yongfa, who transformed his old house into an agritainment facility. Xia garnered hundreds of thousands of yuan in the first year of his business.

Now over 1,200 villagers like Xia living near the scenic spot have become directly engaged in delivering tourism-related services, including catering, accommodation and entertainment, helping more than 10,000 villagers in the area to increase their incomes.

Meanwhile, the tea industry has also flourished in Tongren. In the city’s Jiangkou county, a major green tea producer in Guizhou named Guizhou Gui Tea Group Co., Ltd. built a tea industrial park in May 2017. In just a few years, the group’s subsidiary located in the park, Guizhou Tongren Gui Tea Co., Ltd., has become well-known for its production of matcha, a finely ground powder of specially grown and processed green tea leaves. The company now sells its tea products to over 10 countries and regions.

The city plans to establish a tea planting base covering 6,860 hectares with a projected annual matcha output of 4,000 tons. This will increase the per capita annual income of 12,000 tea growers by more than 3,000 yuan.

In another development, Tongren city has seen a thriving edible fungus industry spring up in recent years, with its total output value surpassing 2.2 billion yuan in the first half of this year.