CHINA Too early for optimism despite plunge in new Hubei COVID-19 cases: analysts

Too early for optimism despite plunge in new Hubei COVID-19 cases: analysts 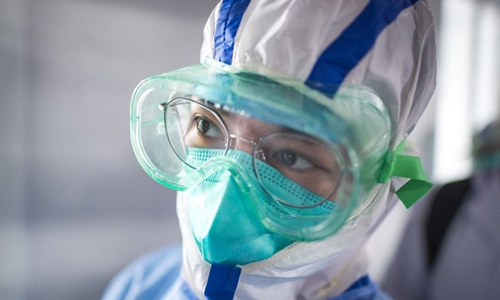 Daily reports of confirmed novel coronavirus pneumonia (COVID-19) cases in Hubei, the epicenter of the outbreak, plunged suddenly on Thursday following a dramatic surge the previous day. Experts believe the shift was due to local government's adoption of a new method to diagnose the virus, which allowed hospitals to clear a backlog of suspected cases on Wednesday.

But the drop does not indicate an optimistic situation in Hubei as some netizens expected. Hubei still faces critical challenges with a large number of patients and pressure to prevent and control the virus, experts said.

A suspected case will be clinically diagnosed as long as the patient shows pulmonary lesions typical of the novel coronavirus pneumonia following a CT scan, even if they have not been given a nucleic acid test.

Hubei from Wednesday began to include the number of clinically diagnosed cases in its daily updated report.

Yang Gonghuan, a former vice director of the Chinese Center for Disease Control and Prevention, told the Global Times on Friday that Wednesday saw hospitals clear a backlog of suspected cases, and that Thursday's plunge showed cases were being cleared.

However, the number of confirmed cases in Hubei will not remain at previous levels of around 1,000 to 2,000, as the local government has increased health screenings of local residents, Yang said.

"A relatively high number of confirmed cases in the near future could instead offer us some relief as we know it's the result of the government's efforts to trace and control infection sources," Yang said.

She said the newly appointed officials in Hubei have proven more capable of controlling the epidemic situation.

Seeing the plunge in Hubei's daily reports, some netizens were excited, commenting that victory over the virus is no longer distant.

However, Yang said it is far too early to celebrate or become too optimistic as the epicenter's total number of patients has not significantly dropped and the prevention and control situation is still serious.

Chen Yixin, who was recently appointed deputy head of a central government group to guide the epidemic control work in Hubei Province, said on Tuesday that the total number of infections in Wuhan has not been fully identified and the number of people being newly infected may still be relatively large.

Yang suggested the Hubei government adopt a new daily report methodology, reporting numbers based on the time when patients begin to show symptoms rather than when they are diagnosed, to better assess the effectiveness of the government's prevention and control measures.