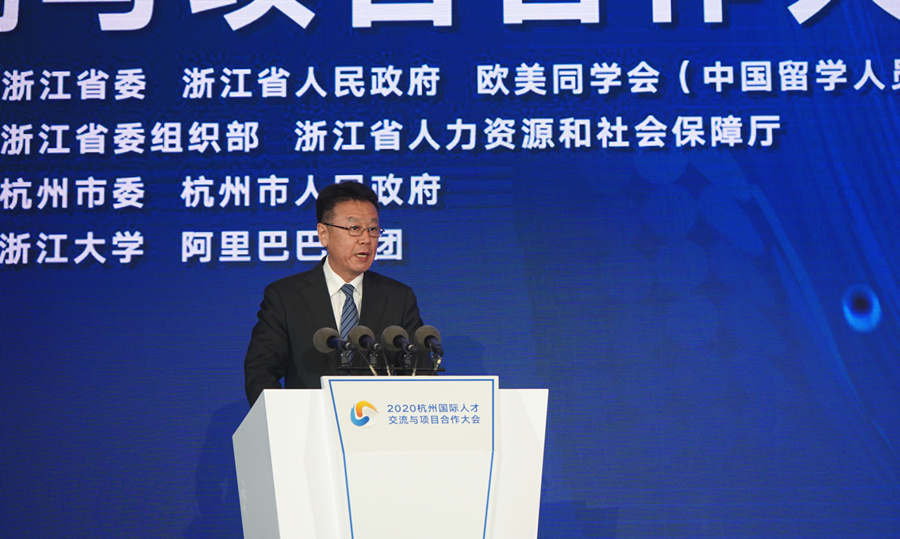 Zhang Jianguo, head of the China Society for Research on International Professional Personnel Exchange and Development, announces the results of the annual survey, titled Amazing China — the Most Attractive Chinese Cities for Expats 2019, at the 2020 Hangzhou International Human Resources Exchanges and Cooperation Conference on Nov. 8 in Hangzhou. (Photo: China.org.cn)

With a multitude of cultural, historical, and natural conditions, different Chinese cities exhibit their own unique features. When it comes to living in China and choosing which city they want to settle in, some foreigners suffer from choice anxiety. Now, however, that choice has been made a little easier courtesy of a list of the most livable cities in China as ranked by China experts and expats living in China.

The annual survey, titled Amazing China - the Most Attractive Chinese Cities for Expats 2019, unveiled its results at the 2020 Hangzhou International Human Resources Exchanges and Cooperation Conference on Nov. 8. The event took place in Hangzhou, the capital of Zhejiang province and one of the seven ancient capitals of China.

Zhang Jianguo, head of the China Society for Research on International Professional Personnel Exchange and Development, announced the results, naming Shanghai, Beijing, Shenzhen, Hangzhou, Guangzhou, Hefei, Nanjing, Chengdu, Qingdao, and Suzhou to be the top 10 most attractive cities for expats in China.

Starting in 2010, this is the tenth time the survey has been held. This year, five cities from the Yangtze River Delta region - Shanghai, Hangzhou, Hefei, Nanjing, and Suzhou - made the list.

Zhang announced that Shanghai has toped the list for nine consecutive years and there are four cities-Shanghai, Beijing, Hangzhou, and Shenzhen-on the list since the first time the survey has been launched. Zhang was the former vice minister of the Ministry of Science and Technology (MOST) and former director of the State Administration of Foreign Experts Affairs.

Between February and June this year, foreign judges, including Nobel Prize winners, Chinese Government Friendship Award-winning experts, and other experts living in China, voted online and chose between the 39 candidate cities. Results were analyzed from 5,921 signed votes from 99 top foreign experts as well as other foreign participants.

In addition to the 10 most attractive cities that made the list, the survey also listed cities with the most potential to attract expats, namely, Xi'an, Ningbo, Tianjin, Xiamen, Jinan, Changchun, Dongguan, Changsha, Dalian, and Kunming.

The annual survey's goal is to promote "Opening up at City Level and Bringing in Talents from Overseas." The evaluation was based on each city's ability to attract foreign talents, related services for these talents, and to what extent they can contribute their services to the greater public. The results were given according to 23 indicators in five categories, including policy incentives, governance environment, working and living conditions, and scientific innovation.

The organizers hope that the list will help showcase the efforts Chinese cities have made in attracting overseas talents as well as help Chinese cities better understand the benefits that foreign talents working in China can provide, thus guiding cities to improve their competence in attracting talents from overseas.

With continued improvement to China's comprehensive national strength, more and more foreign experts will opt to work and start businesses in China. In recent years, China has implemented a work permit system for foreigners coming to China and a visa system for expats. This has promoted government affairs as well as the related policy, work, and living environments of Chinese cities, allowing more expats to enjoy better employment and lifestyle opportunities in China.

The survey was conducted by the International Talents magazine under the approval of the MOST. The organizer Foreign Talent Research Center and Dataway provided data analysis of the survey.