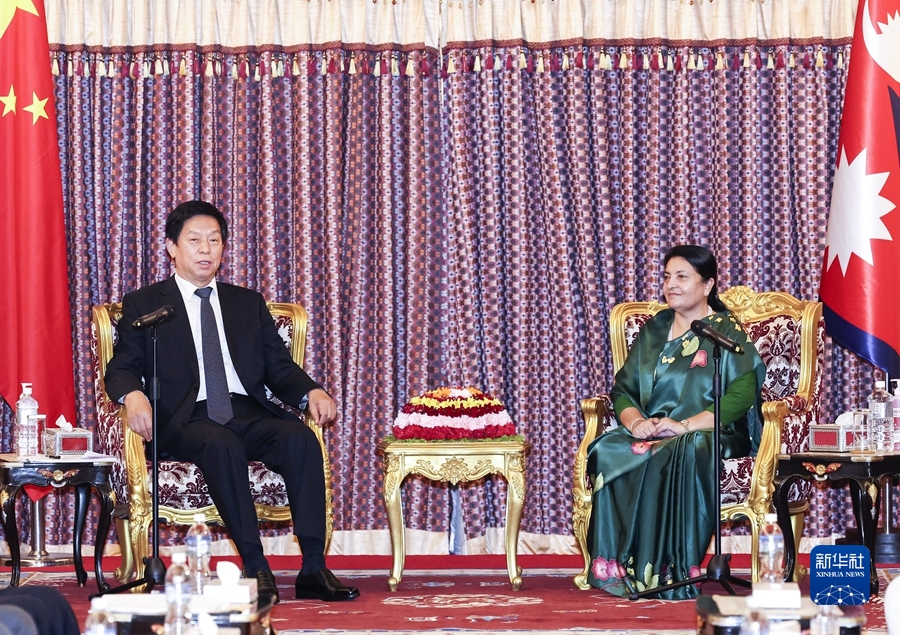 While meeting with Bhandari, Li first conveyed cordial greetings and best wishes from Chinese President Xi Jinping. Li said that China and Nepal are linked by mountains and rivers, and the two peoples have been enjoying friendly relations for generations.

President Xi paid a historic state visit to Nepal in 2019, during which the two heads of state elevated the China-Nepal relationship to a strategic partnership of cooperation featuring ever-lasting friendship for development and prosperity, offering strategic guidance for the long-term development of bilateral ties, Li said.

He thanked the Nepalese side for unswervingly adhering to the one-China principle, and supporting China's position on the Taiwan question and issues concerning Tibet, Xinjiang and human rights.

China will continue to firmly support Nepal's efforts to safeguard its sovereign independence and territorial integrity, to achieve prosperity and strength, Li said.

He welcomed the Nepalese side to actively participate in the Global Development Initiative and Global Security Initiative proposed by Xi, and congratulated Nepal for its upcoming National Day on Sept. 20.

Asking Li to convey her sincere regards to Xi, Bhandari said Xi's visit to Nepal in 2019 is a milestone in the history of the two countries' bilateral relations.

China has always been Nepal's most reliable good friend and partner, she said, expressing gratitude to China for its selfless help to Nepal in economic and social development, earthquake rescue and relief, and the fight against COVID-19.

With its rapid development, China has become a model of global development and played an important role in safeguarding world peace and stability, she said.

Bhandari expressed hope that Nepal and China will strengthen practical cooperation in various fields and push forward the implementation of important projects.

When meeting with Deuba, Li said China has always regarded Nepal as a priority in neighborhood diplomacy. The two sides should continue to understand and support each other on issues concerning each other's core interests and major concerns, and jointly uphold true multilateralism.

Li called for advancing high-quality Belt and Road cooperation, strengthening exchanges and cooperation in trade and investment, infrastructure, customs clearance and other areas, and jointly building the Trans-Himalayan Multi-Dimensional Connectivity Network to bring tangible benefits to the people of both countries.

For his part, Deuba said that both Nepal and China uphold the Five Principles of Peaceful Coexistence, and the bilateral ties have enjoyed a solid political foundation. Nepal's development transformation needs China's support and help, he added.

Nepal is ready to strengthen friendly exchanges with China at various levels and expand practical cooperation with China in areas such as economy, people's livelihood, education, tourism and culture, so as to realize common development and prosperity, Deuba said.

In his separate meetings with Sapkota and Timilsina, Li said China's NPC is ready to work with Nepal's parliament to implement the important consensus reached between the leaders of the two countries, promote closer exchanges between their special committees as well as friendship groups, strengthen exchanges on governance experience and provide legal support for the practical cooperation between the two countries.

Sapkota said China's foreign policies have fully embodied the notion of win-win cooperation underlined by Xi, expressing his hope that the legislatures of the two countries will further their close exchanges, and promote the implementation of projects in connectivity, livelihood improvement and other areas.

Timilsina said Nepal's parliament actively supports the Belt and Road construction and is willing to learn from China's experience in economic and social development as well as in poverty alleviation.

Li briefed the Nepalese side about the upcoming 20th National Congress of the Communist Party of China (CPC).

The Nepalese leaders said that as a friendly neighboring country, Nepal is happy with the great development achievements of the Chinese people under the leadership of the CPC.

Under the leadership of Xi, general secretary of the CPC Central Committee, China will surely be able to successfully realize the second centenary goal, they said, adding that they wish the 20th CPC National Congress a success.

The Nepalese leaders unanimously reiterated that Nepal has always firmly adhered to the one-China principle and will not allow any force to use the Nepalese territory for anti-Chinese activities or harming China's interests.

Li also signed with Sapkota a memorandum of understanding on cooperation between the NPC of China and Nepal's House of Representatives, met with Nepalese Foreign Minister Narayan Khadka and visited the Bhaktapur Durbar Square, which is undergoing post-quake reconstruction.