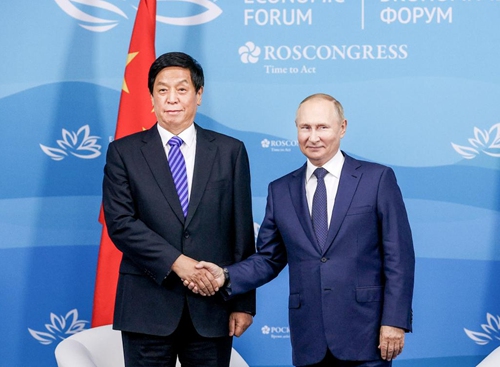 During his visit, Li met with Russian President Vladimir Putin in the country's far eastern city of Vladivostok, held talks with Volodin and Russian Federation Council Speaker Valentina Matviyenko respectively in Moscow, and also met with leaders of the five State Duma factions.

When meeting with the Russian president, Li conveyed cordial greetings and best wishes from Chinese President Xi Jinping to Putin. He said that under the strategic guidance and personal efforts of President Xi and President Putin, the China-Russia comprehensive strategic partnership of coordination for a new era has maintained a strong momentum of development.

Both China and Russia are at a critical historical stage of development and revitalization, enjoying great potential and broad prospects for cooperation, Li said.

The top Chinese legislator said he firmly believes that under the leadership of President Xi and President Putin, the two sides will raise the bilateral ties to a new level and will follow the development path in line with their national conditions and achieve the great goals of their respective development and national rejuvenation.

Li also congratulated Russia on successfully hosting the 7th Eastern Economic Forum and briefed on the upcoming 20th National Congress of the Communist Party of China.

Putin asked Li to convey his best wishes to President Xi. He said that the Russia-China comprehensive strategic partnership of coordination for a new era is special and important, and that the Russian side is satisfied with bilateral relations and cooperation with China in various fields.

Russia-China trade, especially against the backdrop of the COVID-19 pandemic, has shown a sound momentum of growth, Putin said, expressing his belief that the two sides will achieve greater goals of cooperation in this area.

More exchanges between the Russian and Chinese legislatures will play a positive role in promoting the development of bilateral relations, Putin said. He also wished the 20th National Congress of the Communist Party of China a success.

During his talks with Volodin and Matviyenko, Li said that the important task of cooperation between the legislative bodies of China and Russia is to promote the implementation of the important consensus reached by the two heads of state and provide legal protection for the healthy and stable development of bilateral relations.

The NPC will continue to deepen exchanges and cooperation with the Russian State Duma and Federation Council, tap the potential of the mechanism for regular exchanges, maintain a good momentum of high-level exchanges, and promote exchanges among friendship groups and special committees, Li said.

Li said that the NPC is ready to work with the two institutions to create a favorable environment for practical cooperation through legislation as well as examination and approval of treaties and agreements.

He added that the two sides should strengthen exchanges of experience on national governance and legislation regarding fighting against external interference, sanctions and long-arm jurisdiction, among others.

Li thanked the Russian side for firmly supporting China on the Taiwan question.

Both Volodin and Matviyenko once again condemned Speaker of the US House of Representatives Nancy Pelosi's visit to China's Taiwan region, saying that Russia firmly adheres to the one-China policy and is willing to deepen cooperation with China on the basis of mutual respect, equality and mutual benefit.

Volodin said that the legislative bodies of Russia and China should further upgrade their cooperation, expand cooperation models, enrich cooperation content, so as to jointly implement the important consensus reached by the two heads of state and contribute to the development of bilateral relations.

Matviyenko extended congratulations on the great achievements made by the Chinese people under the leadership of the Communist Party of China. She said that the in-depth development of Russia-China relations has given the legislative bodies a new task of cooperation, and that both sides should actively promote cooperation in such fields as politics, economy, trade, finance and youth, as well as enhance sub-national, people-to-people exchanges and cultural cooperation.

When meeting with leaders of the five State Duma factions, Li said that all the groups have demonstrated their support to enhancing friendly cooperation with China, showing that it is the broad consensus of all parties and people from all walks of life in Russia to develop the China-Russia comprehensive strategic partnership of coordination for a new era.

China is ready to maintain close contact and exchanges with all parties in Russia to consolidate the foundation of the friendship and practical cooperation between the two countries, he said.

Leaders of the five State Duma factions expressed their willingness to play an active role in intensifying inter-party exchanges between Russia and China, and make unremitting efforts to deepen the development of Russia-China relations, so as to benefit the two countries and their people.

During his stay in Moscow, Li laid a wreath at the Tomb of the Unknown Soldier and visited Vladimir Lenin's former residence. 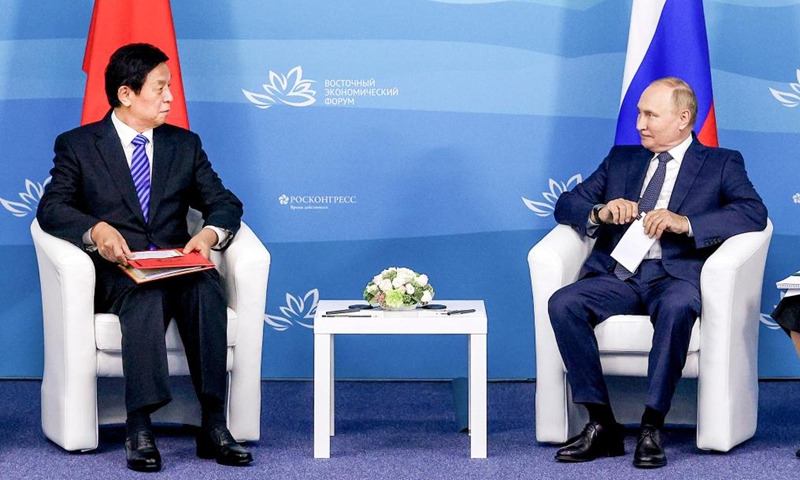