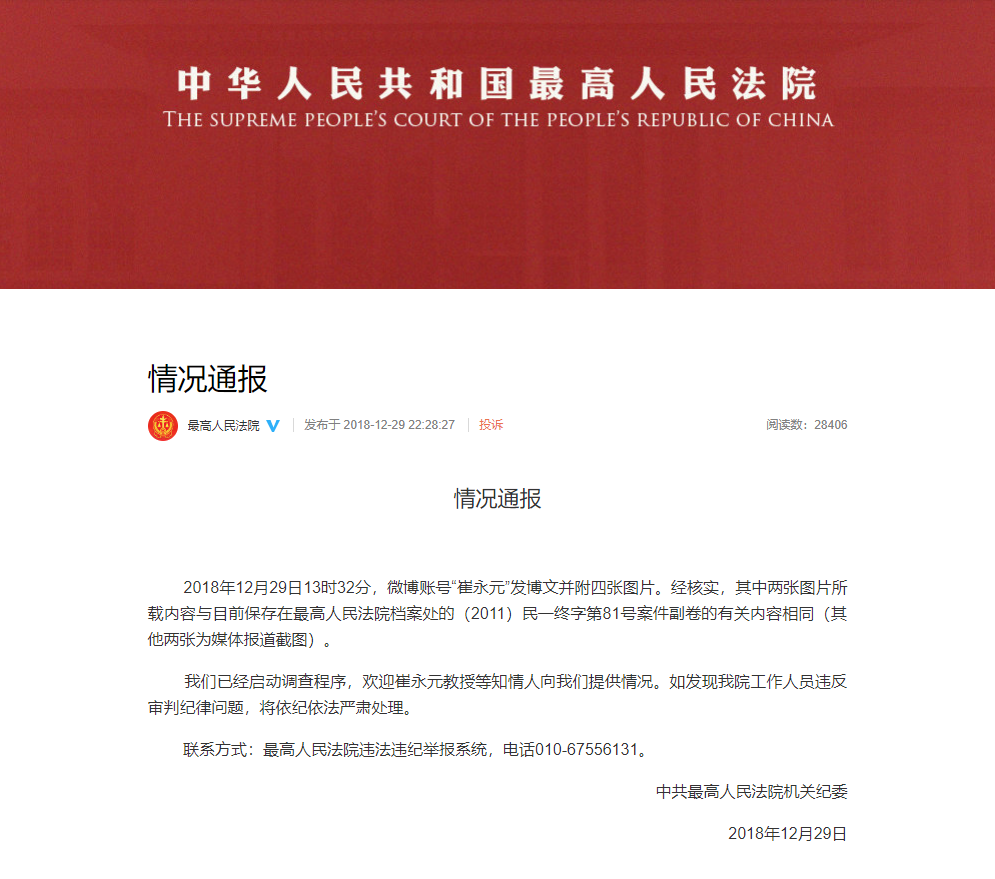 China's Supreme People's Court announced on Saturday that it has started an investigation into the missing files of a mining rights case involving over 100 billion yuan ($15 billion), after the disclosure made by former TV host Cui Yongyuan stirred a wave on social media."We welcome insiders such as professor Cui to provide information. If we find that our staff violated the rules and regulations, we will deal with it seriously," the court said in a statement.Cui posted on his Sina Weibo account on Wednesday, saying that the files of the mining rights case in Northwest China's Shaanxi Province have been missing for two years. "Can thieves enter into the [court]? Even a mouse can not!" Cui posted, asking the Supreme People's Court to give an explanation.On Thursday, the Supreme People's Court denied the missing of files, saying that the verdict had been delivered to the litigants in December 2017 and has been publicized online. The files in the second trial had been preserved in the court's records division in September 2018, The Beijing News reported.The court said that accusations that files were missing or stolen was a "rumor," The Beijing News said.Cui said late Saturday on his Sina Weibo account that "it is a progress from confirming the accusation as a rumor to starting an investigation. I am willing to cooperate and participate in the investigation and let us discover the truth together."The posts of Cui, who is also the whistle blower of the movie star Fan Bingbing tax evasion scandal, have quickly made a splash on Chinese social media and triggered wide coverage and media reports into the case.The dispute between Yulin Kechley Energy Investment Company and the Xi'an Geology and Mineral Exploration and Development Institute under Shaanxi Provincial Bureau of Geology and Mineral Resources has been dubbed the North Shaanxi Billion Mineral Rights Case by the public.The two parties had reached an agreement that allowed Kechley to exploit mining rights worth 100 billion yuan but the latter broke the contract and transferred the mining rights to another company. The two parties therefore had been disputing the ownership of the mining rights for 12 years.In November 2006, the Shaanxi Provincial High People's Court deemed that Kechley won the case. The Xi'an Geology and Mineral Exploration and Development Institute appealed to the Supreme People's Court who, in 2009, sending the case back to the provincial court for a retrial, in which the court ordered that the contract was invalid.In December 2017, the case was adjudicated by the Supreme People's Court. The private enterprise Kechley finally won the lawsuit and media reports said the case was regarded as a landmark case of the central government ruling the country by law and protecting the property rights of private enterprises.The China Central Television reported in early December that the case had been executed by the Shaanxi Provincial High People's Court for nearly a year without any progress.Insiders told the China Business Journal that all the files of the second trial were lost in late November 2016, a year before the verdict. Just 20 days before the loss, Zhao Faqi, the legal representative of Kechley, had exposed that the senior officials in Shaanxi had interfered in the case, the journal reported Sunday. Chinatimes said on Sunday it has received video footage allegedly made by Wang Linqing, a judge from the Supreme People's Court, who was said responsible for the case and found the files in his office were stolen. Strangely, the two surveillance cameras outside his office were deemed as broken, he said in the video.   China Business Journal reported that after the loss, the Supreme People's court had searched for a time and found that the cameras were broken. However, after two years, the court neither reported the theft to the police nor launched an internal investigation. Moreover, the court did not question anybody even though the files are still missing.