Law on healthcare passed, punishing those who disturb medical order 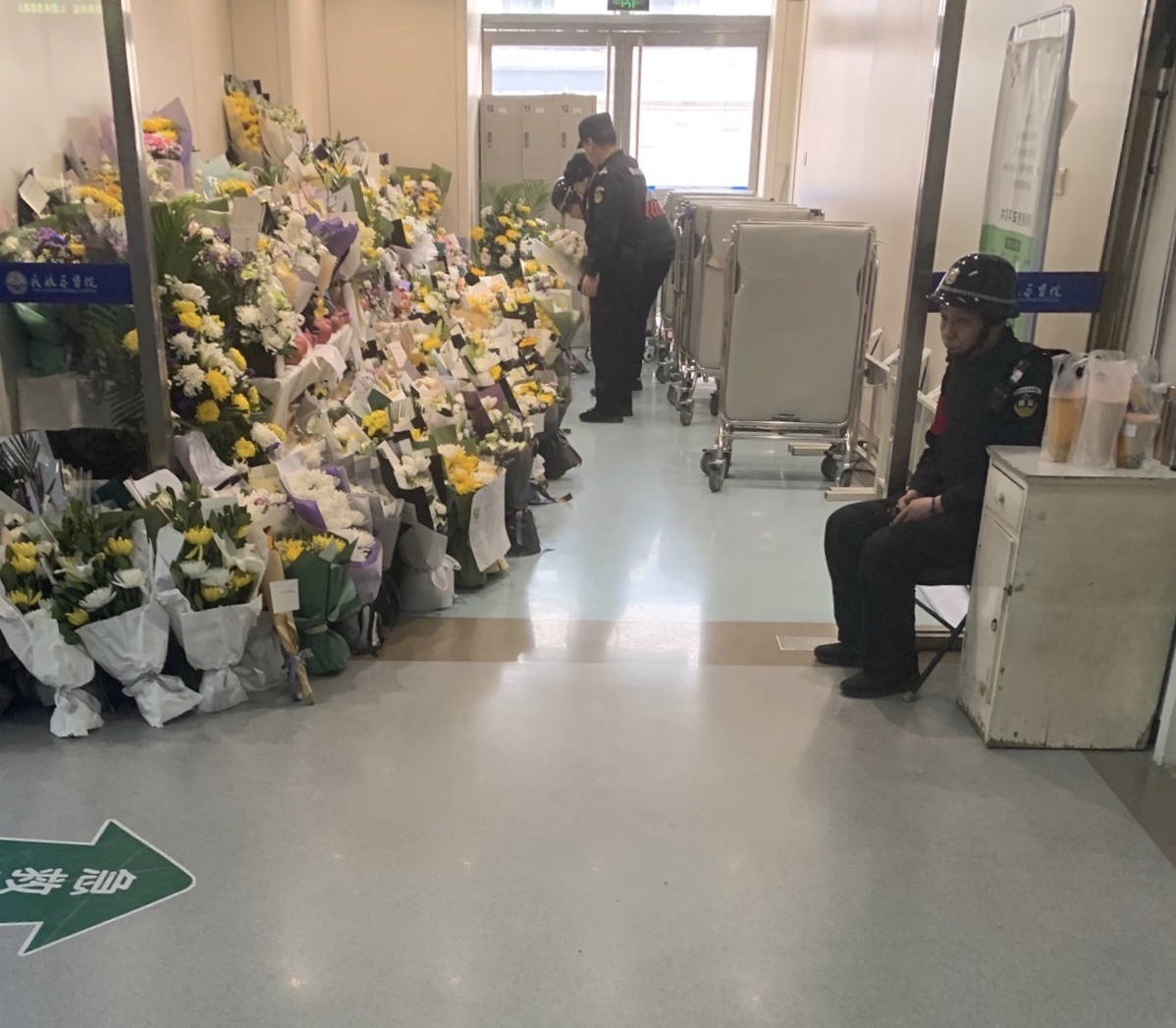 Staff members of the Civil Aviation General Hospital arrange flowers sent by grieving citizens in Beijing on Sunday. On Tuesday, Yang Wen, a doctor working in the emergency department at Civil Aviation General Hospital in Beijing, was stabbed by Sun Wenbin, a patient's relative. She died early the next day from serious neck injuries. [Photo by Wu Xiaohui/China Daily]

China's top legislature and health commission have condemned the fatal stabbing of a doctor at a Beijing hospital by a patient's relative last week.

"Instead of a simple medical dispute, the stabbing was a serious offense. Any harm to medical staff cannot be tolerated," Zhao Ning, head of the National Health Commissions' law and regulation division, said on Saturday.

She made the remark at a news conference after the Standing Committee of the National People's Congress, the top legislative body, voted to pass the country's first fundamental and comprehensive law on basic medical and healthcare on Saturday.

Yuan Jie, an official from the NPC Standing Committee's Legislative Affairs Commission, highlighted the protection for medical staff in the law during the news conference, adding that assaults on medical workers must be condemned by moral standards and punished by the law.

In a bid to deter illegal acts targeting medical staff and institutions, the law stipulates that the personal safety and dignity of medical workers must not be infringed upon and that their legitimate rights are protected by law.

On Tuesday, Yang Wen, who was working in the emergency department at Civil Aviation General Hospital in Beijing, was stabbed by Sun Wenbin, a patient's relative. She died early the next day from serious neck injuries.

The city's prosecutors approved the arrest of Sun, 55, on a charge of intentional homicide on Friday.

Calling for all walks of life to care about and respect medical workers, keep the medical environment in order and establish better relationships between hospitals and patients, the law also bans any organization or individual from threatening or harming the personal safety or dignity of medical staff.

It clarifies that those disturbing the medical environment, threatening or harming medical workers' personal safety and dignity, or illegally obtaining, using or disclosing people's private healthcare information, will be given administrative punishments, such as detentions or fines.

The attack on the doctor sparked concern among political advisers and the Chinese Medical Doctor Association.

"About 6 million medical workers are responsible for the healthcare of 1.4 billion Chinese people, which has been a big difficulty. If the work environment of medical staff cannot be kept in order, the damage will affect residents in the end," said political adviser Huang Yuguang, a Chinese People's Political Consultative Conference member who works at Peking Union Medical College Hospital.

Ling Feng, another CPPCC member, said medical staff should learn from such tragedies.

"Disputes between hospitals and patients won't be prevented if medical workers are not warm or sympathetic enough," said Ling, a doctor from Xuanwu Hospital Capital Medical University.