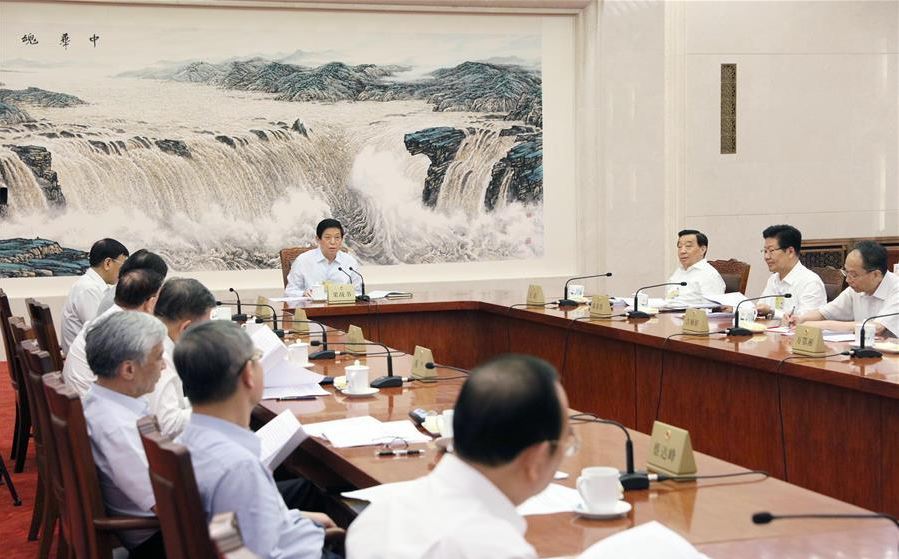 Li Zhanshu, chairman of the National People's Congress (NPC) Standing Committee, presides over the 12th chairpersons' meeting of the 13th NPC Standing Committee at the Great Hall of the People in Beijing, capital of China, Aug. 30, 2018. (Photo: Xinhua/Liu Weibing)

BEIJING, Aug. 30 (Xinhua) -- China's top legislature Thursday heard several reports on the deliberation of bills and drafts at its chairpersons' meeting, according to a statement issued after the meeting.

Li Fei, chairman of the NPC's Constitution and Law Committee, introduced the review results of the draft e-commerce and soil pollution and control laws, and draft amendments to the Individual Income Tax Law.

Zhang Yesui, chairman of the NPC's Foreign Affairs Committee, reported on review results on a treaty of extradition between China and Barbados.

Yang Zhenwu, secretary-general of the NPC Standing Committee, made reports on deputy qualifications, as well as official appointments and dismissals.

The reports will be submitted for review at the ongoing bimonthly session of the NPC Standing Committee running from Monday to Friday.