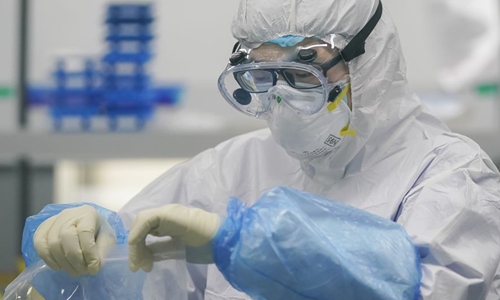 The Standing Committee of the 13th National People's Congress (NPC), China's top legislature, started its 17th session on Sunday, during which lawmakers reviewed a series of draft laws and law revisions regarding the prevention and control of environmental pollution by solid waste, as well as biosecurity.

The moves could indicate that relevant discussions will be at the center of the upcoming national "two sessions" as the COVID-19 pandemic is brought under control in China, observers said on Sunday.

The Sunday session deliberated the revisions of the law on solid waste pollution prevention and management, which stresses trash classification and overall management in urban and suburban areas. It also calls for strengthened management of medical waste, especially that used to respond to a major epidemic, as well as environmental sanitation in farmers' markets and agricultural products wholesale markets.

The NPC Constitution and Law Committee said that the relevant revision is ready for consideration by the standing committee session for deliberation and approval.

The improvement of monitoring, early warnings, and reporting and origin tracking systems for biosecurity risks are also mentioned in the draft.

To prevent and control infectious diseases as well as animal and plant epidemics, the draft law also made amendments to include monitoring and early warning systems, to demand relevant institutions gather, analyze and report relevant information, to make forecasts on emerging diseases and epidemic trends. State Council departments and governments above the county-level should issue timely warnings to the public taking appropriate response and control measures.

The draft law also regulates bio-security management for laboratories, human genetic resources, and biological resources. Also, the prevention of bioterrorism and bio-weapon threats, building of bio-security capacities and other aspects have been included, and related legal responsibilities clarified.

The openings of the annual "two sessions" of the NPC and the National Committee of the Chinese People's Political Consultative Conference, the nation's top political advisory body, are usually held on March 5 and March 3, respectively. The postponement of the key events in the country's political calendar this year is widely seen as part of the effort by top authorities to prioritize the prevention and control of COVID-19.

During the Sunday event, the NPC Agriculture and Rural Affairs Committee called for definite requirements regarding the approval and quarantine inspection related to the utilization of wild animals except for consumption purposes, and for translating such requirements into legal form in a timely manner.

Such topics are not only in line with the requirements of the country's current epidemic fight — but they are also relevant to China's development in a sustainable fashion as well as the benefit of the public, Luo Yameng, a Beijing-based urban management expert, told the Global Times.

Lawmakers are also deliberating a draft decision to authorize the State Council, China's cabinet, to temporarily adjust relevant laws and regulations in the China (Hainan) Pilot Free Trade Zone, as well as a proposal to submit a draft amendment to the Copyright Law, among others.

Zhi Zhenfeng, a legal expert at the Chinese Academy of Social Sciences in Beijing, noted that such topics are likely to be in the spotlight during the national sessions, as they would help inject new impetus into the country's socio-economic development as the epidemic ebbs.