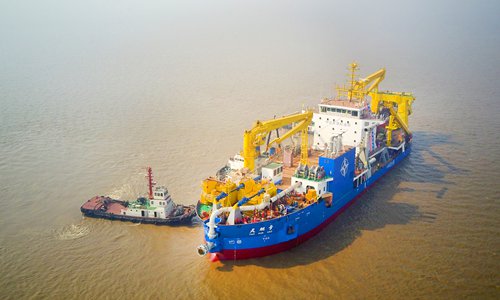 Shanghai's Zhenhua Heavy Industry Corporation (ZPMC), China's world-beating port machinery manufacturer, has hailed the country's decision to ban exports of the company's large dredgers. The head of the company said that it will prevent the vessels from being misused but will not affect the company itself in operating them worldwide for civilian projects. Zhu Lianyu, ZPMC's Vice Chairman and Party Secretary, made the statement during an interview with the Global Times on December 20. ZPMC is a world-renowned heavy-duty equipment manufacturer, and a major shareholder of the China Communication Construction Corporation (CCCC), which sits among the top 500 conglomerates in the world, according to the company website.ZPMC is also the maker of Tiankun, Asia's largest and most advanced cutter-suction dredger, which made its debut in Qidong, East China's Jiangsu Province in November.The 140-meter-long vessel equipped with a cutter power of 6,600 kilowatts can excavate 6,000 cubic meters an hour at a maximum depth of 35 meters.According to CCCC, Tiankun leads the list of such vessels in the world in terms of delivery distance and a number of other metrics.The all-electric vessel is equipped with a dual positioning system and unlimited global navigation. Its advanced systems allow it to carry out unmanned dredging and monitoring operations in ports, coastal waters, and deep-sea operations.Based on Tiankun's "island-building and expanding capability in the South China Sea," Chinese internet users nicknamed the vessel "China's map composer."However, according to a directive jointly issued by the Chinese Ministry of Commerce and the General Administration of Customs in May, starting June 1, large dredgers with a large carrying capacity and installed power that can dig more than 15 meters deep face export restrictions. "It is correct to impose such an export ban from the perspective of national security," Zhu told the Global Times, "as the ban is not aimed at restricting these vessels from providing services overseas, but at preventing their misuse."Zhu added that "as long as the ships are operated by Chinese companies, we can still provide services for civilian infrastructure projects."Trial phase Phase 4 of the Shanghai Yangshan Deep Water Port, the world's biggest automated container terminal, started trial operations on December 10, Xinhua News Agency reported.The project uses automated handling equipment designed and manufactured in China. The machinery used for loading and unloading, including a bridge crane, an automated guided vehicle (AGV) and a rail-mounted gantry crane, are all made in China by ZPMC.The project covers 2.23 million square meters and has a 2,350-meter shoreline. Once it enters full operation, the fourth phase of the Yangshan Port will initially be able to handle 4 million TEUs (twenty-foot equivalent units). The number will expand to 6.3 million TEUs at a later stage, Xinhua said.The port will help consolidate Shanghai's standing as the world's busiest container port and further support the city's efforts to become a world shipping center.While increasing ports' handling efficiency, it also reduces carbon emissions by up to 10 percent, Chen Wuyuan, president of the Shanghai International Port Group, was quoted by the report as saying.In the Global Times interview, Zhu revealed that as the trial operation has already begun, the company is eyeing the international market. The company is also building two automated ports in Italy and Abu Dhabi in the United Arab Emirates."The contracts for both projects have been signed and the Italian VADO port will be put into use by 2019," Zhu said. Tough decisionsAccording to the company head, building automated ports is a tough decision for some countries, as the construction cost is higher than that of traditional ports. Moreover, since the technology is relatively new, many see it as less efficient than traditional ones, even though China already has three automated ports running. Zhu explained that his company's competitiveness in the automated port-building business lies in the fact that it is the only manufacturer in the world capable of delivering a full-package construction independently, while other companies have to work on different parts and combine them later for one project. ZPMC has taken the largest market share of port machines for 19 consecutive years, Xinhua reported on July 29.