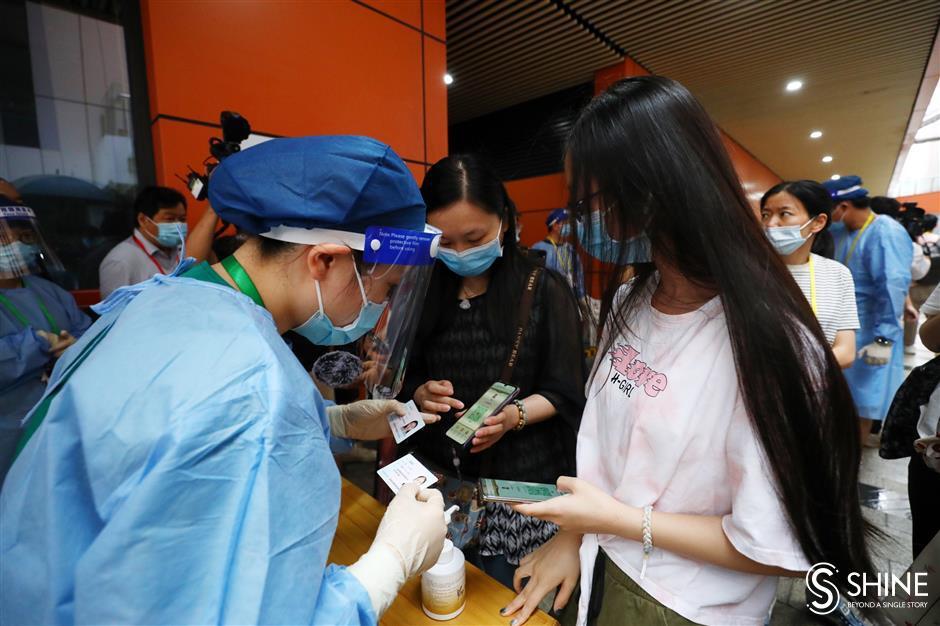 A teenager and her mother show their ID cards and health QR codes to medical staff before getting into the Jing'an Sports Center in Jing'an District, one of the vaccination sites in city.

More than 90 percent of teenagers aged between 15 and 17 in downtown Shanghai's Jing'an District have made reservations for COVID-19 vaccinations over the last two days, the district's health authorities reported on Saturday.

The district has released 8,124 registration opportunities since Thursday. A total of 7,239 had been booked by 10am on Saturday morning, said Ye Qiang, head of the district's health commission.

Among all reservations, more than 3,000 were made for this weekend.

"There are nearly 8,000 teenagers in this age group in our district," Ye said.

A total of 16 vaccination sites (including one temporary) are available in Jing'an District, all equipped with medical professionals of city- or district-level hospitals (two doctors, two nurses and one pediatrician), and one psychological consultation division.

Some 10 ambulances are on call during the inoculation period, and standing by in the areas within five-minute drive away from the vaccination sites, Ye added. 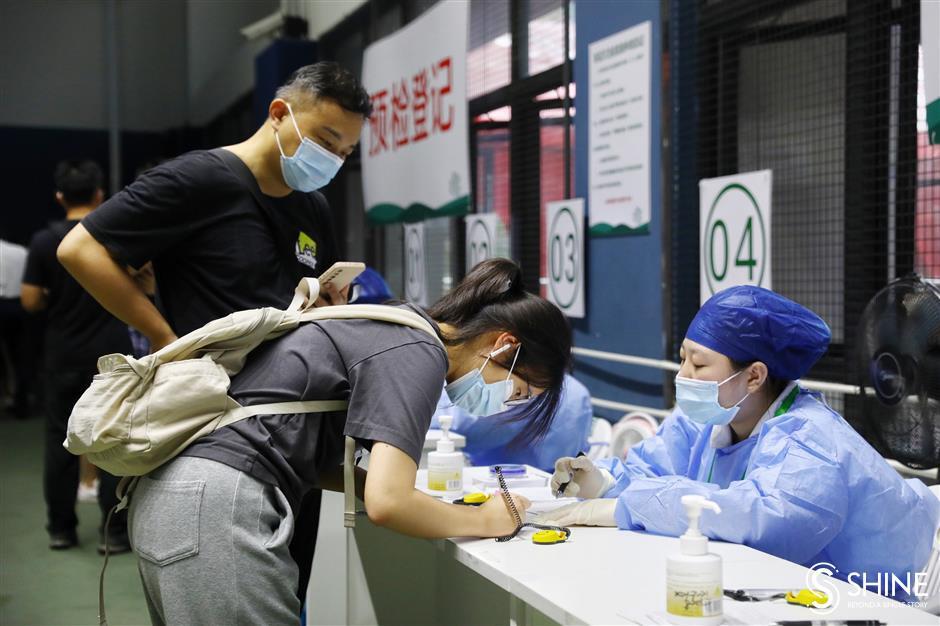 A girl completes an information form at the reception desk.

At Jing'an Sports Center, one of the vaccination sites in city, the inoculation started at 8:30am on Saturday morning.

The center has been divided into sections for registration, inoculation, observation and medical care.

Areas for the vaccination of minors are separated from those for adults. There are six reception desks and 15 inoculating rooms set for teens.

There was also a breakfast vehicle on site, in case teenagers had skipped breakfast, said Xia Fen, who is in charge of the vaccination site.

"We divide the vaccinating time into sections, half an hour per section," Xia said. "Parents can take their children to the sites according to their reservation time. In this way, no long-term waiting or lining up would happen."

She reminded parents or guardians to make reservations for children in advance, ensure children have had a meal, and prepare ID card, health code, travel history, and reservation information for both parents and teens.

She Wei, a medical staffer who serves at the reception desk: "We have fully prepared for the vaccination procedures whether outside or inside the center. The overall process is very smooth."

Medical workers who oversee the registration will carefully check the ID card, personal information, reservation code and inquire about health conditions of the vaccinating candidates as well as information about their parents or guardians.

"We will ask more carefully about the children's information, and sometimes double check the information of the children with their parents," said Wang Li, another medical staffer. 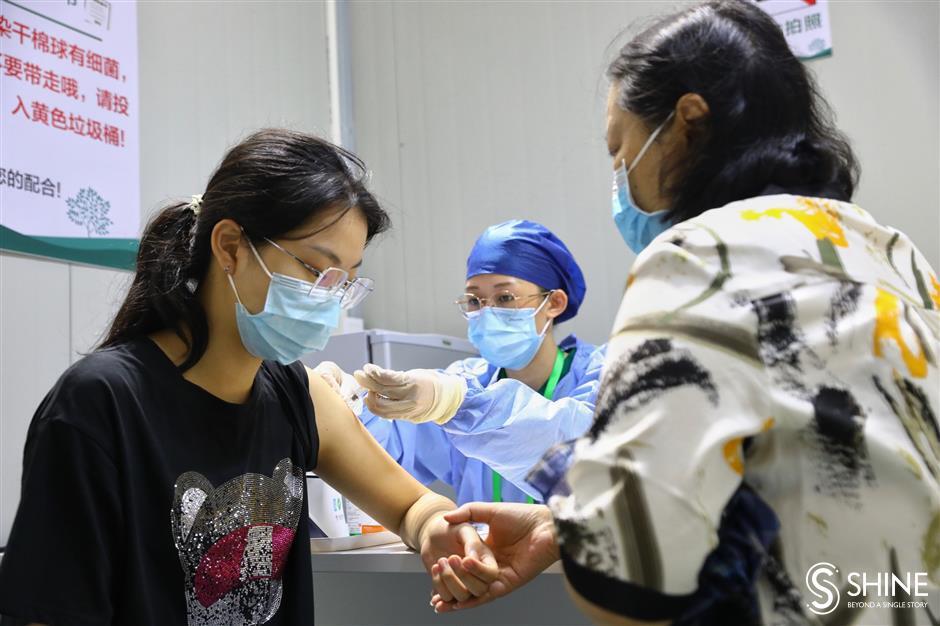 A teen is vaccinated, accompanied by her mother.

Some parents who have been vaccinated made appointments for their children upon learning that inoculaton is available for minors.

"I have been vaccinated, so I made a reservation for him (his son) as soon as possible," said a father named Jin Changlu. "He is also very positive for taking the vaccination."

Many parents believe that vaccines can help set up a protective barrier for their children during the outbreak of COVID-19.

"The epidemic situation is still serious, getting a vaccination can give assurance," said a mother, Wang Shujun, who came with her daughter. "The way of making an appointment is very convenient, I just booked it by using my smartphone."

There was also a freshman who was vaccinated at the sports center.

"I am just one month away from 18 years old," said the boy, surnamed Wu who was accompanied by his mother. "So, I rushed to have the vaccination today because most of my classmates have been inoculated."

Inoculation procedures for minors in Shanghai aged between 12 and 17 started from Saturday, said the city's health authorities.

The city opened reservation on Thursday for 15- to 17-year-old teenagers first.

Vaccination schedules for those aged from 12 to 14 will be announced later, as will arrangements for foreigners, residents from Hong Kong, Macau and Taiwan, as well as overseas Chinese.

Reservations must be made by parents and guardians. They can book vaccinations for teens online through the health cloud app and Shanghai's public service app Suishenban.

A child should be accompanied by a parent or a guardian. 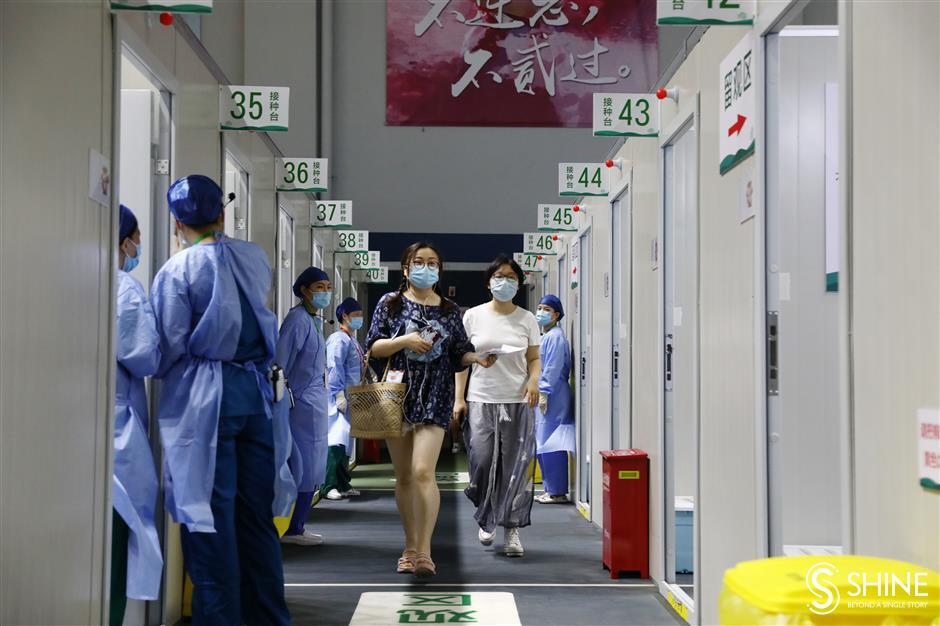 There are 15 inoculating rooms for minors at the Jing'an Sports Center.