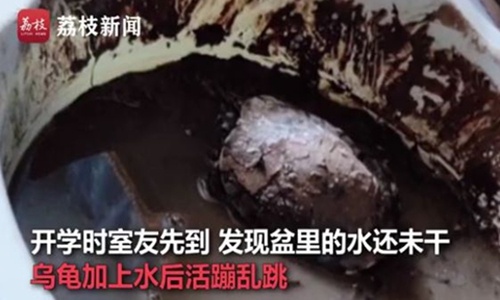 A pet Brazilian turtle is found alive after being left alone in a college dorm in Zhengzhou, Central China's Henan Province, for eight months when school was suspended. Photo: Sreenshot of a video posted by Lizhi Video

A pet Brazilian turtle was found alive after being left alone in a college dorm in Zhengzhou, Central China's Henan Province, for eight months when school was suspended, a surprise gift for its owner who said she had cried several times thinking it had died.

The owner, surnamed Li, shared her happiness on social media after finding out that the small animal, which had been with her for three years, actually survived the "vacation," even though the turtle's shell had already become soft.

Li said that she used to take the turtle home for winter vacation, but when winter started in 2020, it had gone into hibernation and buried itself in the soil so she had to leave it in the dorm before she left, yangtse.com reported on Wednesday.

Netizens also shared in Li's joy, vowing to learn from the "turtle spirit" when encountering difficulties.

"Stay strong like a turtle. When people don't believe you can do it, prove to them that you can," read one comment on Sina Weibo.