Tourists driving to Tibet leave waves of rubbish in their wake 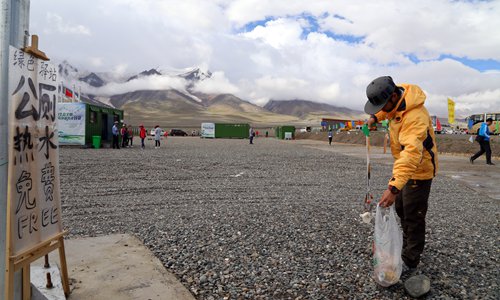 A volunteer picks rubbish along the highway leading to Tibet near a service center. (Photo: VCG)

Empty bottles, paper and plastic bags are scattered along the No.318 national highway, the "most beautiful" road ever built, leading to Lhasa, capital of the Tibet Autonomous Region.The sight appeared in a series of photos posted by Chinese netizens online. The piles of rubbish in the pictures make the side of the highway look like a garbage dump.The 2,000-kilometer highway connects Chengdu, Sichuan Province and Lhasa. It was once called "the most beautiful highway" because of the marvelous scenery along the way."It was extremely beautiful, but extremely dirty," 35-year-old Zhang Feng recalled. She and husband traveled along the road to Tibet in 2016.Dai Feng, who moved from Beijing to Lhasa in 2011, drove on the highway in the winter of 2015 and 2016. He confirmed the situation with Global Times."There was countless plastic waste and scraps of paper," Dai said. He showed a picture he took near the Kazila Mountain Viewing Point along the highway in Sichuan, where garbage is spread all over a small hillside.Dai and most netizens think tourists who litter on the way to Tibet should be fined.Dorje, the office director at the local tourism and culture bureau in Litang county in Garze County of Sichuan, the organization responsible for the management of the viewing point, told the Global Times on Friday that the bureau has arranged an inspector to stay at the viewing point and patrol along the highway every day.However, tourists "are littering more than workers have collected," Dorje said.During the peak tourist season in Tibet, from June to October, the viewing point is "so overcrowded that inspectors have to squeeze through the crowd to work," he said.Tourists who drop litter are not fined, but are "persuaded" to change their habits by inspectors, said Dorje.The bureau, according to Dorje, has constructed 10 service areas along the 150-kilometer section of the highway the bureau is responsible for, including 10 public bathrooms and 30 garbage cans. At least three inspectors work at each service station.Dorje noted that the situation is "actually turning better in recent years." Some staff working at the Tibet Tourism Bureau also told the Global Times things are improving. "Some pictures posted by netizens could have been taken years ago," a staff member at the bureau told the Global Times on Friday. He would not give his name.Tenzin, head of Guxiang township in Bomi County in Tibet, which is on the highway, told the Beijing Youth Daily on Thursday that to keep the highway clean, the local government sends out crews two to three times a week. Sometimes "a dump truck would be filled with rubbish every 20 or 30 kilometers," said Tenzin.Due to the report, the local tourism bureau of Nyingchi Prefecture in Tibet, where Bomi County is located, was cautious in releasing contacts of local government officials in places such as Guxiang to the Global Times. The bureau failed to give any response as of press time.Who should be blamed?There are multiple checkpoints along the highway once entering the Tibet region, where vehicles have to stop and be inspected, according to Zhang, who took part in an extensive tour of Tibet with her husband in 2016."Rubbish was everywhere, even at the checkpoints," Zhang said.Expressways have been built between Lhasa and Nyingchi, which could be the reason why the situation is better in that section, sources said.However, the highway still runs through villages with poor conditions, where even local people litter without a thought, Zhang said."You can hardly blame them for littering because they are so poor and hardly have enough food," Zhang said.The rubbish issue also exists within the Tibet region.Some tourists and local people throw hada, a piece of white silk used to show respect, into sacred lakes including the Namtso Lake, to show their devoutness, without knowing this is pollution, Zhang said. Plastic waste can also be found around the lake.While most people attribute the garbage to tourists, Niu Fengrui, a research fellow at the Institute for Urban and Environmental Studies with the Chinese Academy of Social Sciences, thinks government departments should take more responsibility.Relevant departments "should not pass the buck," Niu said.Multiple measures can be taken such as carrying out garbage disposal plans and designating sites for waste disposal. "There is no excuse for leaving the place filled with rubbish," Niu said.Education and warnings to tourists are essential, but governments should not rely on them, Niu said.The rubbish along the highway left Zhang with a deep impression. Speaking of the possible "better situation" suggested by local tourism department staff, Zhang said she doubts it. "The issue was too serious to be solved in just two years," she said.