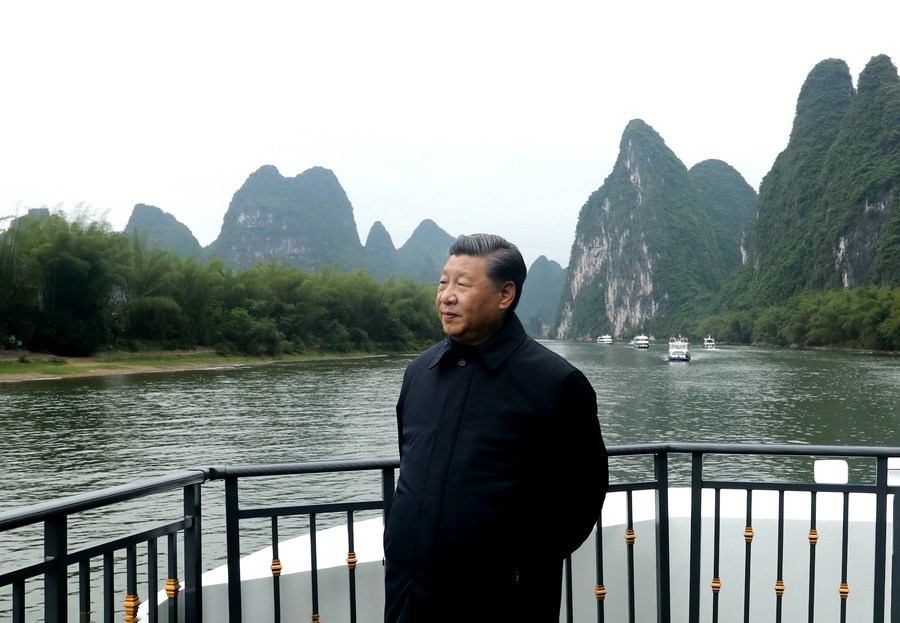 Chinese President Xi Jinping, also general secretary of the Communist Party of China Central Committee and chairman of the Central Military Commission, visits a section of the Lijiang River and learns about local efforts in the ecological conservation of the river in Yangshuo, south China's Guangxi Zhuang Autonomous Region, April 25, 2021. (Photo: Xinhua)

"We should protect nature and preserve the environment like we protect our eyes, and endeavor to foster a new relationship where people and nature can both prosper and live in harmony," said Chinese President Xi Jinping.

In 1985, when serving as Party chief of Zhengding County in north China's Hebei Province, Xi directed the formulation of the local economic and social development plan which included this remark: "(We) would rather not be affluent than allow pollutants." At the time, China's decades-long economic take-off had just started, and sustainable development was yet to become the go-to option for most countries.

As Xi gained more experience serving the country and the people, his hallmark green development speeches later included, "We want both GDP and green GDP," and what has become a maxim in China, "Lucid waters and lush mountains are invaluable assets."

"We owe so much to the ecological environment. If we don't do a solid green work from now on, we will pay a higher price in the future," said Xi during his first inspection trip out of Beijing in December 2012, less than a month after he was elected general secretary of the Communist Party of China (CPC) Central Committee.

Xi's ideas about ecological progress were nurtured and developed during his work in various posts from the county level to the national level, taking into account domestic and global issues, according to Yang Kaizhong, director of a research institute on Xi's thought concerning ecological progress under the Chinese Academy of Social Sciences (CASS).

"As the world's biggest ruling party, the CPC is exploring a development pattern that balances economic development and environmental protection, which may provide a model for other developing countries," he said.

Over the past five years, under the guidance of Xi's thought concerning ecological progress, China has made historic achievements in environmental development, said Minister of Ecology and Environment Huang Runqiu.

Between 2016 and 2020, China managed to significantly reduce its number of days with heavy air pollution, according to the ministry. The safety of drinking water was guaranteed. Black and odorous water bodies were generally eliminated in cities.

In 2018, China for the first time incorporated ecological advancement into its Constitution.

Zhang Yongsheng, director of the CASS institute of ecological civilization, said that China has completely abandoned the traditional development model of "pollution before treatment," and that ecological environment protection is becoming a new driving force for economic development.

As Xi once said, the development model of "killing the hens for eggs" and "draining the lake for fish" has reached a dead end. The future will be illuminated by eco-friendly development that is in accordance with the rules of nature.

China has taken the global lead in both the vision for and the practice of harmonious coexistence between people and nature, and has become a pathfinder for, contributor to and leader of better green development, said Zhang at a seminar on Xi Thought concerning ecological progress.

"China is the number one provider of environment technology in the world" and an important provider of solar energy, said Erik Solheim, former executive director of the UN Environment Programme, adding the country is also leading the world in areas such as electric vehicles, wind energy and hydrogen.

Xi pledged that China will strive to peak carbon dioxide emissions by 2030 and achieve carbon neutrality by 2060 -- a much shorter time span than many developed countries would spend.

China has taken the initiative to do that, instead of doing it passively, said Xi, adding that actions speak louder than words.

During the 2021-2025 period, the trading of carbon emissions, which has been piloted in seven provinces and cities and covers over 20 industries, is expected to see a wider range of participators, as more industries and trading entities will be encouraged to join the carbon market.

The country is also planning to put in place a special law on climate change as it accelerates its formulation of top-level design and industry-specific policies to further clarify its roadmap toward carbon neutrality.

The country is drawing up an action plan to peak carbon emissions by 2030 while working on specific plans for various industries and sectors including power, steel, petrochemicals and transportation, said Jin Xiandong, spokesperson for the National Development and Reform Commission.

China's commitment to reaching net-zero carbon no later than 2060 is one of its most important moves since the beginning of reform and opening-up in the late 1970s, said Asian Infrastructure Investment Bank President Jin Liqun.

"When China is committed to doing something, it will just do it," said the bank's chief at the International Finance Forum 2021 Spring Meetings in Beijing on May 29.