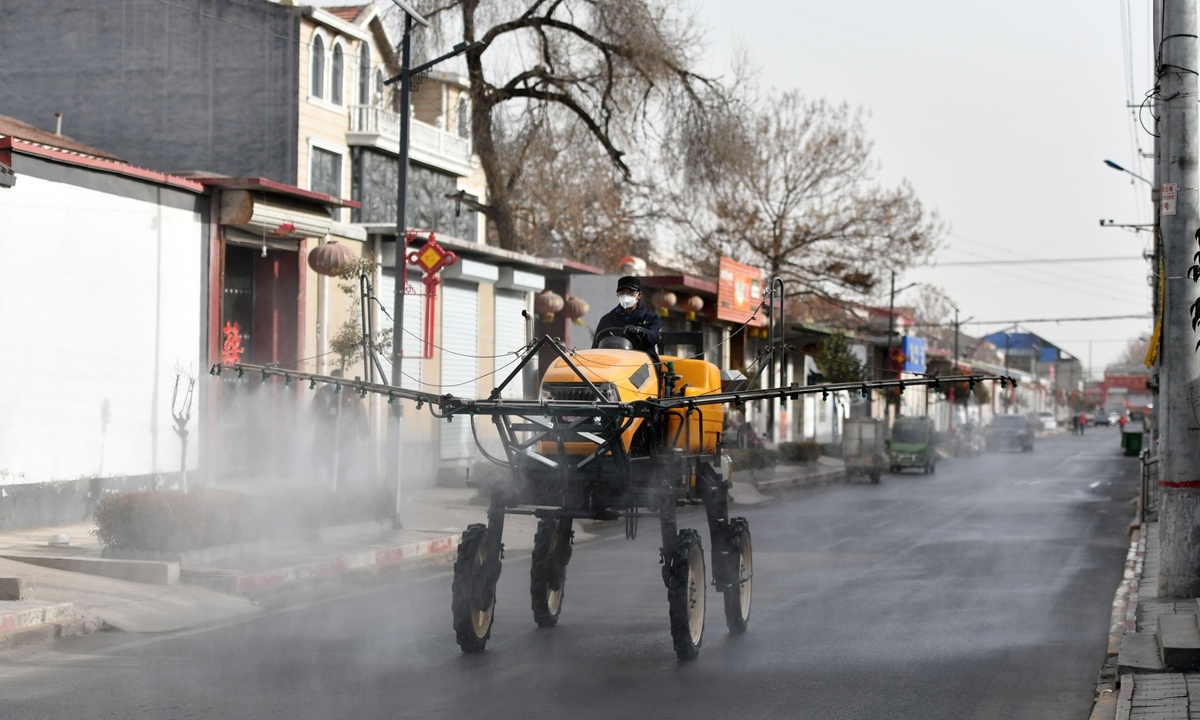 A health worker disinfects a street in a village in Shijiazhuang’s Gaocheng district, North China’s Hebei Province, which was hit by the fresh COVID-19 outbreak. (Photo: cnsphoto)

The work of tracing the origin for the latest outbreak in North China's Hebei Province is most difficult, China's CDC director Gao Fu was quoted as saying in a post published on the CDC's website as the province sees double-digit increases in new cases and major cities are under strict lockdown.

Gao made the comment during a seminar with the local police bureau of Shijiazhuang, Hebei's capital on Sunday. The participants discussed and exchanged views on the origin, variant and transmission route of the coronavirus, and agreed on their work in sourcing the outbreak's origin, the post said.

"The latest outbreak in Hebei was a local transmitted case, but the virus strain shows it might be imported. So far, the epidemiological survey has failed to find patient zero and the initial infection route remains unclear," Wang Peiyu, a deputy head of Peking University's School of Public Health, told the Global Times on Monday.

The coronavirus in Shijiazhuang and Xingtai of Hebei is similar to the strain from Russia, gene sequencing results show.

Compared with the sporadic outbreaks in Beijing, the situation is much more complicated in Hebei, Wang said.

Gao highly praised the public security authority's ideas on sourcing the origin of the cases, and CDC experts will continue to provide technical support to the local public security bureau.

Most of the patients are middle-aged and elderly people from villages in Hebei. The average age of confirmed cases in Hebei Province is 50 years old, and 30 percent of the cases are over 60. Shi Jian, an official from the Hebei provincial disease prevention and control center, revealed previously that the tracking of infection sources is ongoing, but preliminary estimates showed that the virus strain of the Hebei outbreak may have originated from overseas.