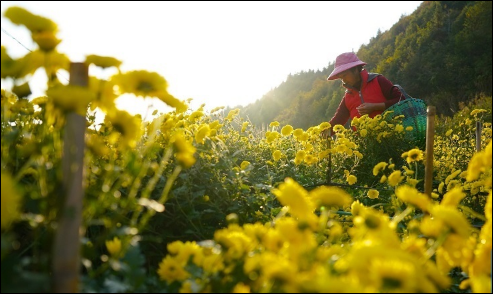 A farmer works in the chrysanthemum field in Sikou Town of Wuyuan County, East China's Jiangxi Province, Nov. 8, 2018. The local farmers are organized in recent years in a campaign to create a combination of trade company plus production coop plus farmer organism in order to streamline the marketing of chrysanthemum, a traditional Chinese medicine herb. (Photo: Xinhua)

He pointed out that traditional Chinese medicine helps promote sustainable agricultural by sparking the demand for organic and herbal products in many parts of the world, offering an interesting market for family farming.

"Over generations, they have developed many practices that help avoid the use of large quantities of pesticides and chemicals. Family farmers also recover and preserve traditional crops, safeguarding biodiversity and contributing to healthier and more balanced diets," Graziano da Silva said.

He added that achieving the FAO's Zero Hunger by 2030 Sustainable Development Goal is not just about feeding the hungry, but also about improving the quality of food itself.

This means tackling the current obesity pandemic resulting from the consumption of industrialized, processed foods that contain a lot of salt, sugar, and other harmful additives.

"More and more people are becoming obese. These numbers are approaching the number of hungry people in the world," the FAO chief told Xinhua in a recent interview. "We now have 672 million obese people (globally), and they are growing exponentially. This issue affects all countries -- developed and developing countries, poor and rich families."

Graziano da Silva, who designed and implemented a Zero Hunger program that lifted 28 million people out of poverty in 10 years in his native Brazil, said that "a regulated and expanded traditional Chinese medicine system will enhance the production, harvest and marketing of important plant species", offering the potential for knowledge sharing and South-South Cooperation (SSC).

SSC is a framework for collaboration among developing countries based on solidarity, and is playing a key role in tackling food insecurity and poverty while promoting sustainable agriculture in the southern part of the globe, according to the FAO.

"This Congress can certainly contribute to the development and fostering of traditional Chinese medicine to the benefit of more people in developing and developed countries," Graziano Da Silva said.