CHENGDU, June 9 (Xinhua) -- In the township of Tangchang, Lai Shufang carefully inspects the new cloth shoes she has made and cuts the extra trimmings protruding from the shoe edges. 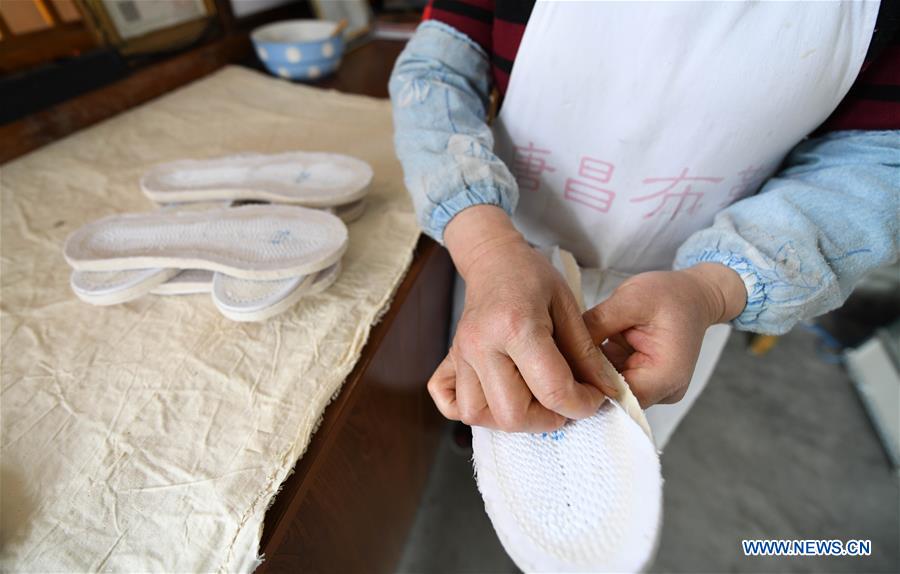 Lai, 62, is a cloth shoemaker in southwest China's Sichuan Province. Her family has been in the business for more than 80 years.

"My dad went into a famous shoe store in the township to learn about the craft in 1938, and then he became a technical trainer for a state-owned shoe factory," Lai said. "I also worked in the factory. After it closed in the 1990s, I started a home studio and continued the cloth shoe business."

The business of traditional cloth shoes went into hiatus in the 1980s, when sneakers broke into the Chinese market, edging the cloth shoes out of the market.

But cloth shoes are making a comeback these days, as nostalgia catches on amid increasing promotion of intangible cultural heritage by the government. 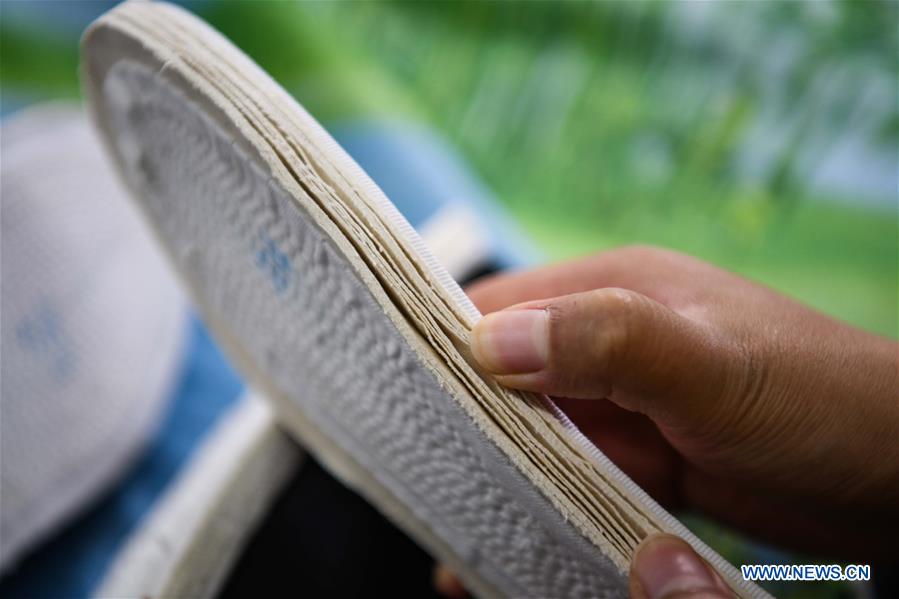 This Saturday, an online shopping festival featuring products related to intangible cultural heritage will kick off on major e-commerce platforms such as Taobao.com, JD.com and Suning.com, as well as on the popular short-video sharing platform Kuaishou. Lai's son Ai Peng, who has joined his mom in the business, said he has applied to participate in the event.

"JD.com has asked us to prepare 3,000 pairs, and said they would promote the shoes for free. Taobao.com wants us to prepare 8,000 pairs," Ai said. "The demand is just overwhelming, considering that we only made 10,000 pairs for the entire year last year."

Traditional cloth shoes in the township of Tangchang have more than 700 years of history. A pair of Tangchang cloth shoes needs to go through 32 procedures, featuring natural materials such as flour, cotton, cloth and wool. Craftsmen like Lai stew flour into a paste, and stick cloth layers together. The cloth layers are then dried as raw materials for shoe soles and uppers.

"Cloth shoes have more air permeability than those with plastic soles in the market," Lai said. "They are easy to walk in, and they don't get damp easily."

The cloth shoes enjoyed huge popularity among the Chinese public until the 1980s.

"In their heyday, there were five cloth shoe factories in Chengdu, the provincial capital, alone," she said. But after sneakers took over, their popularity gradually waned. The last of the factories, where Lai worked, filed for bankruptcy in 1998.

To sustain a living and help the cultural heritage survive, Lai and her coworkers continued making cloth shoes.

"It consumed a lot of time and effort, and the shoes didn't fetch good prices," Lai said.

Five years ago, Lai reached the age of retirement, and she made up her mind to close her store so that "life could be less difficult." To her surprise, her son Ai Peng quit his job and came back home to help Lai pass down the heritage.

Ai developed a deep passion for cloth shoes when he was just a child.

"When I was little, I would always play with the thread wheels in my mom's factory, like it was the golden cudgel of the Monkey King," he recalled. "I also developed a passion for traditional culture because my grandpa would always listen to traditional Sichuan opera and sip tea, which had quite an impact on me."

"I know that since 2014, the government has been paying increasing attention to the protection and promotion of intangible cultural heritage, and the number of people willing to buy cultural products is on the rise," Ai said.

Ai said that despite rise in prices for several times, their homemade cloth shoes are becoming increasingly popular.

In the village of Zhanqi, where Lai and her son live, local authorities have been promoting rural tourism by restoring village houses into their original styles. Tourists can buy local souvenirs such as cloth shoes, embroidery, bamboo products and specialties such as soy sauce.

Last year, the number of visitors reached one million in the village, and the revenue from rural tourism stood at about 10 million yuan (about 1.4 million U.S. dollars), according to village official Gao Demin.

"Traditional cultural heritage such as cloth shoemaking was once buried in the sea of industrialized products, but as people have begun to pursue a high-quality life, they have come to understand the value of traditional art," Gao said.