Heavy downpours that pounded Henan province and left at least 33 dead and eight missing drifted northward on Thursday, causing a trail of destruction in other cities.

As of 4 am on Thursday, torrential rain had affected about 3 million people in Henan province, and 376,000 had been relocated to safe places, according to the provincial emergency management department.

More than 215,200 hectares of crops were damaged, with a direct economic loss of about 1.22 billion yuan ($188.7 million), according to Xinhua News Agency.

The Henan provincial meteorological observatory activated the highest level of rainstorm alert at 11 am on Thursday because rainfall was expected to continue for the next few hours in a number of cities, including Anyang, Hebi, Xinxiang and Jiaozuo.

In Xinxiang, a city of 6 million north of Zhengzhou, local flood control authorities said on Thursday that they were combating the heaviest rainfall on record.

Between 8 am on Saturday and 6 am on Thursday, 907 millimeters of rain fell in Xinxiang. By early Thursday, the city's seven medium-sized reservoirs were overflowing. An estimated 470,000 residents had been affected, and more than 10,000 workers and 1,500 vehicles had been deployed for rescue efforts, according to the local government.

On Thursday, the meteorological bureau of neighboring Hebei province also issued a red alert－the highest in a four-tier alert system－for rainstorms. Many cities in the province have been hit by heavy rain for more than three days, and Handan, Xingtai and the provincial capital of Shijiazhuang were expected to have continuous downpours through Friday.

At least two villagers were reported dead in Hebei after a tornado struck a village in Baoding at around 5 pm on Wednesday and brought several factories nearby to a standstill.

Another red alert for geological disasters was issued on Thursday in Hebei, warning of the risk of building collapses, landslides and debris flows in cities.

Li Fen, 38, who lives in a village in Pingshan county in Shijiazhuang, had to return home early on Thursday after rain hampered several attempts to go to work. "The roads were either blocked by mudslides or closed by traffic workers for safety concerns," he said.

Li lives close to a hill covered with solar panels. "Standing in my yard, I could see that the panels, which are usually lined up, were in serious disarray due to the rain and wind," he said.

Although cities north of Zhengzhou were experiencing heavy rainfall on Thursday, authorities in Zhengzhou downgraded the city's emergency response for flooding from the highest to the second-lowest level in a four-tier warning system.

Floodwaters that had inundated the city's subway system and areas of downtown on Tuesday have receded in many districts, allowing repair and continued rescue efforts as well as a return to some degree of normalcy.

Qian Xin, who works for a real estate developer in Zhengzhou, said traffic had resumed on streets in downtown areas on Thursday, though streets were largely jammed with vehicles because of some collapsed roads.

Qian had been stranded in an office building since Tuesday afternoon when the rain became so heavy that buses halted service.

Widespread electrical outages followed the next day, but power had largely been restored by Thursday.

"Some of my colleagues have resumed business travel after flights became available," he said.

The city's transportation authorities said 90 percent of bus services would be restored by Friday. They were still assessing the ability of the suspended subway system to resume operations.

Shi Baoyin and Xinhua contributed to this story. 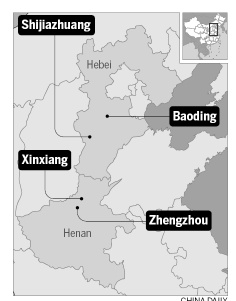