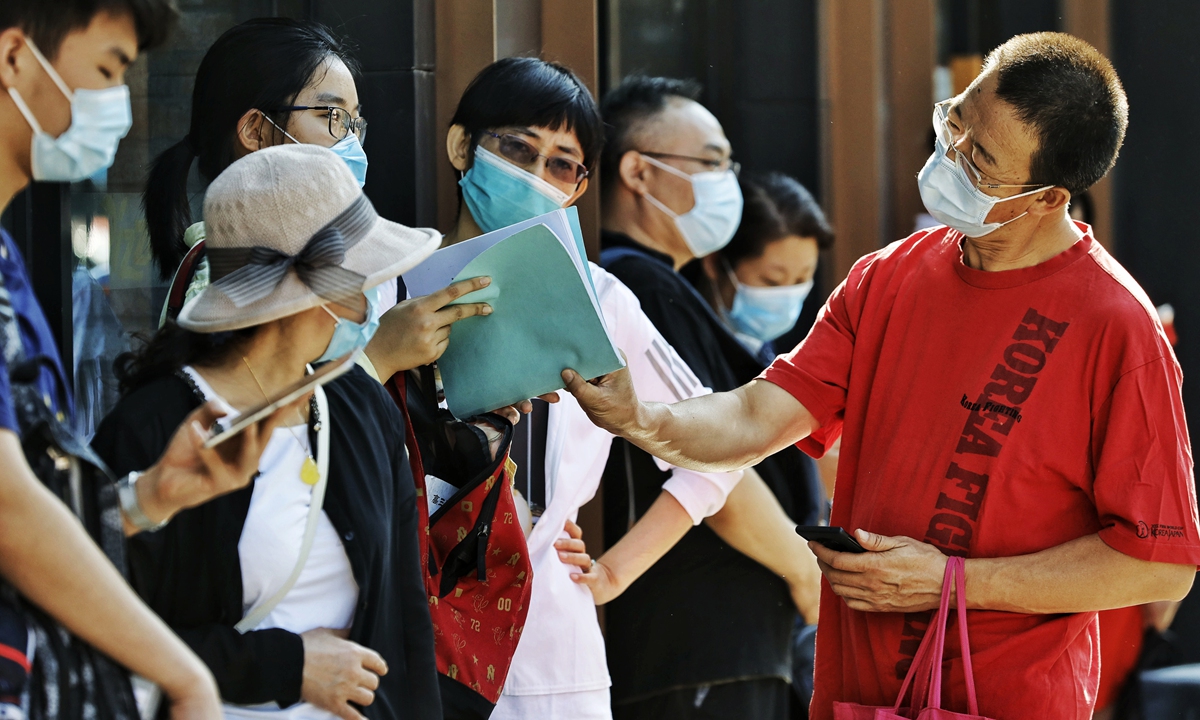 Parents tutor students before the test at the gate of the Affiliated High School of Peking University in Beijing on Tuesday. Photo: Li Hao/GT

The two institutions engaged in daycare services during the summer vacation, organized training in academic subjects, including pinyin spelling, writing, mathematics and calculation, and English for pre-school children, which violated related policies and regulations, according to a notice issued by the city's special workgroup on "double reduction."

The two institutions were ordered to suspend the operations and refund the tuition fees. Relevant files and evidence of their illegal operations will be transferred to law enforcement departments for further investigation and punishment, the notice said.

The cases come amid a nationwide campaign led by the Ministry of Education, which runs from July 20 to August 30 and aims to strengthen the implementation of the "double reduction" policy, an educational reform measure that refers to a reduction in homework and the time spent in extra-curricular classes or after-school private tutoring, which was rolled out by the country's education authority last July.

A slew of cities across the nation, including Beijing, have launched and strengthened inspection and law enforcement to crack down on violations of academic subject training in all their forms, with many institutions' violations against the policy made public and punished.

Over the past year, the disorderly expansion of off-campus training institutions has been effectively curbed, the heavy burden on students has been effectively alleviated during the compulsory education period, and more parents have been paying greater attention to family education, though improvements still needed in some areas, experts said.

One of the major targets of "double reduction" is the reduction of the academic burden on students, which does not mean making students not value their academic development, Xiong Bingqi, director of the 21st Century Education Research Institute, told the Global Times on Sunday.

As a result, schools have to improve their education quality and efficiency by educating students on how to study as opposed to simply telling them what to learn, stimulating students' interest in learning and cultivating students' self-motivated learning ability, Xiong said.

Recent research on "double reduction" conducted by three scholars from Renmin University of China shows that symptoms of depression among adolescents were drastically reduced by 78.6 percent due to the reduced burden over the past year, whereas parents' anxiety symptoms increased by 12.8 percent. This is because the balance between family and work becomes harder to achieve as more and more parents turn to home schooling.

Xiong pointed out that with the return of family education, the concept of scientific and rational parenting has to be enhanced among parents to reduce their anxiety.

Parents' concepts are crucial to promoting "double reduction," Xiong said, noting that parents' anxiety needs to be relieved through reforms in the education evaluation system as well as through directions on family education for parents and establishment of new home-school co-education methods.

In terms of the functions of social educational institutions, Xiong pointed out that these institutions should get rid of the training mode and give full play to the role of community resources to increase meaningful activity options for students.