Training pays off for livestreaming hosts 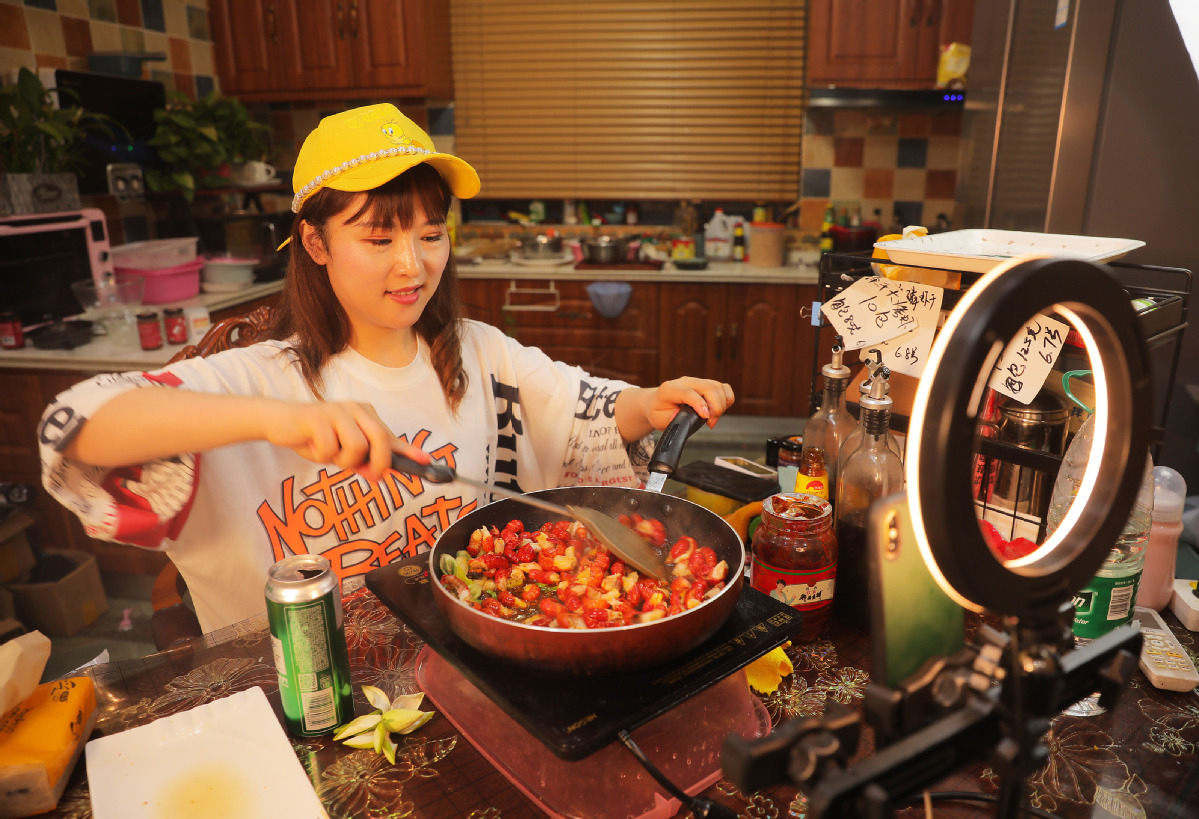 Just after midday in the middle of last month, Gao Xizhi was busy making dumplings with a mixture of shrimp-and-pork fillings.

After she finished making three trayfuls of the savory delights, the 67-year-old wiped away sweat, cleared her throat, looked into a camera and asked, "Wouldn't you like to taste one right now?"

The presentation on the Taobao Live platform was watched by thousands of viewers on their phones.

Gao, who trained to host livestream broadcasts, said,"I usually make dumplings for fun, but when you're filming yourself live, a number of techniques come into play, such as what to say and when to say it."

She hosts her broadcasts at the Shanghai Sheshan Internet Celebrity Training Base, which in June began recruiting candidates seeking livestreaming careers.

Occupying a 26,680-square-meter site in the city's Songjiang district, it has training classrooms, themed livestreaming studios and an auditorium the size of a basketball court. Flashing lights and disco music are used to teach candidates how to conduct themselves in a relaxed manner.

Cao Yu, head of the company that set up the training base, said the decision to nurture online influencers was made as livestreaming took off across platforms earlier this year, when people were ordered to stay home during lockdowns imposed to contain COVID-19.

"Chinese shoppers have long used their phones to buy almost everything they need, and many retailers are struggling to stay afloat during the pandemic. There's clearly demand from both sides, and we just need to create a bit of catalyst. That's where Key Opinion Leaders, or KOLs, come in," Cao said.

Despite an uncertain start, livestreaming has rapidly become a mainstream activity in China. It basically involves people with the ability to influence potential buyers of products or services by recommending that they purchase them through social media or by phone.

During the coronavirus pandemic, livestreaming has accelerated, showcasing online retail to attract millions of people confined at home. Sales made on the internet have played a key role in reviving the sluggish sector.

Transactions made through livestreaming broadcasts accounted for 4.5 percent of the country's $2 trillion e-commerce market last year, but doubled in volume from the previous year, attracting advertisers.

A survey by marketing companies AdMaster and TopMarketing found that more than 66 percent of advertisers said they preferred to conduct sales through internet celebrities and online influencers.

Pei Pei, an analyst at Sinolink Securities who has followed the emerging sector since last year, said: "Key Opinion Leaders are definitely fueling retail growth, and are particularly noticeable when a similar type of merchandise is involved. They need both professionalism and a fun personality."

More people are making a living from livestreaming as it takes center stage.

Last month, the Ministry of Human Resources and Social Security added nine new professions, including "livestreaming sales personnel", to the official occupation list recognized by the government. Cities are looking to the burgeoning trade to stimulate their economies.

Shanghai has granted permanent residency to Li Jiaqi, an online host known as "the country's best lipstick seller". On June 29, authorities in the city's Chongming district published a directive identifying Li as a special talent, entitling him to faster approval for hukou, or household registration.

With the decades-long residential permit system nationwide set to be loosened, hukou in large cities such as Beijing and Shanghai is still prized, as it is considered a passport to better social welfare services.

Hangzhou, a city with a strong e-commerce presence, and also the capital of Zhejiang province, plans to nurture 1,000 influential online hosts and a batch of provincial-level livestreaming bases and public livestreaming studios over the next three years.

Other cities have rolled out livestreaming policies and training establishments, looking to attract and incubate talent to quickly turn clicks into cash.

Hu Jing, associate professor at the School of Economics and Management at Tongji University in Shanghai, said: "From personnel and policy, to technology and capital, provinces and municipalities have given all-around support to the development of the so-called livestreaming economy. It shows just how much livestreaming is boosting the economy and commerce, not just online but offline as well."