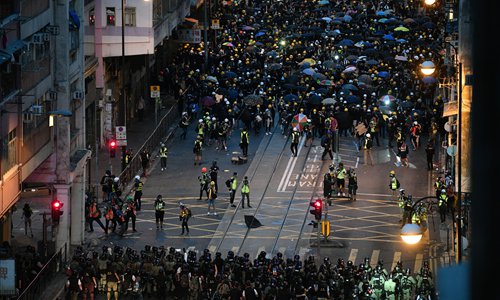 Protesters face off with police (bottom) during a demonstration against an extradition bill in Hong Kong on July 29, 2019. (Photo: AFP)

Protest against the Hong Kong extradition bill has been used by the opposition to create a violent movement, evident in a series of violent attacks against the Legislative Council, national emblem and innocent civilians, bringing chaos and disruption to Hong Kong's public order and affecting its economy.

It is obvious that what the opposition to the extradition bill opposes is not a simple amendment, but the rule of law in Hong Kong. It seeks to challenge the central government and make Hong Kong "independent."

As demonstrations by extremist forces in Hong Kong grow increasingly violent, the intervention of foreign forces has become more apparent. However, such intervention cannot grow in Hong Kong society without the cooperation and assistance of a group of traitors. Jimmy Lai Chee-ying and Martin Lee Chu-ming are representatives of this group of traitors.

From last year to this year, these so-called democratic leaders have had unprecedented levels of contacts with the US government and Western parliaments, forming increasingly brazen collusion that has fueled the expansion of street politics in Hong Kong.

Since past centuries, traitors have always played a special role in the conflict between China and foreign powers. In addition to directly serving external forces that invade and suppress China, their role usually includes destroying the internal solidarity of the Chinese people and helping external forces brainwash the Chinese people. Jimmy Lai Chee-ying and Martin Lee Chu-ming are typical examples of modern traitors.

In March and May, major representatives of the Hong Kong rebellion, including Anson Chan Fang On-sang and Martin Lee Chu-ming, both of whom received donations from Jimmy Lai Chee-ying, led the Civic Party in Hong Kong to meet with US Secretary of State Michael Pompeo and US Vice President Mike Pence, starting an international war of public opinion against the extradition bill.

In a provocative move by the Apple Daily, a Hong Kong-based newspaper founded in 1995 by Jimmy Lai Chee Ying, a leaflet that could be used as a protest sign for rioters in the field was published in the paper.

Hong Kong is fighting for the US, according to a US media report published within a week after Lai's meeting with senior US officials.

"Lai did not elaborate what kind of support US officials have committed, instead, he said that the US officials well understand Hong Kong is fighting for the US in the new cold war," said Voice of America on July 12 in its Chinese version.

"Mike Pence and Michael Pompeo met Hong Kong media tycoon Jimmy Lai Chee-ying, in some way that is a symbol that the US' strategy in Hong Kong has succeeded, Lai was there to claim an award from the US," Chan Man-hung, director of the One Belt One Road Research Institute at the Chu Hai College of Higher Education in Hong Kong, was quoted as saying in an interview with Hong Kong-based media outlet takungpao.com on July 24.

Chan said that the US has been proactively intervening in protests against an extradition bill that would allow criminal suspects to be extradited to the Chinese mainland, Macao, and the island of Taiwan and that Lai was overseeing implementation of the protests.

Taking a close look at the protests and aftermath in Hong Kong, people will notice all approaches match a typical color revolution such as gaining sponsorship from the US, fostering leaders, establishing political parties and organizations aimed at subverting the government, brainwashing Hong Kong society with extreme "Western values," leveraging emergencies to carry out street-level political activities, leveraging media to create fake news, forging so-called public opinion and coercing the government, Chan pointed out.

A color revolution is planned after long-term preparation, and it takes a while to make sure it can be used to deal with China, Chan said in another interview with takungpao.com on July 6.

Now with trade tensions have increased between the US and China, it is obvious that the US regards China as its No.1 enemy. Therefore, the US has launched a comprehensive attack on Hong Kong at both the international level and the internal level, Chan pointed out.

Besides local people in Hong Kong initiating protests, foreign consulates have participated with the cooperation of foreign media, Chan said.

Chan also confirmed that the US has accumulated forces by training a group of people who are directly engaged in demonstrations.

Since the Occupy Central Movement in 2014, batches of people have received training in the US and local media staffs have undergone dedicated training by the US in Southeast Asia.

Since then, some young people have played a major role, and the US is leveraging large-scale social demonstrations as a cover to promote a color revolution, he said.

The best way out for Hong Kong is offense rather than retreat, Chan stressed.

It is an open secret in Hong Kong that the forces protesting the extradition bill have been sponsored by the US. The activist, also the founder of the Next Digital Group, Jimmy Lai Chee-ying, was exposed by WikiLeaks to be closely related to US intelligence personnel, according to Hong Kong-based newspaper Wen Wei Po.

In mid-2014, an email related to Next Digital Group executives was leaked that indicated that the group has been communicating with the US Consulate General in Hong Kong.

During protests against the extradition bill, Lai had a high-level meeting with senior US officials including Mike Pence, Michael Pompeo, and US National Security Adviser John Bolton.

At the end of May 2014, Lai met with Paul Wolfowitz, the former US deputy secretary of defense, on a yacht for five hours, according to a report from Hong Kong-based Chinese language magazine East Week on June 19, 2014.

Wolfowitz, Lai's buddy, is a foreign policy hawk. In 1982, he was appointed as assistant secretary of state for East Asian and Pacific Affairs. Meanwhile, he was one of the prominent neoconservatives in the George W. Bush administration.

According to a May 2018 report from globalresearch.ca, a Montreal-based website featuring a media group of writers, journalists, and activists, Wolfowitz was responsible for developing the US' Defense Planning Guidance, 1994-1999. It was blunt and later described by US Senator Ted Kennedy as imperialist.

In part, the unedited Wolfowitz Doctrine declared, "Our first objective is to prevent the re-emergence of a new rival, either on the territory of the former Soviet Union or elsewhere… to prevent any hostile power from dominating a region whose resources would, under consolidated control, be sufficient to generate global power," according to globalresearch.ca.

Lai said during his own online show that he and Wolfowitz had known each other for a long time.

Lai and Wolfowitz were already friends when the latter became head of the US-Taiwan Business Council in 2008, Mark Simon, a senior executive at Next Media Group, confirmed, according to Hong Kong-based English newspaper South China Morning Post report in June 2014.

In Lai's chart of "political investments," Simon is his right-hand man.

Simon's father worked in a US government department. Simon served in the US Navy and was focused on intelligence assignments after he graduated from Georgetown University, one of the top schools in diplomacy, reported East Week.

Ellen Bork was one of Lee's assistants from 1998 to 1999. She was also reportedly connected to Jesse Helms, the then chairman of the US Senate Foreign Relations Committee. Later she served as deputy director of the Project for the New American Century at Freedom House, a US-based government-funded NGO that conducts research and advocacy on democracy, political freedom and human rights. Now Bork is a senior fellow at the Foreign Policy Initiative, a Washington-based think tank.

Financer behind the opposition

Jimmy Lai Chee-ying, 71, was born in South China's Guangdong Province. He was smuggled from the Chinese mainland to Hong Kong in 1960.

In 1981, Lai founded the Giordano fashion chain. By the end of the 1980s, he produced 200,000 T-shirts with a radical slogan on it for the so-called democracy movements, and he took this opportunity to get to know Democratic Party founder Martin Lee Chu-ming.

In 1990, Lai sold all his shares in Giordano at a low price and established the Next Digital Group in Hong Kong.

In October 2011, records of Lai's sponsorship to Hong Kong's pan-democrats and religious figures were leaked. The records indicated that from 2006 to 2010, he donated more than HK$10 million ($1.28 million) to the Democratic Party in Hong Kong and the Citizens Party, respectively, plus HK$20 million to former Hong Kong Cardinal Joseph Zen Ze-kiun.

In 2009, Lai's donation accounted for 99 percent of non-member donations to the Democratic Party and 68.2 percent to the Citizens Party. Lai's role as the main sponsor thus emerged.

Some commentators believe that his aim was to manipulate Hong Kong politics behind the scenes.