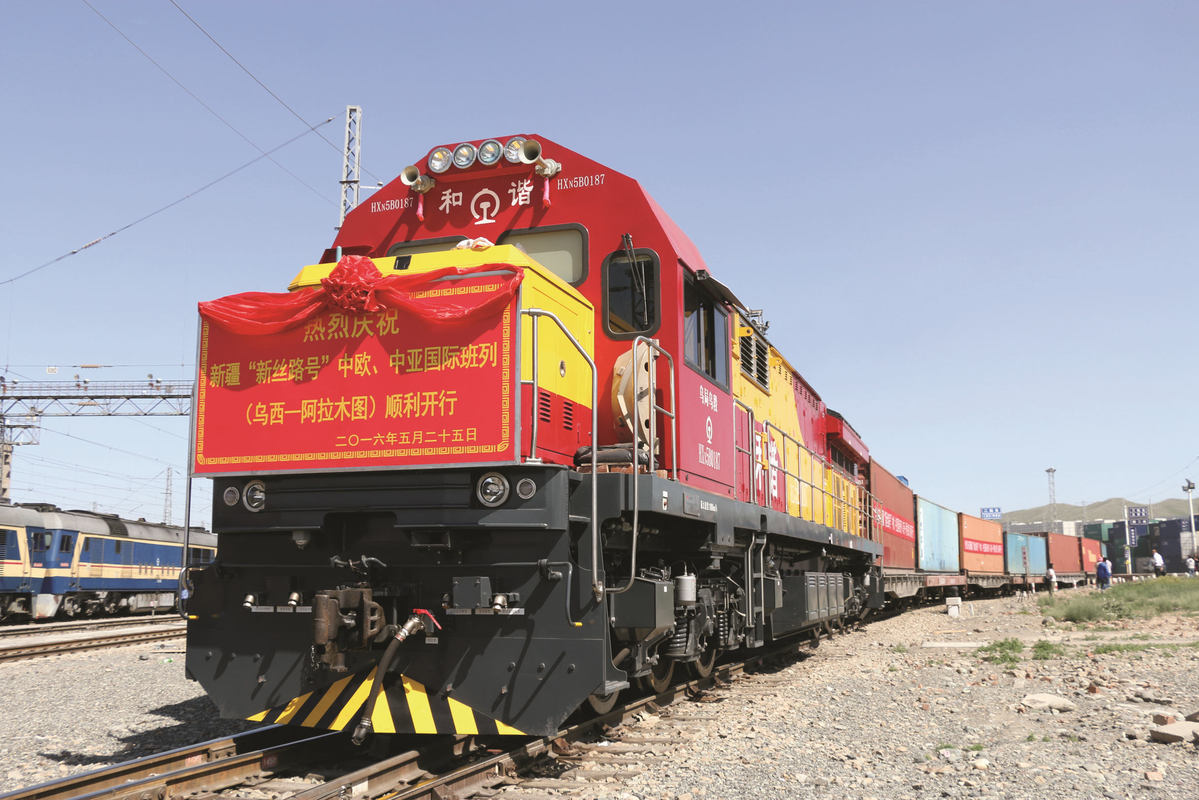 In 2013, train driver Xie Heng started working on the route of the China-Europe Railway Express, departing from the Xinjiang Uygur autonomous region.

In those days, the freight service, which aims to boost connectivity along the Silk Road Economic Belt via the Eurasian Land Bridge, could only take him to countries that border Xinjiang, such as Kazakhstan.

In 2013, the Belt and Road Initiative was proposed by President Xi Jinping as a way to boost global trade and connectivity. The BRI consists of the land-based Silk Road Economic Belt and the oceangoing 21st Century Maritime Silk Road.

Since then, the development of land ports and the transportation infrastructure in the vast region that covers one-sixth of China's territory has reached an unprecedented pace.

Xie believes that the changes he has witnessed in the China-Europe Railway Express services across the region perfectly demonstrate the effect of the BRI.

"I've driven trains carrying goods from China to Italy, Germany and Spain from Alataw Pass, which borders Kazakhstan. Nowhere tells the BRI's story better in practice than Xinjiang," he said.

Despite the ongoing COVID-19 outbreak, 2,446 China-Europe Railway Express trains traversed the pass in the first five months of the year, a rise of 44.7 percent from the same period last year.

He noted that China-Europe Railway Express services can cut freight journey times from Xinjiang to Europe by 80 percent compared with sea transportation and the service is extremely reliable.

The first China-Europe Railway Express train departed Alataw Pass on March 19, 2011. However, it took more than seven years for the number of services to and from China via the pass to reach 5,000, Wang said.

"But it only took 15 months for the number to reach 10,000 from 5,000. So, it's clear that the initiative has taken effect. Furthermore, the region has greatly benefited from it."

Xinjiang, an important trade hub on the ancient Silk Road, has been designated as a core area of the Silk Road Economic Belt under the 14th Five-Year Plan (2021-25) for National Economic and Social Development and the Long-Range Objectives Through the Year 2035.

Bordering eight countries, the region has geared up to leverage its geographical advantages and develop into a hub for greater trade openings.

Once, the juice had to be shipped to Urumqi, Xinjiang's capital, before it could be transferred to the China-Europe Railway Express, and it took 23 days to reach its destination, said Li Judong, manager of Hengtong Juice in Aksu, a key apple cultivation area.

"As Xinjiang's railway system improves, the freight train service has become more and more flexible. By departing from Aksu directly, the journey time to Russia has been cut in half, which has made the company's business more competitive. Xinjiang is no longer 'somewhere far away', but a transportation hub connecting China with countries in Central Asia and Europe. I am pleased to see that many of my international business partners realize that, too," Li said.

The BRI has also brought many new opportunities for land ports that have been key to traders since the ancient Silk Road. Modern cities have risen up at ports such as Alataw Pass and Horgos to better support the initiative's development.

In 1988, when Yu Chengzhong first arrived in Horgos, a land port between China and Kazakhstan in Ili Kazak autonomous prefecture, he never imagined that a new city with modern buildings would rise up in the Gobi Desert thanks to the BRI.

In Mongolian, Horgos means "a place where caravans pass", as it was a trading post along the northern route of the ancient Silk Road. In the Kazak language, Horgos is "a place where wealth can be accumulated". That resonates with its recent development as it becomes a regional hub for trade and commerce.

"Apart from a few one-story buildings and small shops, there was nothing but the Gobi Desert in Horgos, which was only a land port where no one wanted to stay permanently because of the harsh environment," Yu recalled.

"Horgos is no longer just a land port. Now, many people have settled down and become residents of Horgos city."

The entrepreneur has witnessed the rapid development of Horgos, especially since the State Council, China's Cabinet, decided to transform it from a simple land port into a city to better accommodate its development under the BRI and benefit Xinjiang's economic development.

Yu who started out by selling fruit on the streets of Horgos, is known as the local "fruit king". His company, Jinyi International Trade, exports fruit to Russia and countries in Central Asia. He has also established several fruit production bases around China to meet the demand of the international market.

He recalled that when he started the company, it took at least two days for customs to clear goods heading to Kazakhstan on trucks.

"Now, it only takes two hours, thanks to the improved customs clearance and simplified procedures brought by the initiative. Time means money in the fruit business," he said.

To make life more convenient, Xinjiang has stepped up efforts to cut customs clearance times at international rail ports, including Horgos. The average time for clearing outbound goods has been cut to less than one hour, while it takes less than a day to clear inbound goods.

The Horgos government said it will continue to improve infrastructures such as road and telecommunications that are important for businesses, because its goal is to encourage more large businesses to settle in the city.

Despite being one of the youngest settlements along the new Silk Road, the development of Horgos is driven by creativity. The city's International Cooperation Center, which straddles the China-Kazakhstan border, is the world's only cross-border free trade zone. Movement of personnel, vehicles and goods within the zone is unrestricted, and stores and visitors pay little or no tax.

In a written interview with China Daily this month, Chen Quanguo, Party secretary of Xinjiang, said the Horgos Economic Development Zone is expected to become a key engine in Northwest China to further boost Xinjiang's opening up as the region plans to accelerate the speed at which it becomes a core area on the Silk Road Economic Belt.

According to the regional government's work report, published in January, Xinjiang will attach great importance to building an international land port zone in Urumqi, along with economic development zones in Horgos and the southern city of Kashgar, a key settlement on the China-Pakistan Economic Corridor.

In addition to becoming a transportation hub and trade center, Xinjiang aims to become a focus for financial services, culture and technology, and medical services along the Silk Road Economic Belt.

Connectivity is so crucial for Xinjiang's development and key to making it a key corridor on the Silk Road Economic Belt that both the regional and central governments have continuously invested heavily to improve the transportation infrastructure.

Xinjiang is now connected to neighboring countries by 118 highways, the highest number among all China's provinces and regions. By 2019, all the region's prefectures and cities had been connected by highways.

On May 20, construction of the last section of the Beijing-Xinjiang Expressway in the region was completed, making it the second highway to connect Xinjiang with other parts of China, following the Lianyungang-Horgos Expressway that runs to Jiangsu province.

The Beijing-Xinjiang Expressway stretches more than 2,768 kilometers, passing through Beijing, the Inner Mongolia autonomous region and the provinces of Hebei, Shanxi and Gansu before reaching Urumqi.

Furthermore, 15 civil airports will be completed or under construction in Xinjiang within five years, Zhang Jun, chairman of the Xinjiang Airport Group, said in February.

The number of civil airports in Xinjiang has risen to 22 in the past five years, but the 14th Five-Year Plan will see the total rise to 37, the highest number among all China's provinces and regions.

Xinjiang will gain many advantages by integrating the development of countries along the Silk Road Economic Belt and other parts of China once the transportation infrastructure and supporting policies are in place, said Liu Yilei, head of the Research Institute for Economic Development and Reform in Western China at Xinjiang University.

"By taking part in the development of the Silk Road Economic Belt and other parts of China, Xinjiang will be able to explore new opportunities to achieve high-quality development, which is important for maintaining lasting stability in the region," Liu said.