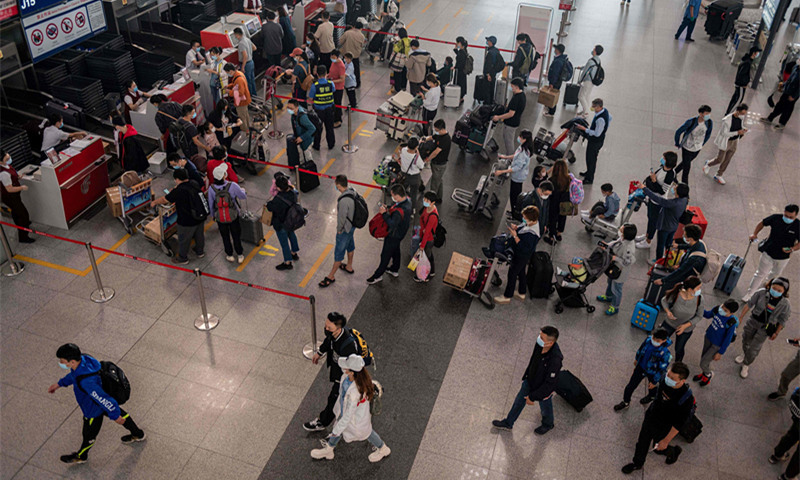 Passengers wait to check their luggage at Beijing Capital International Airport during the National Day holidays in October, 2020. (Photo: VCG)

A number of Chinese travel platforms, including Trip.com, Tongcheng-Elong and Qunar.com recently announced financial results showing higher booking numbers than 2019, several platforms even recorded their first quarterly profit since the beginning of the COVID-19 outbreak.

Among these 9.34 million users captured, nearly 30 percent booked flights at least twice in 2020. First-tier and new first-tier cities including Beijing, Shanghai, Chengdu in Southwest China's Sichuan Province, Guangzhou and Shenzhen in South China's Guangdong Province, were major flight destinations. The farthest flight booked was from Kashi in Northwest Xinjiang to Guangzhou via Urumqi, nearly crossing half the country. The lowest price snapped-up was 438 yuan ($66.80), a 90 percent discount on the full economy price, according to Qunar.

The tourism industry was hit hard by the epidemic, with public and business travel dropping sharply. But statistics show that the industry has not only recovered, but also found new room for growth. Tourists from third-tier and fourth-tier cities in China were the main drivers of new bookings across multiple platforms.

Third - and fourth-tier cities and below typically have no airports or high-speed rail connection. But China's online travel agencies' (OTA) expanding services to small cities have made travel easier in less developed regions.

According to the financial report, OTA Tongcheng-Elong's monthly active users in September rose to 246 million, recording year-on-year growth of 5.0 percent and a month-on-month growth of 40 percent, setting a record high and banking profits in the first three quarters of 2020.

As of September 30, its registered users living in non-first-tier cities accounted for about 86.1 percent of its total registered users. In the third quarter, about 67.2 percent of Tongcheng-Elong's new users paid for booking through WeChat came from third-tier cities, up from 63.3 percent in the same period in 2019.

Data released in Trip.com's financial report, one of the biggest OTAs in China, showed that the increase of new customers was the same as last year, among which new customers under the age of 25 accounting for 40 percent of growth, with nearly half coming from smaller cities.

Chen Gang, CEO of Qunar.com said that although the industry is facing unprecedented challenges, the platform will still achieve profitability in 2020, with transaction numbers among new users driving growth, of these, users in third-tier cities or below made up nearly half of new bookings.

Tourists travel demand, which had been dampened for most of the year, was finally unleashed in October. Qunar.com data shows that the number of bookings for holiday packages in 15 provinces and municipalities nationwide during the National Day holidays exceeded that of last year.

"Given current rate of recovery, we will be profitable by the end of December," he added.

While the COVID-19 pandemic has disrupted activities in some industries, others have benefited from new consumption patterns and new sources of demand born amid epidemic.

"The service sector has been the most affected industries by the epidemic. The recovery of the domestic service sector continues to accelerate, which is mainly due to the timely and effective control of the epidemic in China. The willingness of consumers to go out and spend money has increased with consumption demand and patterns emerging during and after the epidemic," Zhou Maohua, an analyst at the Everbright Bank, told the Global Times on Thursday.