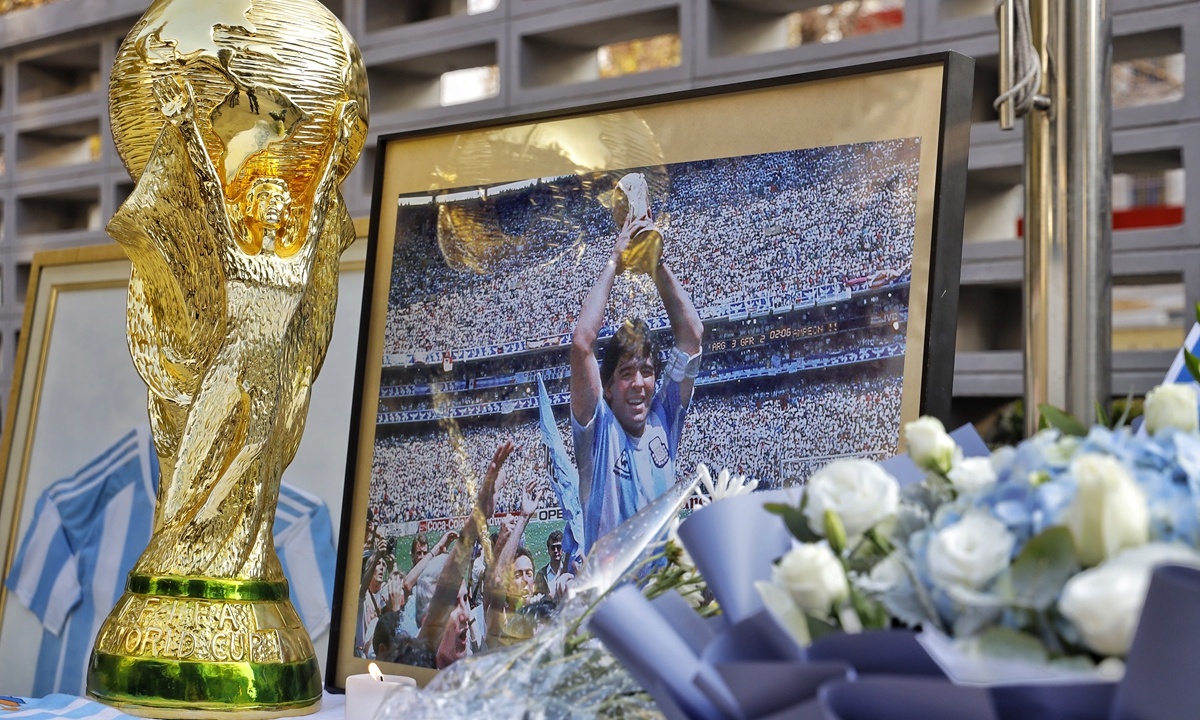 The curtain has finally fallen on the life of Argentine football legend Diego Maradona, one of the game's greatest players, leaving fans all over the world in tremendous grief, and casting a shade of sorrow onto the blue and white jersey of the national team he used to don. He will continue run forever in everyone's memories.

Worldwide tributes poured in Thursday after the reports that the Argentina icon passed away at the age of 60, succumbing to heart failure after battling health issues in the past few weeks.

Argentina's President Alberto Fernandez said, "Diego was Argentina in the world. He gave us joy and we will never be able to repay him for so much joy." The country announced three days of national mourning following the death of the legend, and the president has offered the presidential palace for the footballer's funeral.

In Argentina, fans gathered in spots linked to the life of the player, including the small home where he was raised in the Villa Fiorito area, and the stadium of Argentinos Juniors, where he started his career in 1976.

"The Argentine Football Association, through its President Claudio Tapia, expresses its deepest sorrow for the death of our legend, Diego Armando Maradona. You will always be in our hearts," the AFA tweeted.

"As the best player in the 20th century, World Cup winner Diego Maradona made a tremendous contribution to the game of football, and brought so many beautiful and indelible memories for Chinese fans," the Chinese Football Association wrote in a statement on Thursday morning.

"The death of the Argentine legend heavily saddens all who love the sport. We salute his glorious career and bid farewell to the King of Football," the statement said.

The passing of the Argentine icon also profoundly touched a number of current stars of the game.

Lionel Messi, Maradona's heir and dubbed "modern Maradona" by fans who played under the man he grew up idolizing for the Argentina national team in 2008-10, wrote on Instagram, "He leaves us but he doesn't go anywhere because Diego is eternal. I keep all the beautiful moments lived with him and I wanted to send my condolences and best wishes to all of his friends and family."

Cristiano Ronaldo, who, alongside Messi, is regarded as one of the greatest of today's game, also offered his personal tribute. He posted, "Today I bid farewell to a friend and the world farewells to an eternal genius" on social media. 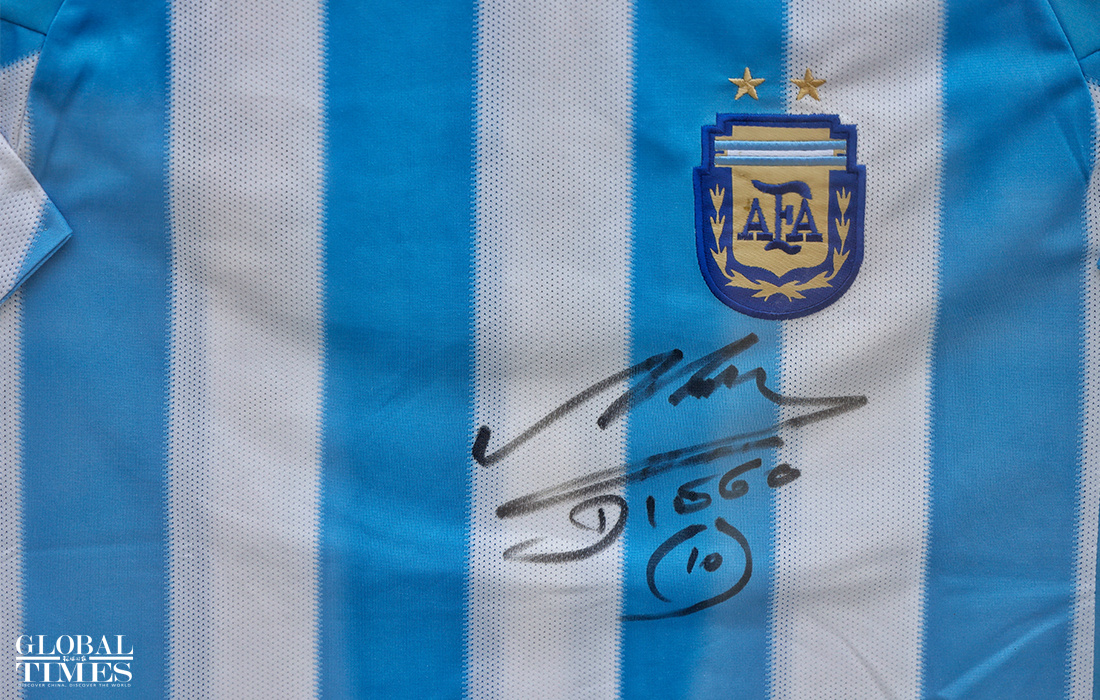 Maradona rose to international fame when he lifted the FIFA World Cup as the captain of Team Argentina in 1986, the very first time China started live broadcasting of the football world championship.

His thrilling "Hand of God" goal - scored with the help of his hand - and "Goal of the Century" - scored after dribbling past six opponent players - in the quarterfinals against England became widely popular among Chinese fans.

And thanks to the broadcasting of Italian Serie A league games by state broadcaster Central China Television (CCTV) starting in the 1980s, Maradona's dominating performances at Napoli received wild applause from the Chinese audiences.

After returning to the Argentine league, Maradona, along with his Boca Juniors teammates, visited China in 1996 to play friendlies with China's top-tier league teams at the time - Beijing Guoan and Sichuan Quanxing.

Orchestrating the attack, veteran Maradona led his team to win the games 2-1 and 3-0, a year before his retirement as a football player.

Visiting Beijing in 2008 as an advisor to the Argentine national under-23 football team, Maradona also witnessed the team winning gold at the 2008 Summer Olympic Games.

Part of the star-studded young team, which featured later international stars Messi and Sergio Aguero, also made into coach Maradona's squad for 2010 FIFA World Cup where they advanced to the quarterfinals.

During an interview in 2017 when China and Argentina were celebrating 45th anniversary of the establishment of diplomatic ties, Maradona said that as the second-largest economy in the world, China is also home to the biggest number of football fans, and it would be a shame if China is not part of the World Cup games, CRI online reported.

Maradona wished - and also believed - that Chinese football would succeed in the near future, and he expressed his willingness to contribute to the training of young talent and the overall development of Chinese football, the report said.

Global Times reporter found that the national flag in the Embassy of the Argentine Republic in Beijing flied at half mast on Thursday to mourn the death of Maradona.

Some Chinese football fans, most of whom were born after the 1970s, went to the Argentine Embassy in Beijing on Thursday with flowers and candles to see off the legendary football player.

They put flowers in front of the No.10 shirt, a symbol of Maradona. The shirt was packed into a glass frame and placed outside the embassy, along with a replica of the FIFA World Cup.

In front of the camera of the Global Times reporter, they put their palms together devoutly to mourn the player and wiped their tears silently.

This day is the day of Maradona even in China, which is thousands of miles away from Argentina. Many Chinese people swarmed to various online platforms, including China's Twitter-like Sina Weibo and major music sharing platform Netease Music, and used different methods to mourn the legendary player.

Whether or not a football fan, Chinese netizens expressed their respect and love to the mercurial footballer, seeing him off for his final journey to commemorate the solid relationship between him and the country.

Four hashtags related to the death of Maradona made to the hot search chart of Sina Weibo on Thursday. The highest views reached more than 1.8 billion.

One of hashtags saying "When my father knew Maradona died" shows the important place of the player in the hearts of the elder generation in China and how many youthful memories to these people he brought.

"When seeing the sad news, my dad stopped eating his breakfast and became silent," one netizen wrote on Sina Weibo.

Another netizen posted screenshots of the chat history between him and his father. The dad shared his memory of the legend with his child, saying that in 1986 when Maradona led the Argentine team to World Cup victory, he sat alone in front of a small black-and-white television for the whole night.

"Since then, I did not miss a single game of Maradona. He is the superstar for our generation," the father wrote.

Related items including Maradona's No.10 shirt and his autobiography have been placed prominently on Chinese e-commerce platforms such as Taobao and Dangdang.

Maradona's jerseys have become one of the six most searched items on Taobao, and his book "Touched By God：How We Won the Mexico '86 World Cup" has gotten 100 percent positive reviews on Dangdang.

Music-sharing platform Netease Music launched a list of songs about Maradona. One of the songs has been played for more than 830,000 times. The song "Don't Cry for Me Argentina" ranked 10th on the daily chart of the music platform on Thursday.

Some users on Netease Music said that they were listening to the music and reading the posts on Sina Weibo at the same time to recall the shiny moments of Maradona's life. "Goodbye, my hero," one user wrote. 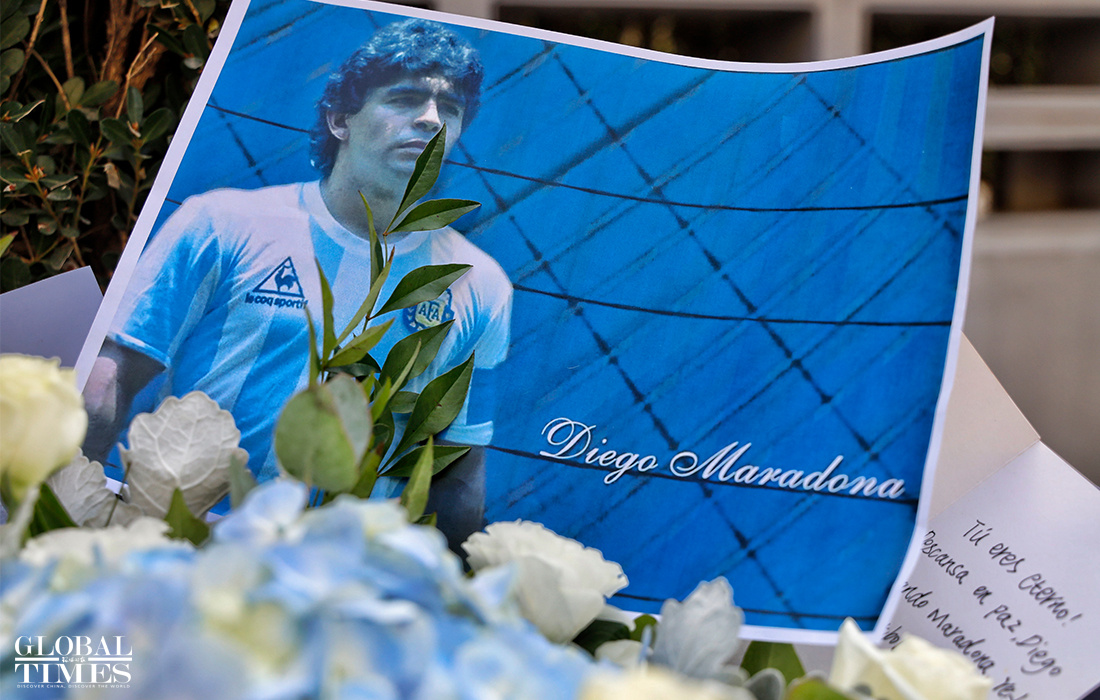 Maradona was first dubbed by the French newspaper L'Equipe as "half-angel, half-devil" for the majesty of his second goal and the notoriety of his first in the quarterfinal win against England in the 1986 World Cup. And such characterizations of his game continued in his life.

The legendary life of Maradona transcends the sport of football itself, earning him the status of an Argentine national icon and a worldwide idol, yet his personal lifestyle has been a matter of controversy, observers said.

Maradona's heyday came in before the advent of the information age, and enlightened Chinese fans of earlier generations what the best player was like, Wang Dazhao, a Beijing-based sports commentator, told the Global Times on Thursday.

The angel side of Maradona with heavenly skills and talents taught the kids around the world about the glories, joys and strengths of the football game, while his darker devil side that was underscored by almost self-destructive lifestyle off the pitch triggered deep thoughts, sports commentators said.

He became addicted to cocaine and was repeatedly banned from club and international football for failing drug tests, including testing positive for doping at the 1994 World Cup in the US. In 2004, Maradona spent time in intensive care after a heart attack, and his weight fluctuated during his battles with alcohol and drug addiction.

If being a great player and a decent man at the same time is the most demanding task, Maradona accomplished half of it with almost perfection in his lifetime but left the other half unfinished, Wang said.