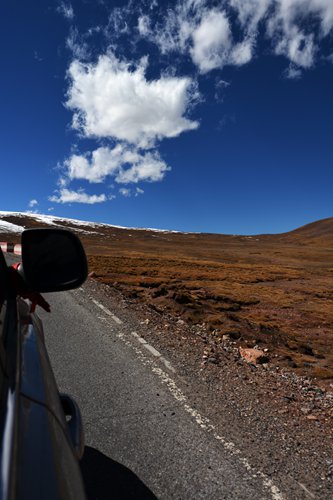 The Changtang Nature Reserve in the Tibet Autonomous Region seen through the window of a vehicle. Photo: IC

Liu Yinchuan may well have paid the ultimate price for his thirst for adventure. The adventurer had written in a WeChat post that his hiking expedition into the Changtang Nature Reserve in the Tibet Autonomous Region would last about 60 days. "If I don't turn up before December 20, 2017, please wait for me for another ten days. If I don't come out on January 1, please don't search for me. Please remember I have only one belief: to stay alive!" But Liu has yet to appear, and many are assuming the worst.Liu began his expedition on October 23 from Shuanghu county, Naqu city. His plan was to hike through the depopulated zones of Changtang, Hol Xil and Altun Mountains, and end his journey at Huatugou county in Qinghai Province, Beijing Youth Daily reported. The Lop Nur Wild Camel National Nature Reserve and the Altun Mountains in Xinjiang Uygur Autonomous Region, Hol Xil in neighboring Qinghai Province and Changtang in the Tibet Autonomous Region are the four main depopulated zones in China. They have been destinations for countless adventurers who yearn for their stunning natural vistas and high-risk thrills. These areas have been dubbed "living forbidden zones," and are notorious for their severe environments as well as their complex and volatile weather. But adventurers are rarely deterred by this, or the fact that entering these areas is illegal.Making preparationsGuanshanfeidu, an independent adventurer, managed to traverse the Changtang Nature Reserve in 2011, and is well known in this circle. He told the Global Times that the craze for traveling to depopulated zones began 12 years ago when the first batch of travelers entered the region.Since then, posts on forums and websites containing the word "depopulated zone" have received enormous numbers of clicks.  "It is wonderful to climb Mount Qomolangma - also known as Mount Everest - but it targets a small portion of travelers. Depopulated zones, however, seem closer to people. The adventure is reachable and is seen as the ultimate expedition," he said. But despite his enthusiasm, he discourages others from going on such expeditions. "The most important reason is that they are banned from going there. And going to depopulated zones carries a high risk of lack of oxygen, getting lost and running out of supplies," the experienced adventurer said. Liu, who has still not been found after more than 80 days, had planned to spend two months hiking over a distance of 1,500 kilometers. His average hiking speed would be 7.42 kilometers per hour. The average altitude of the places Liu traveled to be about 4,800 meters, going up to a maximum of about 5,429 meters. Liu did not go unprepared - he brought 20 kilograms of beef, 10 kilograms of cheese, and 30 kilograms of gear, including sleeping bags, a tent, hiking boots, a solar panel and GPS map, The Beijing News reported. Guanshanfeidu said that Liu may have suffered from severe dehydration, as the food he took with him was either too salty or too sweet, causing him to consume a lot of water. On top of that, natural water sources are not easy to find and are scattered over great distances in Changtang, he added. Before setting off, adventurers tend to spend weeks preparing for normal outdoor expeditions, let alone treacherous terrains like Changtang, he said. As traveling through Changtang alone on foot carries huge risks, most adventurers choose to make the expedition by SUV or form SUV fleets, Guanshanfeidu said. 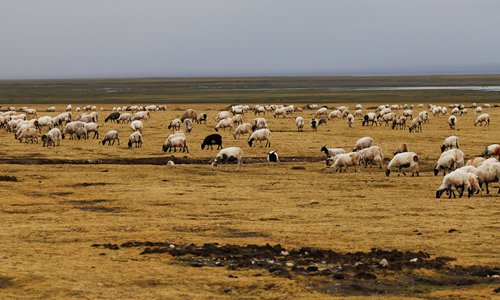 Environmental concerns The Altun Mountains, Hol Xil and Changtang in Tibet cover an area of about 340,000 square kilometers and are home to the endangered Tibetan antelope, wild yak and Tibetan wild donkey.Illegal activities have damaged the plateau ecology and the habitat of the wild animals, according to a joint notice released by the three nature reserves in 2015. Those who seriously damage the natural resources and environment will be handed over to the police. One man surnamed Li, who is a member of an SUV club based in Wulanbutong, Inner Mongolia, told the Global Times that going to those depopulated zones has been his dream for years. "I would hate to dress formally in suits and leather shoes. I would feel depressed. Pursuing the open air in depopulated zones is freedom," Li said. "Expeditions represent the vigor of a nation," said Guanshanfeidu, adding that while the activity itself should be encouraged, compromises have to be made to protect the environment and obey official directives. Liu's illegal entry into Changtang should not be copied by any adventurer, he said. The nature reserve  that Liu entered is a habitat for wild animals such as Tibetan antelopes, donkeys, yaks and snow leopards, which are all on the State protection list.A staff member from the Changtang nature reserve bureau told The Beijing News that anyone wishing to access the nature reserve needs to receive approval from the provincial forestry department. Furthermore, authorities would only allow expeditions done in vehicles, not hiking trips. Guanshanfeidu believes exploring the depopulated zones shouldn't be an experience that people brag about, but one in which people learn to have reverence for nature.