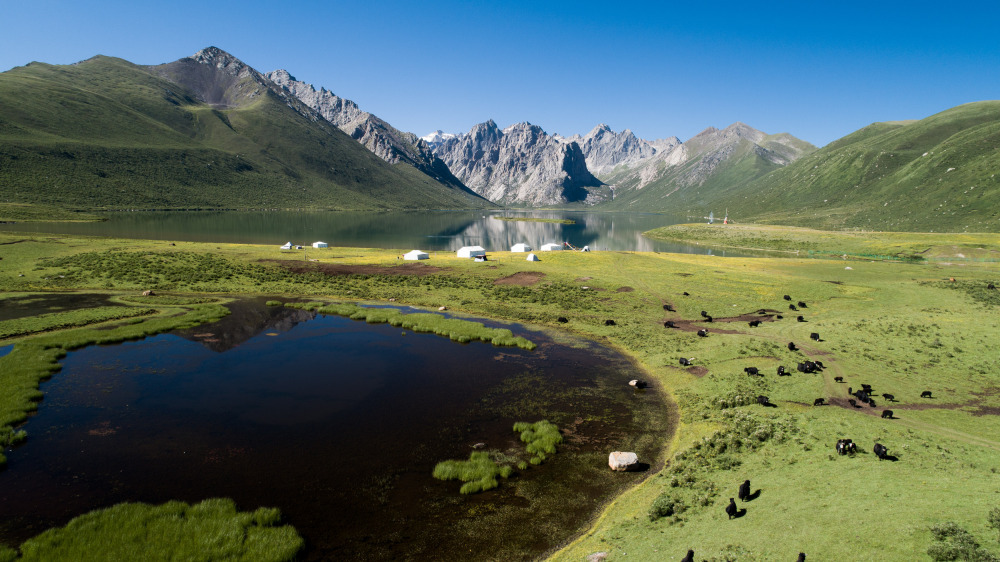 Aerial photo taken on July 9, 2019 shows the scenery at Mt Nyanpo Yutse in Tibetan Autonomous Prefecture of Golog of Northwest China's Qinghai province. Qinghai Province, located in northwest China, much of which lies on the Qinghai-Tibet Plateau, is the home to the headwaters of the Yangtze, Yellow and Lancang rivers. (Photo: Xinhua)

Wild bovids used to be important prey on the plateau, where hunting was a major subsistence strategy until the late Neolithic period.

Researchers from Lanzhou University, the Northwest Agriculture and Forestry University, the Chinese Academy of Sciences, the Gansu Provincial Institute of Cultural Relics and Archaeology, and the Natural History Museum in the United Kingdom applied ancient DNA analysis to fragmented bovid and rhinoceros specimens dating back 5,200 years, which were obtained from a Neolithic site located in the northeastern Qinghai-Tibet Plateau.

They demonstrated that present-day tropical gaur, large wild oxen, lived within a range that extended as far north as the margins of the northeastern Qinghai-Tibet Plateau during the late Neolithic period, from latitudes of 29 to 34 degrees north.

High summer temperatures in the late Neolithic period may have led the tropical animals to move to the northeastern Qinghai-Tibet Plateau, according to the research article published in the journal PNAS.

But from 5,000 to 4,000 years ago, tropical wildlife species such as gaur began to decline in numbers due to climate changes and human activities. Gaur is now an endangered species.