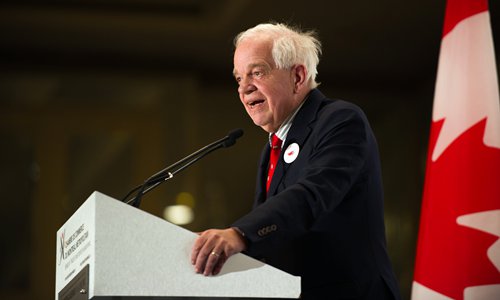 Canada's then Immigration, Citizenship and Refugees Minister John McCallum speaks at the board of trade of Metropolitan Montreal on March 16, 2016. Canadian Prime Minister Justin Trudeau on Saturday said he had sought and accepted the resignation of Canada's Ambassador to China. (Photo: AFP)

News about Canada's top diplomat in China being forced to resign after his outspoken comments on Vancouver's detention of a senior Huawei executive is making headlines on China's major media outlets and has been a trending topic on social media platforms over the weekend.

Chinese scholars reached by the Global Times on Sunday said the dismissal shows that political correctness is getting the overwhelming upper hand in Canada over issues related with China as a senior diplomat who knows China so well was fired for "telling the truth."

Canadian Prime Minister Justin Trudeau said in a Saturday statement that he had "asked for and accepted" the resignation of Canadian Ambassador to China John McCallum on Friday night.

The news soon climbed to the top 10 most searched topics by Sunday morning on China's biggest social media platforms.

While expressing regret for the departure of the diplomat, hundreds of netizens questioned the reason behind McCallum's forced resignation, with some even questioning whether Canada has any "national dignity" if it were willing to go this far to be a "US stooge."

The firing grabbed widespread attention on China's social media on Sunday. The hashtag for McCallum's resignation has garnered more than 10 million page views on Sina Weibo as of press time.

Worries and confusion were also expressed on Canada-based platforms over the weekend.

"It's a huge loss for Canada by firing John McCallum, a man with very deep insight and wisdom in dealing with political issues," internet user John Sheng wrote under the comment section of a CBC News report on Saturday.

"Though we may have a weak economy and be militarily insignificant, there is no excuse for us to also be morally weak. Playing the snarling lapdog while hiding behind the skirt of the biggest bully in town is demeaning and will eventually destroy any reason for our nationhood," net user Paul Repstock wrote.

Trudeau placed a lot of confidence in McCallum when he named him in 2017 to lead Trudeau's attempt to reset the Canada-China relationship, as Canada tried to diversify trade away from its main partner, the US, the Toronto-based thestar.com said on Saturday.

When McCallum took over the Beijing posting, he eagerly pointed out his strong personal connection to China. His wife is ethnically Chinese, Canada-based CBC News reported Saturday.

It seems that Vancouver has no intention to fix relations with China and it will be much harder for the country to turn back after they sacked the ambassador who could offer a more comprehensive understanding of China, Chinese analysts said.

Former Canadian ambassador to China Guy Saint-Jacques said the search for a new ambassador in Beijing could take months and Canada fired "someone that they could actually trust" concerning the already fractured relationship, CBC News reported.

Trudeau said in the Saturday statement that Jim Nickel, the deputy head of mission at the Canadian Embassy in Beijing, would represent the Canadian government in China.

Trudeau saluted McCallum for his almost two decades in public service, without elaborating on the reason why he fired the top Canadian diplomat in China.

The firing comes after McCallum told the Toronto Star in Vancouver on Friday that it would be "great for Canada" if the US dropped the charges against Huawei executive Meng Wanzhou.

McCallum also said on January 22 that Meng could make a "strong case" in court against a US extradition though he later apologized for the comment on Thursday, saying he "misspoke" and "created confusion."

"McCallum was fired because he told the truth that Canada's detention of Meng is a political instead of judicial matter, the truth that Vancouver and Washington are trying to hide," Yang Xiyu, a senior research fellow at the China Institute of International Studies, told the Global Times on Friday.

Meng is in Vancouver on bail and the US will have until Wednesday to submit an extradition request to Canada.

Meng, chief financial officer and also daughter of the founder of Huawei, was arrested in December 2018 in Vancouver at the request of the US, who accused Meng of breaching US sanctions on Iran, though Canada has no such sanctions.

Canada is going further down the wrong path, and firing McCallum is complicating the situation as Meng's detention has curbed the positive momentum of China-Canada exchanges, said Yang.

It is unprecedented for an ambassador to be publicly fired by a prime minister of Canada, Charles Burton, a former diplomat in the Canadian Embassy to China in the early 1990s and an associate professor at Brock University, told Canadian newspaper The Globe and Mail on Saturday.

This is not the first time McCallum has landed in hot water for his outspoken remarks on China.

In contrast with Canada's cautious remarks on the US government, McCallum said in January 2018 that Canada had more in common with China than the US under the presidency of Donald Trump.

Li Haidong, a professor at the Beijing-based China Foreign Affairs University, told the Global Times on Sunday that "instead of a decision based on diplomatic rationales, the dismissal shows that political correctness is getting an overwhelming upper hand in Canada over issues related with China."

"The firing, rare in the history of Canada's diplomacy, might prevent Canadian diplomats, scholars and officials from being frank about their suggestions and allow those politically-correct but factually wrong opinions to decide Canada's policy toward China," Li remarked.