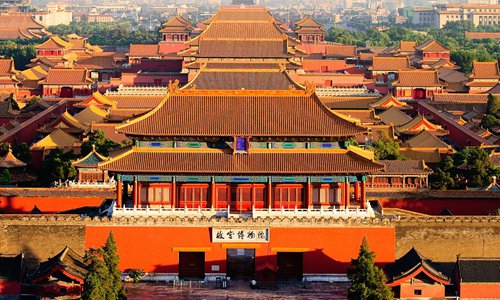 The doors of the Forbidden City in Beijing will open to the first family of the US on Wednesday when President Donald Trump visits China, according to the US ambassador to China."The Forbidden City on the first night will include the first families of China and the US, and I believe that will be a very personal and special occasion," Terry Branstad, US Ambassador to China, said on Monday.Trump is set to visit China from Wednesday to Friday in his 12-day trip to Asia."The Forbidden City is a very historical and significant place in China. It's right here in Beijing and it's a place where leaders can get together in an environment of great significance," Branstad said during a group interview with Chinese reporters.Peng Liyuan, wife of President Xi Jinping, will visit schools with US First Lady Melania Trump, Branstad said.The famous attraction will be closed on Wednesday and a simulation exercise for Trump's visit was conducted on Monday, Zhang Na, a staff member of the Forbidden City's media office, told the Global Times on Tuesday.The Forbidden City will be closed on Wednesday. It was crowded as usual on Tuesday, and more police have been spotted around the area.Many visitors said they understand the one-day closure, saying it reflects China's courtesy and respect for the US president."China is a country of rites and courtesy and the people understand [the closure]. We also hope that China and the US will maintain their friendship and avoid confrontations, which are bad for both," an elderly visitor surnamed Wang from North China's Shanxi Province told the Global Times.Other US presidents, including Richard Nixon and Barack Obama, also visited the Forbidden City during their visits to China.Xi is expected to treat Trump to dinner at the Jianfu Palace and the two presidents are expected to have discussions at the San Xi Tang, or the Hall of Three Rare Treasures, and the study room of Emperor Qianlong (1711-99), Hong Kong-based Ming Pao reported.Staff at the Forbidden City did not confirm the arrangement when reached by the Global Times on Tuesday. The arrangement, if confirmed, will mark the first time a US president will be treated to dinner at the Forbidden City, a symbolic place for Chinese culture and the home of former emperors, Li Haidong, a professor at the Institute of International Relations of China Foreign Affairs University, told the Global Times on Tuesday.Fresh impressionTrump's stay will give the president a fresh perspective on the political, economical, cultural and judicial developments in China, which is important for the president, because personal experience often shapes his understanding, Li said.The on-the-spot experience will also create a more positive impression of China, which is significant for improving bilateral ties, Li added.Diplomatic officials from China have repeatedly stressed that Trump and his family will receive "state visit-plus" treatment in China, with small-scale and informal get-togethers arranged for the two presidents so they get sufficient time to exchange views on issues of shared concern.As the world experiences complex and profound changes, the strategic communication between the two presidents is of great significance to the stable and healthy development of bilateral ties in a new era, Chinese foreign ministry spokeswoman Hua Chunying said at a news conference on Tuesday.The world is big enough for the positive interactions between China and the US and the peaceful and friendly coexistence of the two countries, Hua added.