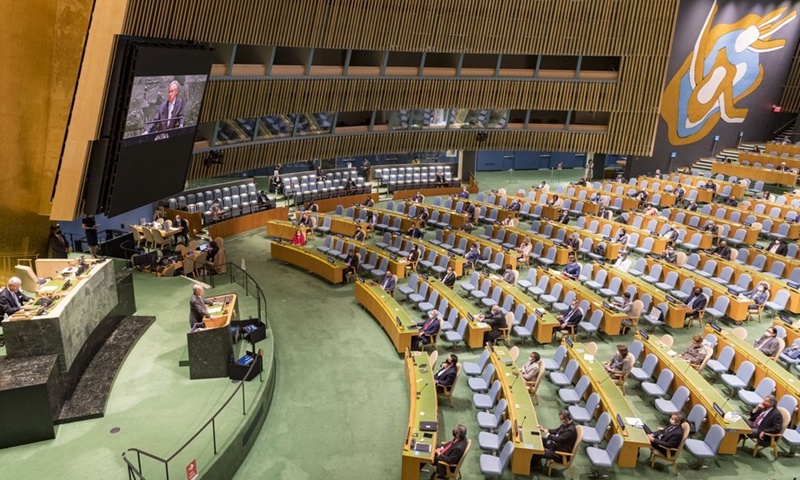 United Nations (UN) Secretary-General Antonio Guterres addresses the General Debate of the 75th session of the UN General Assembly at the UN headquarters in New York on Sept. 22, 2020. (Rick Bajornas/UN Photo/Handout via Xinhua)

Through a simple, rapid search of global news headlines, you will find the frequent descriptions of this week's most closely watched UN General Assembly: "US-China rift," "US-China clash". Commenting on the US' performance, many Western media tended to view US as being "isolated," and its unilateral efforts "widely derided."

International media sensed the growing China-US divide at the UN's High-Level Meeting, after US President Donald Trump spent half of his speech smearing China for allegedly spreading the coronavirus, and took aim at China's environmental and trade record.

Some media quoting analysts predicted that China-US tensions will escalate rapidly in the next few years. It appears that the world is now wondering whether a full China-US confrontation is inevitable, and whether it will split the world into two camps.

UN Secretary-General Antonio Guterres opened the assembly on Tuesday by warning "we must do everything to avoid a new Cold War," although he did not mention China and the US. "We are moving in a very dangerous direction," he said. "Our world cannot afford a future where the two largest economies split the globe in a great fracture - each with its own trade and financial rules, and internet and artificial intelligence capacities."

Some world leaders have also sounded the alarm at the UN General Assembly. An article published in the Wall Street Journal said the US-China rift has worried other world leaders at the UN, and the rising tensions have left other countries caught in the middle.

It quoted the speech of Philippines President Rodrigo Duterte at the UN as saying, "When elephants fight, it is the grass that gets trampled flat."

Calling the "China-US tensions flare," the BBC quoted the speech of French President Emmanuel Macron as evidence. Macron said the future of the world should not be reduced to the rivalry between the US and China, calling for a "modern new consensus" in tackling global challenges.

Chinese analysts believe it's unlikely for the US to change its tactics of viewing China as a strategic rival even after the US presidential elections, and a full China-US confrontation cannot be ruled out, although China will not proactively stir it.

The confrontation will lead to a global catastrophe, much worse than the Cold War, as the world would completely split into two, with zero room for cooperation in tackling global challenges such as climate change, pollution and public health crisis, analysts said. 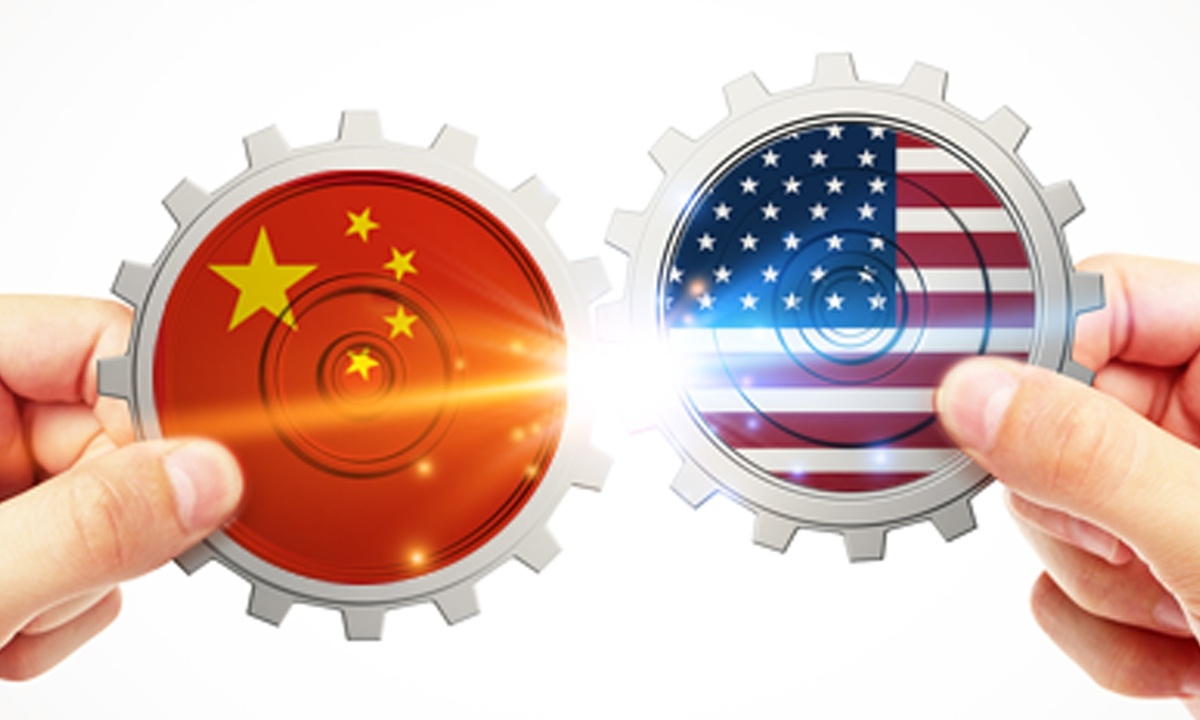 While demanding the UN "hold China accountable" for China's actions in allegedly spreading the coronavirus, Trump also took aim at China's environmental record and the UN.

The world is confronted with the severe challenges of COVID-19. There are also the problems of unilateralism, protectionism and bullying practices, said Zhang, while calling for more solidarity and cooperation, but not confrontation.

While Trump tried to shift the blame for his handling of the pandemic to China, his country has ironically hit another milestone in deaths from the virus. Data compiled by Johns Hopkins University shows that US COVID-19 deaths surpassed 200,000 on Tuesday, while the number of infections has reached more than 6.8 million. Both figures account for roughly one-fifth of the global total, but the US population is equivalent to less than five percent of the world's population.

Trump also attacked international organizations like the World Health Organization in his speech, claiming the WHO was virtually controlled by China.

Some US media outlets cannot stand Trump's accusations. A WSJ report said many Democrats blamed Trump for "isolating the US and diluting American influence in the WHO or other bodies."

It went on to say Trump's threat of withdrawal is often used as leverage to "influence partner countries, or get allies to pay more for shared defense."

Some US media linked Trump's address to his widely blamed effort to re-impose sanctions on Iran, saying his address came as "UN members push back against Washington," AP reported.

Wednesday's Washington Post article reported that the Trump administration walked on a "lonely path" at the UN where the US attacked WHO, and embarked on the "widely derided" effort to snap back Iran sanctions.

A week before the UN General Assembly, US media NPR predicted that the US "appeared to be isolated" at this year's General Assembly, saying that Trump's "America First" agenda left him out of sync with America's traditional allies as it has a long record of pulling out of international agreements, including one meant to tackle the world's climate crisis.

"Trump's smears and attacks against China were apparently aimed at campaigning for his reelection. Only his die-hard fans - those who do not care about truth but support him - will buy his words," Ding Yifan, a researcher at the Institute of World Development of the Development Research Center of the State Council, told the Global Times.

Any responsible media and country will not join his anti-China camp as they know that the Trump administration's unilateralism and hegemony will make them suffer, and the US will end up being isolated from the rest of the world, Ding noted.

Some state leaders, including the Cuban President Miguel Diaz-Canel Bermudez, slammed the Trump administration for its unilateralism and coercion at the UN General Assembly.

He said the US "despises and attacks multilateralism, uses financial blackmail in its relations with UN system agencies," and expands "coercion and unilateral sanctions" against those who do not bend to its designs.

If the US continues to fuel tensions with China, and ultimately leads to a full confrontation, it would split the world into two camps, resulting in more confrontations and loss of independent choices for small and medium-sized countries, Li Haidong, a professor at the Institute of International Relations of the China Foreign Affairs University, told the Global Times.

The common global challenges, such as climate change, nuclear proliferation, public health crisis, can no longer be solved through cooperation, but only worsened, and the ultimate consequences will be global destruction, Li said.

Looking back at history, facing the frenzied attack of the fascist forces during the World War II, the final victory of the allied camp led to international unity and cooperation, as US and China fought side by side. But now, the US has abandoned its historical legacy to resort to confrontation, hegemony and unilateralism, experts said.

However, Ding believes the confrontation at Tuesday's general debate would not continue as Trump's only purpose was to win reelection.

"The clash between the two great powers may pose difficulties to the effectiveness of the UN as a multilateral organization. But the situation was totally different in the Cold War period. At that time, the US and Soviet Union were standing on opposite positions," Ding said.

Experts noted that the harsh rhetoric did not hinder the practical exchanges between the countries, and economic ties still serve as the cornerstone of China-US relations.

In August, China's exports surged 9.5 percent from a year ago despite escalating tensions with the US. Shipments to the US jumped 20 percent to $44.8 billion, while imports of US goods rose by 1.8 percent to $10.5 billion.

China also reported a trade surplus of $34.2 billion with the US in August, up 27 percent.