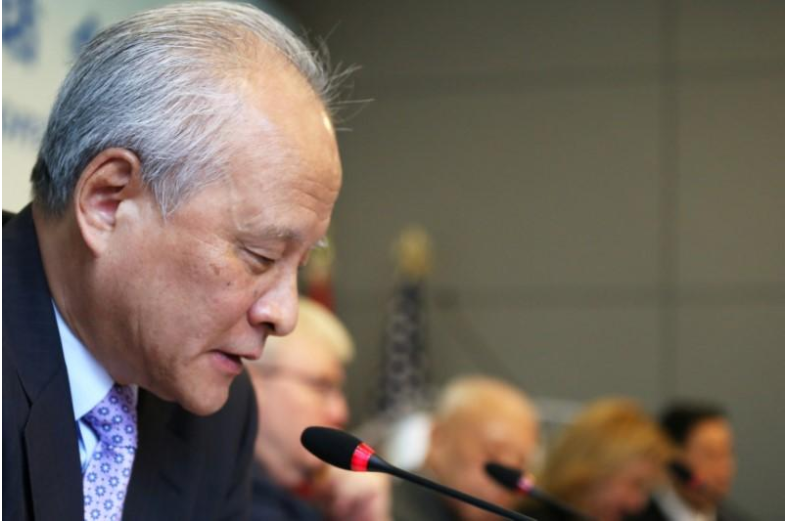 File photo: Ambassador of the People's Republic of China to the United States Cui Tiankai speaks during the "China and the U.S.: One Belt, One Road and 100-Day Plan," a discussion hosting high-level delegation of Chinese leaders, in Manhattan, New York, U.S., June 14, 2017. Photo: REUTERS/Bria Webb

China’s ambassador to Washington said on Monday U.S. President Donald Trump’s state visit to Beijing next week was a historic opportunity to boost cooperation between the world’s two largest economies, but warned against attempts to “contain” Beijing.

Cui Tiankai also stressed the urgency of efforts to find a negotiated solution to the crisis over North Korea’s nuclear and missile programs and warned of a “more dangerous” situation if tensions between the United States and Pyongyang continued.

Cui sought to play down differences over China’s massive trade surplus with the United States, saying Beijing was looking for ways to cut this and he was confident of “significant outcomes” from Trump’s Nov. 8-9 visit on the trade and economic fronts.

Speaking after senior U.S. officials, including Secretary of State Rex Tillerson, outlined an Asia-Pacific strategy involving greater cooperation between Japan, India, and Australia in the face of China’s rise, Cui said relationships should not be seen as a “zero-sum game” at the expense of another county.

Cui said Washington should not try to “interfere” in regional efforts to resolve disputes in the South China Sea, a vital strategic waterway that China claims, most of which is contested by several Asian countries.

“Maybe it would be better for the U.S. to let the regional countries ... find a way a way of managing the situation.”

Cui was asked about a call on Friday by a senior U.S. State Department official for revival of four-way dialogue between the United States, Japan, India and Australia to deepen security cooperation and coordinate alternatives for regional infrastructure financing to “predatory” Chinese options.

”I don’t think any attempts to form exclusive clubs in the region ... would help anybody,’ he said. “When people are saying these things about China, they might just look into the mirror...it might be describing themselves.”

Despite the cautionary words, Cui said he was sure the summit between Trump and Chinese President Xi Jinping would be successful, following on from their first meeting in Florida in April.

“This is a historic opportunity,” he said.

Cui reiterated China’s call for Washington to return to talks, while stressing Beijing’s willingness to step up pressure on Pyongyang through U.N. sanctions.

“We are ready to take up more cost and make greater efforts if there are more Security Council resolutions” he said.