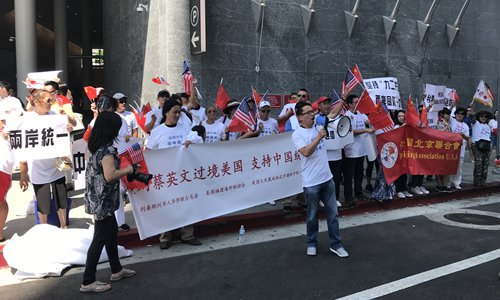 With violence over an extradition bill evolving into serious clashes with radical activists and proxy foreign forces confronting those who are determined to safeguard the Hong Kong Special Administrative Region, analysts are warning of a coupling of pro-independence forces in Taiwan and separatists in Hong Kong.

The warning comes after Taiwan leader Tsai Ing-wen said on Thursday during a visit to Saint Lucia that Taiwan will "follow humanitarian principles" in treating protesters who fled to Taiwan from Hong Kong.

Zhang Hua, an associate research fellow of the Institute of Taiwan Studies, Chinese Academy of Social Sciences, told the Global Times on Sunday that as Tsai uses the violence in Hong Kong to counter "pressure" from the mainland, the coupling of some forces in Taiwan and Hong Kong has already posed a real threat to the mainland.

Zhang said Tsai will neither accept these protesters as she claimed nor explicitly refuse them. "Tsai is well aware that some of the protestors are prone to violence and accepting them will only bring instability to Taiwan society. But she can use the issue to challenge the Chinese mainland in a bid to win next year's election."

"Tsai is well aware that some of the protestors are prone to violence and accepting them will only bring instability to Taiwan society. But she can use the issue to challenge the Chinese mainland in a bid to win next year's election," Zhang told the Global Times.

Tsai arrived in Denver, Colorado, on Friday on a US stopover, following her 12-day visit to four Caribbean "allies." The Taipei Times reported that a dozen Chinese were seen waiving the Chinese national flag and chanting "one China," near a Hilton Hotel where she was staying.

Analysts said that Tsai's trip wasn't aimed at Taiwan "allies" but was a pretense for US stopover visits to garner support for her 2020 election, while the island of Taiwan's economy continues to slow amid worsening cross-Straits relations.

The Forum on Global Promotion of cross-Straits Reunification was held by the Chinese Unification Promotion Party (CUPP) on Saturday in Taipei, Taiwan. More than 800 participants vowed to work for the country's reunification.

Chang An-lo, president of CUPP, said the party is concerned about the decreasing awareness of some Taiwan people toward national identity, thus decided to hold the forum, the Xinhua News Agency reported.