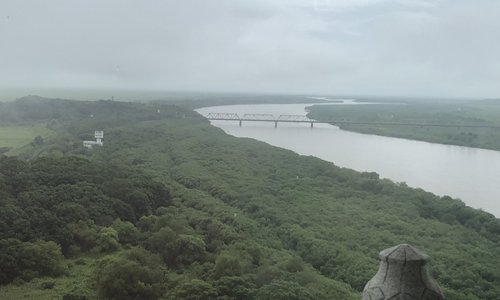 Tumen River from a 13-story building along the border of China, North Korea and Russia. (Photo: Global Times)

Every day, many Chinese tourists go to Fangchuan, a scenic spot located in Hunchun, Northeast China's Jilin Province, to glimpse the border scenery of China, North Korea and Russia.When standing on top of a 13-story building near the border, they can see the northeast end of China's territory, a bridge going across the Tumen River and a view of the Sea of Japan, which is 15 kilometers away.Although China has the right to use the Tumen River to access the Sea of Japan, it has not done so due to stagnant economic development in China's Northeast, unfavorable navigation conditions on the Tumen River, and the unclear political situation on the Korean Peninsula, experts said.However, discussions on the possibility of developing the river for navigation have been raised again following the seemingly improving Korean Peninsula situation and related proposals for promoting the economy of Northeast Asia.South Korean President Moon Jae-in unveiled the East Asian Railway Community Initiative on August 15, which would involve the six countries of Northeast Asia — South Korea, North Korea, China, Japan, Russia and Mongolia — and the US, South Korea's Yonhap News Agency reported.The development of a new international railway line would give a concrete impetus to open the Tumen River for navigation.If the two Koreas could update the Gyeongui Line, which connects Seoul, Pyongyang and Sinuiju, and connect railways and roads along the east coast of the Korean Peninsula, it would promote the peace process of the peninsula and help bring prosperity to the Northeast Asian region, Lü Chao, a research fellow at the Liaoning Academy of Social Sciences, told the Global Times.The Gyeongui Line could also connect to Northeast China's railway network, which runs across 1,380 kilometers and links Dalian in Liaoning Province and Hegang in Heilongjiang Province, Lü said.The Moon administration once laid out a New Economy Map Initiative for the Korean Peninsula. This economic plan envisioned three belts along the Korean Peninsula that join in the shape of an "H," a "West Sea logistics industry belt" connecting the capital regions in South and North Korea with Kaesong and Sinuiju, an "East Sea energy resources belt" connecting the Korean Peninsula with China and Russia, and a "border region belt" along the DMZ, South Korea's hani.co.kr reported. A large number of the five special economic zones and the 22 economic development zones that North Korea has established as the basis of the economic reforms and opening up promoted by North Korean leader Kim Jong-un are located in the "H" region, hani.co.kr reported.Linking the railways in China and North Korea will form a network covering the Northeast region of China, the Korean Peninsula and the China-Russia border area. The network will also link to the Trans-Siberian Railway, Lü said.Problems remainThe rapid development and increasing quantity of goods to be shipped in the Northeast Asia region will promote the development of shipping hubs, including the Tumen River, Lü said, noting there are still some problems with developing the Tumen River.Zhang Huizhi, a professor at Jilin University's Northeast Asian Studies College, told the Global Times, "China has the right to use the Tumen River but the bridge that links Russia and North Korea is low above the water surface, which leaves limited space for boats.""If the Tumen River wants to be put into bigger usage, Russia and North Korea should first agree to dismantle or alter the bridge. And there will be a lot of work on removing the sludge and sand in the Tumen River," Zhang said.She also noted that South Korea's proposal on promoting development in Northeast Asia may focus on cooperation with Russia since it regards China as a main competitor on cooperation with North Korea.