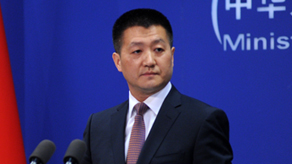 Spokesperson Lu Kang made the remarks when answering a question regarding Turkey's recent economic situation and foreign relations.

He said China was paying attention to the new trend in Turkey's economy and its foreign relations.

Turkey is an important emerging market country, and Turkey maintaining stability and development is conducive to regional peace and stability, said the spokesperson.

China believes that Turkey has the ability to overcome its temporary economic difficulties and hopes relevant parties would resolve differences through dialogue, said Lu.

Commenting on reports that the Industrial and Commercial Bank of China (ICBC) recently signed a 3.8-billion-U.S. dollar financing agreement with Turkey, Lu said China attaches great importance to economic and financial cooperation with Turkey, and supports enterprises of both sides signing deals in accordance with market rules.