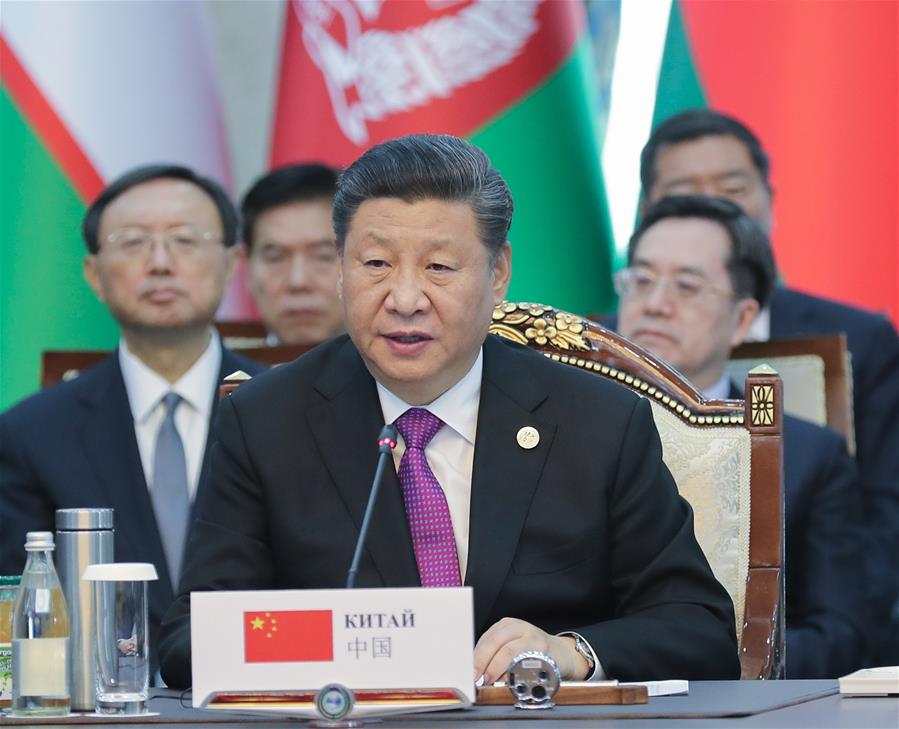 BISHKEK, June 14 (Xinhua) -- For a person, turning 18 means the coming of a new stage in life and more responsibilities.

After 18 years of growth, the Shanghai Cooperation Organization (SCO) has also come to a new stage of development.

At the 19th SCO summit here on Friday, Chinese President Xi Jinping proposed building it into a model organization of international relations against changing international situations.

After 18 years of development, the SCO has evolved into one of the major mechanisms promoting stability and prosperity in this very important patch of land.

Covering over 60 percent of the Eurasian landmass, the SCO is well-known for close cooperation among its member states, and the key to its high effectiveness lies in the Shanghai Spirit, a core value and philosophy shared by those countries.

Addressing leaders from across Eurasia and representatives of international organizations at the summit, Xi highlighted the Shanghai Spirit in building the SCO into a paradigm of unity and mutual trust among countries.

He urged the SCO members to have a keen appreciation of the trend toward world multi-polarization and economic globalization, search for wisdom in the Shanghai Spirit, which features mutual trust, mutual benefit, equality, consultation, respect for cultural diversity, and pursuit of common development, and draw strength from unity and cooperation so as to build a closer community with a shared future for the organization.

Kubanychbek Taabaldiev, director of Kyrgyzstan's Kabar News Agency, said the Shanghai Spirit is the ideological unity of the member countries when "everyone is interested in equal relations."

Within the SCO, the Shanghai Spirit has been effective in bridging the gap among countries with various and even conflicting interests, according to Taabaldiev.

Against the increasing tendency toward unilateralism, many structures and intergovernmental institutions are losing their former effectiveness, observed Sergei Sanakoyev, president of the Russian-Chinese Analytical Center.

Yet, "the SCO demonstrates a different type of international relations that is very attractive for many countries," Sanakoyev said.

Relations within the SCO are built upon the basis of mutual respect, while problems are solved on a compromise basis of working out suitable solutions for all, he said, adding that the very existence of the SCO has "serious influence on the development of world processes."

BELT AND ROAD - POWERHOUSE OF SCO

To build the SCO into a model organization that stresses mutual benefit and win-win results, Xi called on member states to advocate multilateral trading system, build an open world economy, and put forward more institutional arrangements in trade and investment liberalization and facilitation.

To this end, he also called for implementing the agreements reached at the Second Belt and Road Forum for International Cooperation, further synergizing the Belt and Road Initiative (BRI) and the development strategies of other members, as well as such regional cooperation initiatives as the Eurasian Economic Union, so as to promote an all-dimensional inter-connectivity.

Many leaders present at the summit spoke highly of the progress made in the joint construction of the Belt and Road and reiterated support for docking the BRI with development strategies of their countries.

Since more than two millennia ago, the Central Asian region has been at the crossroads of the ancient trade routes connecting the East to the West.

This piece of inland area, where most SCO founding members are located, is one of the birthplaces of the BRI -- a trade and infrastructure network connecting Asia with Europe and Africa. It was in Kazakhstan Xi first brought forward the initiative of the Silk Road Economic Belt, part of the BRI.

Central Asian countries are considering connecting their own development plans with the BRI, because it gives them a chance to become major transportation hubs, SCO Secretary-General Vladimir Norov said, adding that the Belt and Road cooperation allows them to build ports and provides an opportunity for mutual development.

As the world is witnessing the negative impact of unilateral and protectionist measures on world economic growth, said Norov, the member states are in favor of deepening interaction to meet the challenges of jointly creating an open global economy.

Maintaining security and stability has always been the main task since the inception of the SCO.

Speaking at the summit on Friday, Xi proposed turning the SCO into a model group that underscores the sharing of weal and woe.

Xi called on member countries to hold fast to the concept of common, comprehensive, cooperative and sustainable security, take multiple measures to combat the "three forces" of terrorism, separatism and extremism, and enhance de-extremization cooperation.

In his speech, Xi also mentioned the situation in Afghanistan, an observer state of the SCO, saying he sympathizes with the sufferings of the Afghan people.

It is believed by China and all other SCO members that one of the key factors of preserving and enhancing security and stability in the SCO region is a prompt settlement of the Afghan issue.

Therefore, Xi said, the group needs to play a constructive role in promoting peace, reconciliation, stability and development in Afghanistan.

Sergei Sanakoyev, the analyst, said now the problem of ensuring peace and stability in the region has become even more urgent in connection with the practical actions to form new transport arteries within the framework of the BRI.

The development of global trade is impossible without reliable safety of transport routes, Sanakoyev said, adding that the responsibility of the SCO in this regard is hard to be overestimated.

"One benefit from the SCO membership is indisputable," said Taabaldiev, the news agency director. "Almost all members feel greater security against the still active international terrorism."