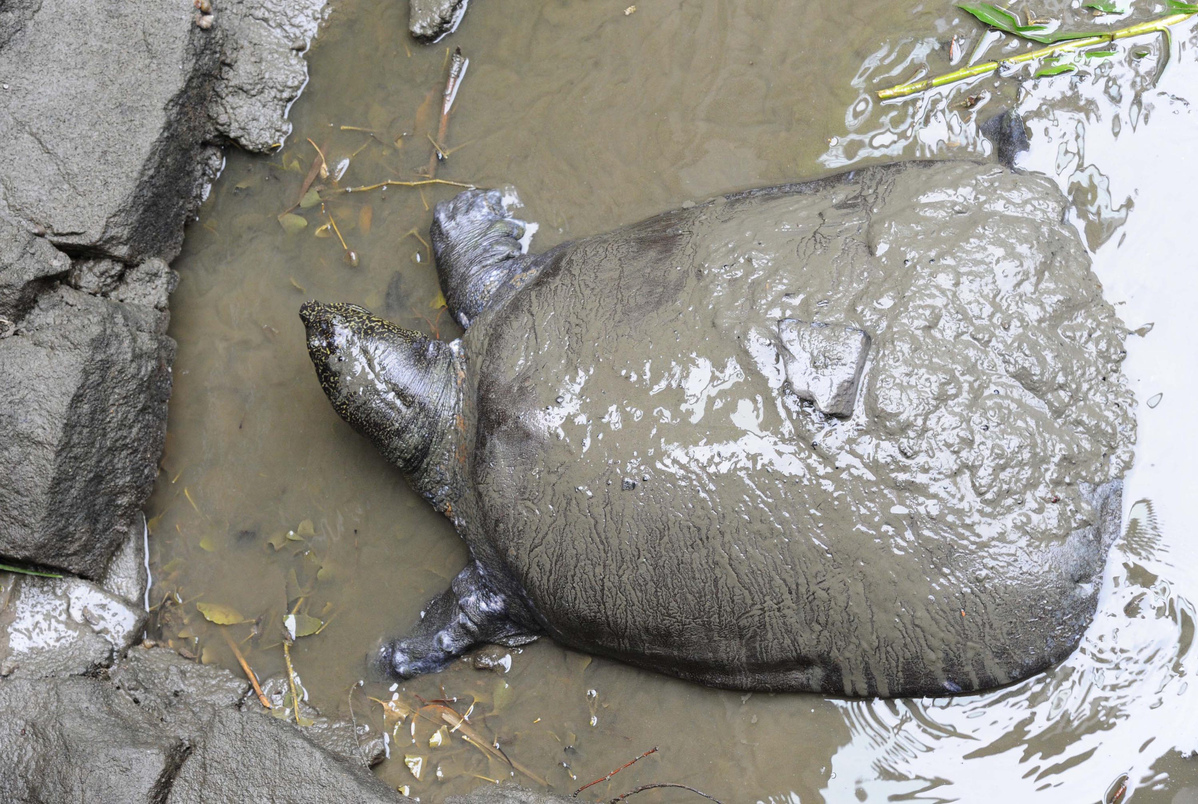 The only female Yangtze giant softshell turtle in China as seen in 2015. (Photo: China Daily)

The female turtle died after an artificial insemination procedure at the Suzhou Zoo in Jiangsu province on Saturday. Though Chinese and foreign experts confirmed that it was healthy before the surgery, the animal went into a coma and never woke up.

The operation went well, according to the zoo. The female turtle was more than 90 years old and had gone through four such procedures.

The experts harvested the turtle's ovarian tissue and stored it in liquid nitrogen for future research. They are working on the carcass to determine the cause of death.

The turtle came from Changsha Zoo in Hunan province in 2008 to meet the only male specimen in China, which continues to live at the Suzhou Zoo.

The male turtle, thought to be more than 100 years old, has poor sperm motility and its genitals were damaged. Since it could not naturally impregnate the female, experts had undertaken four insemination procedures since 2015.

"It's a disastrous loss for the protection of the species," said Liu Nonglin, chief engineer of the Chinese Association of Zoological Gardens. "The experts had researched former insemination surgeries, consulted colleagues and made the best surgery and rescue plan. The team even experimented on three male and two female large-sized Asian turtles using the same surgical procedures. But the tragedy happened even though the surgery was well planned."

More than 1 meter in length and weighing more than 100 kilograms, Yangtze giant softshell turtles are the world's largest freshwater turtles. Besides the one male left in China, two other animals, whose sex is unknown, have been observed in the wild in Vietnam.

"Artificial insemination surgery for the turtle requires procedures such as anesthesia, blood sampling and sperm extraction," Wen Cheng, a turtle expert with International Union for Conservation of Nature, was quoted by Lifeweek.com.cn as saying.

"The turtles' circadian rhythm is slower than a mammal's, which means that the signs of trouble during the procedure will not be as obvious as with mammals. It is easier to cause irreversible damage if an unexpected situation is encountered."

"It's obvious that their near-extinction was caused by humans," he said. "We haven't done the basic work of researching the turtles' biological information, behaviors and genetics. The knowledge we have is too limited to save the species."