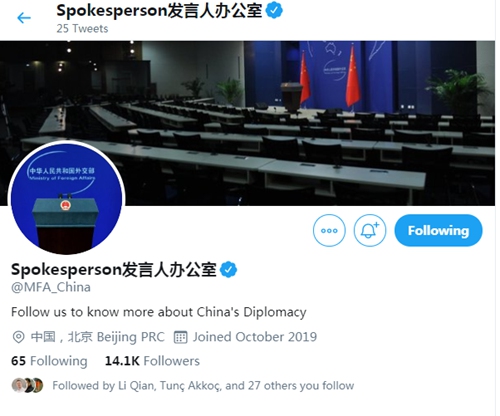 On November 2, China's Ministry of Foreign Affairs opened its official Twitter account, following the efforts of Chinese embassies and diplomats around the world.
The account, dubbed "spokesperson office," has more than 14,200 followers.
Tweets are often quotes from daily foreign ministry press conferences with a picture of the spokesperson for a given week. Hua Chunying was the spokesperson during the account's first week.
The ministry also tweeted in solidarity with Meng Wanzhou, Huawei's CFO, who has been under partial house arrest in Canada for one year. "Light up #MsMengWanzhou's way home with justice and warmth," read the foreign ministry's tweet.
The Chinese Foreign Ministry has followed at least 65 twitter users, including more than 30 Chinese embassies around the world, including embassies in the US, Japan, and Poland. It followed 19 Chinese ambassadors. Most of the ambassadors launched their own Twitter accounts within the past three months.
Liu Xiaoming, Chinese Ambassador in the UK, joined Twitter in October and has posted more than 400 tweets on issues such as China-UK relations, Hong Kong and BRICS.
Chinese diplomats making a Twitter presence is fairly new. Only a few Chinese diplomats had Twitter accounts as recently as this summer.
Zhao Lijian, current deputy director general of the Chinese Foreign Ministry's information department, has been the most active Twittter user since he joined the platform back in May 2010. He was the minister counselor of the Chinese Embassy in Pakistan before becoming the department director in August. Following Zhao, Chinese Ambassador to the US Cui Tiankai first tweeted on July 8 of this year.
Chinese experts said the new generation of Chinese diplomats have been more open and more likely to follow the current trend. But their appearance on Twitter may make the Western world "uncomfortable."
Technically speaking, using Twitter is necessary, Gao Fei, vice president of China Foreign Affairs University told the Global Times on Sunday. "If all others are using Twitter to express their voices but we do not, it would be self-deceiving."
While noting the significance of Weibo, Gao said that if China's own social media system doesn't keep track of the world, Chinese voices could lose their impact in global discourse.
He noted that Chinese diplomacy has mainly been defined by a fighting spirit.
Veteran Chinese diplomat Wu Jianmin, who served as the former president of China Foreign Affairs University, has introduced a communication studies course to teach future Chinese diplomats about how to communicate with the rest of the world, Gao said.
"Now China has good technologies, and so many people can speak English. Therefore we could not be trapped by the online attack," said Gao noting that "the voice of 1.4 billion people must be heard by the world."