CHINA Two captive-bred pandas to be released into wild

Two captive-bred pandas to be released into wild 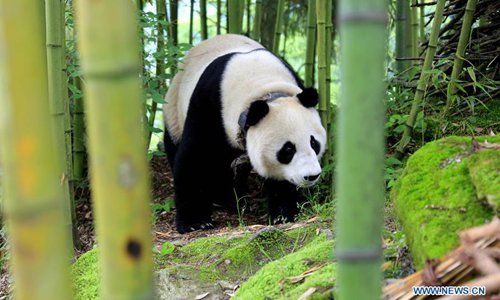 A giant panda is spotted wandering in Jinbo Village, Wenchuan County, southwest China's Sichuan Province, May 31, 2018. A giant panda has been caught casually wandering around a village in southwest China's Sichuan Province Thursday morning, as locals were repairing a road. Worried about scaring the animal, the villagers immediately stopped working and reported its presence to forestry authority and the local government. The China Conservation and Research Center for Giant Pandas said it was a captive panda that belonged to the center. (Photo: Xinhua)

Two captive-bred pandas will be released into the wild from a national nature reserve in Southwest China's Sichuan Province on Thursday.
It will be the first time for the China Conservation and Research Center for Giant Pandas to release captive-bred giant pandas. Other giant panda raising bases have in the past released nine captive-bred pandas.
The two female pandas will be released into the Longxi-Hongkou National Nature Reserve, a habitat for wild pandas, near the city of Dujiangyan.
The two pandas named Qinxin and Xiaohetao have different personalities. Qinxin who was born on June 16, 2016 is said to be naughty, active and lively and Xiaohetao who was born on July 30, 2016 is described as gentle, graceful and pretty, Chengdu Evening News reported on Tuesday.
Both of them have received systematic wilderness training at the center. They have mastered life in the wild, including foraging, finding water, roaming, and being alert to dangers, the report said.
Releasing the captive giant pandas could put new genes into the giant panda population, which could reduce the risk of inbreeding and increase genetic diversity, the report said.
It could also provide experience in helping rescued wild pandas re-enter the wild population. The monitoring of reintroduced bears can also increase data on the behavior, reproduction, and disease of giant pandas, it noted.
By the end of 2017, China had trained 25 captive-bred giant pandas to adapt to the wild. Of the nine captive-bred giant pandas released into the wild, seven are thought to have survived, the Xinhua News Agency reported.
There are 548 captive pandas in world, Xinhua reported, citing China's National Forestry and Grassland Administration.