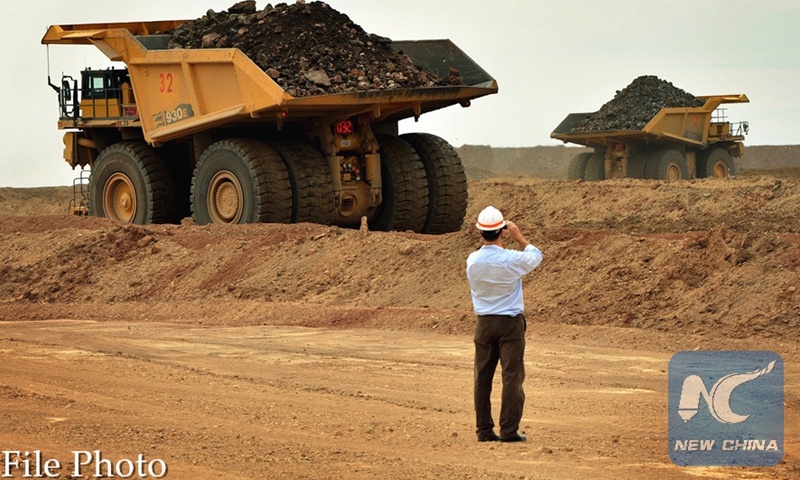 File photo taken on June 23, 2012 shows trucks working the open pit mine at the Rio Tinto operated Oyu Tolgoi gold and copper mine in the Gobi desert, southern Mongolia.

Two Chinese companies have partnered with UK-based mining group Rio Tinto to supply the latter's project to overhaul Cape Lambert in Western Australia, in what Rio Tinto called "close cooperation amid the pandemic."

According to an article published by Rio Tinto on its WeChat account, Shanghai Construction Group and Jiangsu Yangzi Chankong Offshore Engineering Co have delivered more than 7,000 tons of tubular piles and 20 steel bollard modules for the project, despite the effects of the pandemic.

According to the article, Jiangsu Yangzi Chankong may also be a supplier for Rio Tinto's project to upgrade Canada's Port Alfred, based on the company's successful cooperation on Cape Lambert.

Jamie Sanders, a senior executive at Rio Tinto, said that Chinese suppliers have showed strong resilience and spirit amid the coronavirus challenge, and have delivered high-quality products in a timely manner. He also thanked the Chinese suppliers for helping the company in achieving an important milestone in the Cape Lambert project.

This is also an example of Chinese companies' participation in Australia's iron ore business via global industry giants, despite cool relations between China and Australia that have had a negative influence in many trade sectors. Politicians from Western Australia have called on the Australian government to reset the country's relations with China, for fear that Australian iron ore trade could be hurt by the political friction.