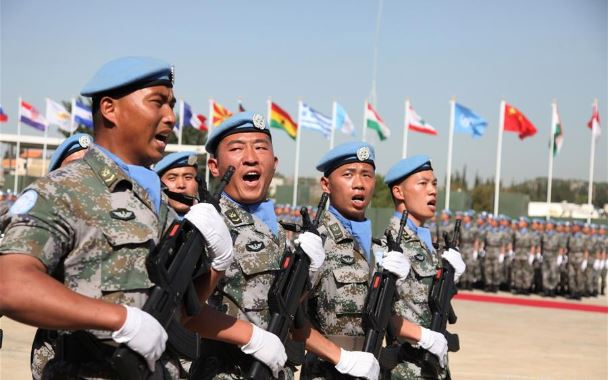 UNITED NATIONS, May 24 (Xinhua) -- Two Chinese military officers on Friday were awarded together with 28 others the United Nations Peacekeeping Medal for their contributions to the UN peacekeeping effort.

Colonel Zhang Qiman and lieutenant colonel Duanmu Donglin, currently working at the UN Department of Peace Operations (DPO), were recipients of the medal, which was presented to them by Jean-Pierre Lacroix, undersecretary-general for the DPO.

"I feel so proud that I could work at the UN headquarters as a staff officer," Zhang said, adding that actively participating in UN peacekeeping operations is "a new historic mission and task."

Zhang expressed her gratitude to the motherland, which she said gives her "confidence and courage" so that she could do her utmost for UN peacekeeping operations.

Both Zhang and Duanmu had worked in UN peacekeeping missions prior to their posting at the UN headquarters.

Lacroix told reporters after the awarding ceremony, "We are thanking them for their services. Peacekeeping is a very demanding work and we are grateful for everything they do."

"We have excellent colleagues from China. As a permanent member of the Security Council, China's role is extremely important in the view of improving the impact and performance of peacekeeping," he added.

Currently, China deploys a total of 2,508 uniformed personnel, including 70 women, to eight of the UN peacekeeping missions, including those in South Sudan, Lebanon, and the mostly deadly Mali, according to the UN.

In December, China's share of the UN peacekeeping budget was raised from 10.24 percent to 15.22 percent, making it the second largest contributor only after the United States.

UN headquarters observed the International Day of United Nations Peacekeepers on Friday. Secretary-General Antonio Guterres laid a wreath to honor all UN peacekeepers who have lost their lives since 1948 and presided over a ceremony at which the Dag Hammarskjold Medal was awarded posthumously to 119 military, police and civilian peacekeepers, who lost their lives in 2018 and early 2019.

The International Day of United Nations Peacekeepers was established by the General Assembly in 2002, to pay tribute to all men and women serving in peacekeeping, and to honor the memory of those who have lost their lives in the cause of peace. The General Assembly designated May 29 as the International Day of United Nations Peacekeepers in commemoration of the day in 1948 when the UN's first peacekeeping mission, the UN Truce Supervision Organization (UNTSO), began operations in Palestine.