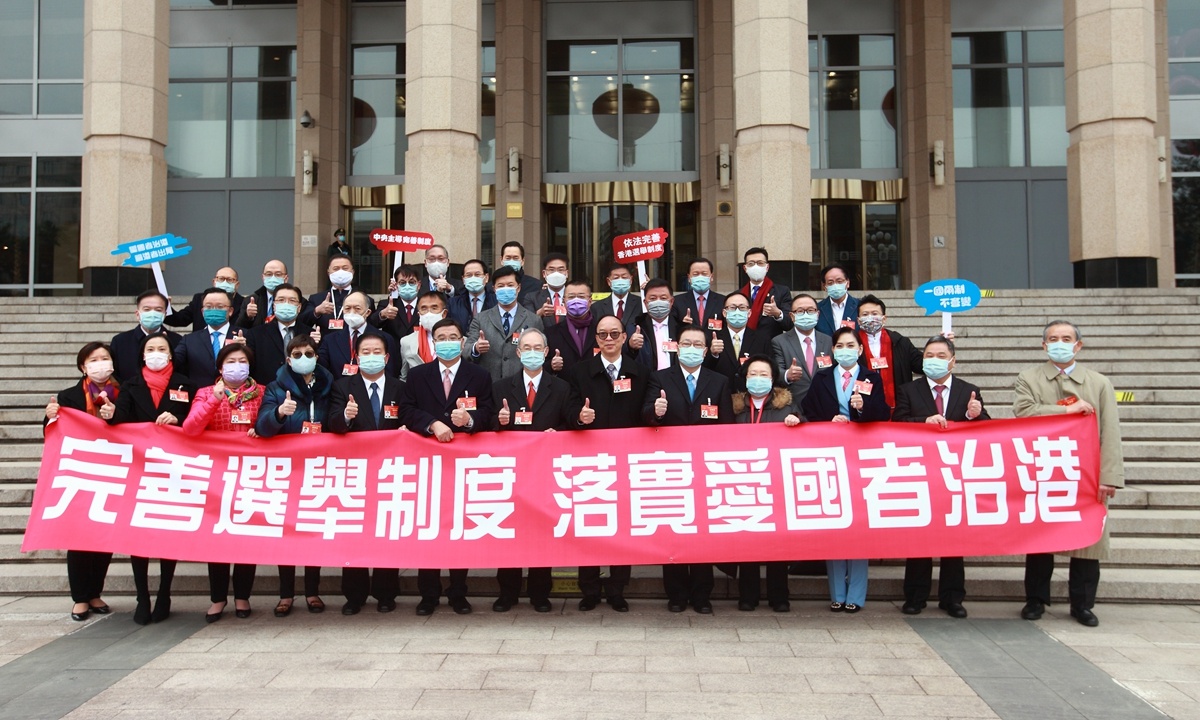 All Hong Kong deputies to the National People's Congress post for a group photo to show support to the draft decision to improve Hong Kong's electoral system in Beijing on Friday.

Two former Hong Kong chief executives voiced support for the draft decision on improving the electoral system of the special administrative region made at the opening of the annual session of China's legislative body on Friday.

During a speech at the opening session of the National People's Congress (NPC), Wang Chen, vice-chairman of the NPC Standing Committee, urged improvement of Hong Kong's election measures and the size, composition and formation method of the Election Committee, with the aim of building a democratic electoral system with Hong Kong characteristics.

Tung Chee-hwa, the first chief executive of Hong Kong upon Hong Kong's return to China on July 1, 1997, who remained in the position until 2005 and is currently a vice-chairman of the National Committee of the Chinese People's Political Consultative Conference (CPPCC), said in a statement that implementing the principle of patriots governing Hong Kong and improving the special administrative region's electoral system is a major move by the central government to practice the "one country, two systems" principle which matters to the welfare of the 7.5 million Hongkongers, as well as to the peace and stability of Hong Kong.

Tung said the principle of "patriots governing Hong Kong" must be fully implemented and the chaos in Hong Kong's political realm in the past few years needs to be rectified. He also said separatist forces must be stopped from entering Hong Kong's governance structure and they should have no room to jeopardize the country's sovereignty, security and development interests and its long-term prosperity and stability.

Tung believes Hong Kong is at a critical moment for reforms and the agenda of this year's two sessions is particularly significant for the future of Hong Kong and the country.

Leung Chun-ying, the third chief executive of Hong Kong and also a vice-chairman of the CPPCC National Committee, welcomed the NPC's decision to improve Hong Kong's electoral system on Friday.

He believes that as the Election Committee nominates and selects the chief executive, chooses the larger proportion of members of the Legislative Council and nominates all candidates of LegCo members, it will not only ensure that Hong Kong is governed by patriots but also improve the relationship between executive and legislative bodies.