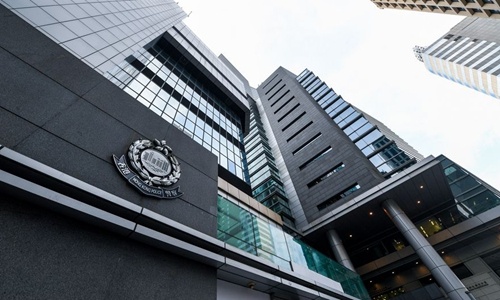 Six people were arrested in Hong Kong Special Administrative Region (HKSAR) over the weekend on charges of conspiracy to defraud in the general elections for the Legislative Council (LegCo), and sponsoring secessionist activities, including two district councillors and a radio DJ.

The Hong Kong Police Force (HKPF) confirmed to the Global Times that they have arrested two district councillors and their sponsor on Sunday. Local media reported the two arrested councillors are Henry Wong Pak-yu and Timothy Lee.

The three were arrested on suspicion of conspiracy to defraud HK$4.89 million (approximately $630,800) in election campaign support for the now-delayed LegCo general elections, which were originally scheduled for September.

The other three were detained on Saturday, including a DJ from D100 Radio known as "Giggs", his wife and his assistant, Hong Kong media reported.

The three are charged with sponsoring secessionist activities and money laundering, according to the HKPF. Giggs launched a crowdfunding campaign on social networking sites in January, claiming that the money collected would be used to help residents leave Hong Kong after the protests. However, further investigation suggests the money was used to assist secessionist individuals and organizations.

When asked about Saturday's arrest, HKPF Commissioner Chris Tang did not disclose details of the case, but noted, "If you don't want to be arrested by the police, don't break the law."