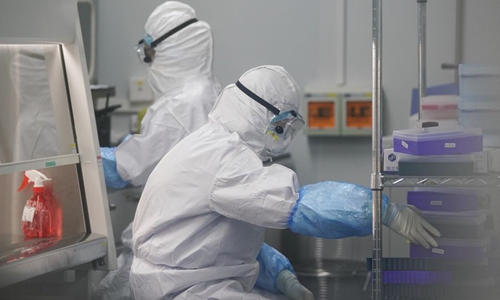 A total of 512 cases have been confirmed in five prisons in Zhejiang, Hubei and Shandong provinces on Friday.

The Justice Department of Sichuan Province held a conference on Friday and asked all prisons in the province to be locked down immediately, according to a notice published on the department's official website on Sunday.

There will no longer be rotating duty shifts in the prison and the controls will be implemented for a month, the notice said.

The department also requested prisons and rehabilitation centers to seal and store all surveillance videos since January 22 for inspection.

Since January 25, the department has asked all newly admitted prisoners and drug addicts, as well as those returning to prison from visiting their relatives, to be quarantined. In addition, people entering the prisons and rehabilitation centers must have their body temperature taken and wear masks. All vehicles and materials entering the prisons and these centers must be tested and disinfected.

All outside visits, transfers of prisoners and drug addicts, and education activities have been suspended, and inmates will no longer be eating together. All large-scale activities in prisons and these centers have also been suspended.

All these people have been required to stay at home in quarantine and are not allowed to go on duty, have contact with other personnel on shift or their families. No case of infections among police, prisoners or drug addicts have been reported so far.

According to a notice published by the Ministry of Justice on February 14, Chongqing has already implemented wartime control management in its prisons. Previously, prison administrations in South China's Guangdong Province and Guangxi Zhuang Autonomous Region and North China's Hebei Province had announced complete lockdowns.