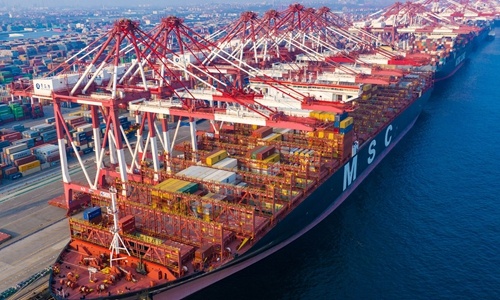 Containers to be loaded on vessels for export at Qingdao Port in East China’s Shandong Province (File Photo: IC)

Two workers who offloaded imported seafood at Qingdao port in East China's Shandong Province have tested positive for the coronavirus and both are asymptomatic, local health authority said on Thursday.

The products have not entered the market, and have been sealed off.  Authorities have tested 1,440 samples from the products and the warehouse and some have shown a positive result.

From July to mid-August, 10 positive coronavirus cases were reported in nine locations on the imported frozen seafood or the packaging. Seven involve frozen white shrimp from South America, according to media reports.

And some experts believe that the virus can remain active longer in cold chain transportation and can even survive for years at temperatures of minus 10 to 30 degrees Celsius.