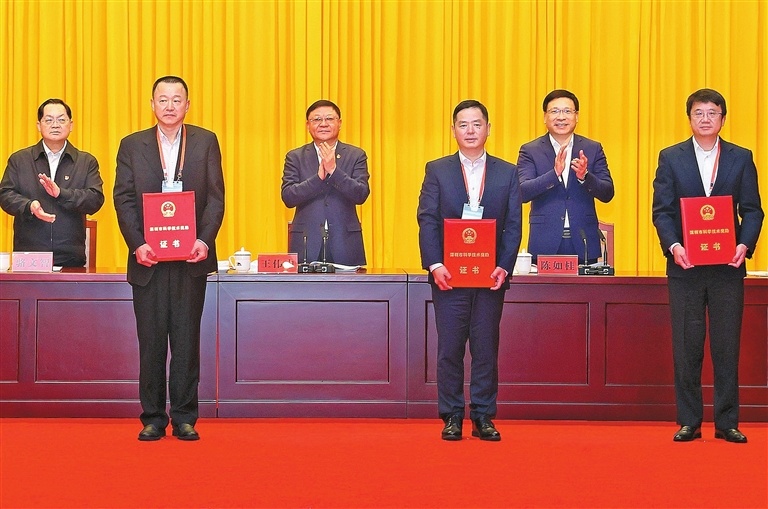 Huang engages in plant physiology and applies big data in the breeding of vegetable crops. The second-prize winner of the National Natural Science Awards in 2018, Huang unveiled the genomic history of potatoes and vegetables, and the metabolic biological mechanism of vegetable nutrition and flavor. Huang has participated in many international genomics plans and revolutionized the breeding of potatoes. Huang’s research has been included as part of China’s agriculture science major progress in 2017 and 2018.

Li with Appotronics invented a new type of laser display technology that combines laser and fluorescent light. The techno-logy has been industrialized across the world and become the mainstream technology in the world’s laser display field. The invention has won National Patents Awards five times.

The two were commended as leading role models and innovative entrepreneurs at the 40th anniversary of the establishment of Shenzhen Special Economic Zone.

The science award committee also set up a special award for COVID-19 prevention and control.

Liu Lei, president of Shenzhen No. 3 People’s Hospital, who was commended as a role model in the country’s fight against the COVID-19 pandemic in Beijing in September last year, won the Mayor’s Special Award for his contribution to the city’s COVID-19 prevention and control. He led a research team to formulate clinical experiences and practices of COVID-19 treatment, which have been introduced to many countries.

Among the winning projects, 79, or 77 percent of the total, were carried out by enterprises, showing the strong research capability of Shenzhen enterprises. Among the winners in the categories of Awards for Natural Science, Awards for Technological Invention and Awards for Technological Advancement, five were scientists from Germany, South Korea, Canada, Ukraine and Australia. The average age of the major scientists in the three categories of awards is 40 years old.

The science and research projects relating to COVID-19 prevention and control reached 12, accounting for 11 percent of the total winning projects.

A high-end inhalator for patients in severe conditions produced by Shenzhen-based medical equipment manufacturer, Mindray, was among the winning projects relating to COVID-19. The inhalator has made up 60 percent of the market share in China and has been sold to 68 countries and regions.

Between January and November 2020, the production value of Shenzhen’s high-tech industry was 2.54 trillion yuan (US$391 billion), up 3.3 percent year on year. The city’s investments in R&D made up 4.93 percent of its total GDP, leading the cities in China.