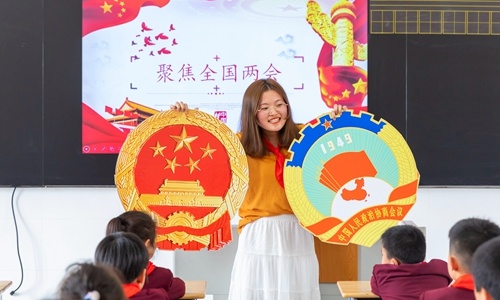 A teacher from the Chengnan Experimental Primary School in Hai'an, East China's Jiangsu Province, holds the Chinese National Emblem and the logo of the Chinese People's Political Consultative Conference to popularize knowledge of the annual two sessions in class. (Photo: cnsphoto)

Amid a resurgence of sporadic COVID-19 cases in some Chinese cities, deputies to the 13th National People's Congress (NPC) approached by the Global Times on Monday said that the form of this year's Fourth Plenary Session of the 13th NPC and Chinese People's Political Consultative Conference (CPPCC), the most important annual political event in China - collectively known as the two sessions - could be similar to last year's.

This would mean a limited activity range for attendees and online interviews. They also said that the national two sessions are unlikely to be postponed.

After the NPC announced on December 26, 2020 that the two sessions will convene starting from March 5 and March 4 respectively in Beijing, Li Zongsheng, a deputy to the 13th NPC and lawyer from Shenyang, Northeast China's Liaoning Province, told the Global Times on Monday that the current epidemic situation would not exert great influence over the two sessions.

If the incidence of sporadic COVID-19 cases ebbs around the Spring Festival, which falls on February 12 this year, the opening dates for the national two sessions are unlikely to be postponed, Li said.

Attendees are likely to only be allowed to move between the meeting places and their designated hotels. Outside activities could only be possible with permission from the related principal, Li said.

Also, the same as last year, attendees are very likely to be told to take nucleic acid tests at least twice before heading for Beijing and after landing in the capital, Li noted.

Ma Yide, another deputy to the 13th NPC and law researcher at the Beijing Academy of Social Sciences, told the Global Times that the national two sessions would be held as scheduled, as 2021 marks the beginning of the country's 14th Five-Year Plan (2021-25) and the main task for the convention is to approve the plan.

"Meanwhile, during this year's two sessions, many NPC deputies and CPPCC members will change their terms. If the two sessions were delayed, it would have affected the shift," Ma said.

Ma suggested the anti-epidemic measures during this year's two sessions could be relaxed a little from last year, as the country has gained more experiences in dealing with the virus.

Tam Yiu-chung, Hong Kong's delegate to the Standing Committee of the NPC, said that this year's two sessions could surely start on time, given the effective epidemic prevention and control measures taken across the country.

Separately, some regions that have been hit by COVID-19 outbreaks have vowed to adjust the opening dates of their local two sessions, reduce the duration of the meetings, and strictly control the scale of the meetings to achieve epidemic prevention and control.

Central China's Henan Province, which started the local two sessions on Monday, has shortened the meetings to three and one-half days. Previously, the normal length of the two sessions before the epidemic was five to six days.

Hebei has continued to report confirmed cases of COVID-19 since January 2 and recorded 769 local cases in total as of Sunday.

On January 12, Northeast China's Liaoning Province announced that the fifth session of the 13th Liaoning provincial people's congress would be postponed.

Liaoning reported seven consecutive days of zero new cases from January 11 to Sunday, after dozens of cases were recently confirmed in the province.

Both the provinces said the specific times of the local meetings will be decided later.

The city of Beijing is scheduled to start the fourth session of the 15th municipal people's congress on the coming Saturday and the session will be shortened to four and one- half days. The city said each plenary meeting will be limited to one and one-half hours.

The local two sessions in Beijing will be kept under close management and few reporters will attend the meetings after taking nucleic acid tests, Ma said.